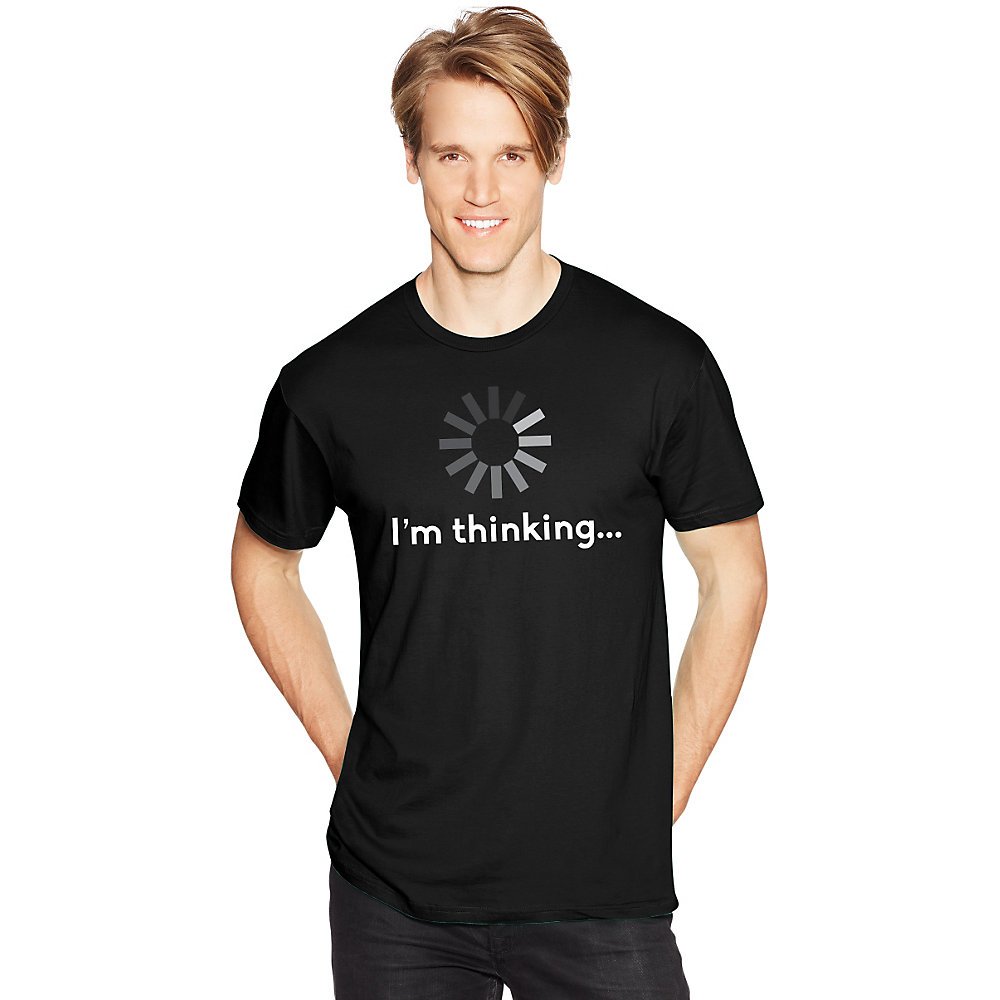 View on Amazon
It's really hard to write a bad review of a t-shirt but then I didn't receive a t-shirt, I received a package of women's panties. Now, under normal circumstances, this wouldn't be such a big deal but try explaining to your other half why you're receiving women's panties that aren't her size... Mind you, I'm a pretty clever guy but even I couldn't talk myself through (or out of) this one!

I bought this for a guy that usually wears an XL in t's, but it does run a bit on the smaller side, so I bought him and XXL and it fits him comfortable with a little extra room. So, if you want the shirt to fit snug, go with your usual size, otherwise size up. I think this shirt is hilarious! It's not as thick as some other t's but it's fine for the price and washes well.

Love the shirt so much! The writing on it, however, is rather crooked.

Packaged with great care, speedy delivery, and the material was surprisingly soft against my skin. Got several compliments including inquiries as to place of purchase.

Bought this t-shirt as one of my 17 YO son's birthday gifts . He loves it and get's a kick out of the graphic and phrase.

He is a medium and it fits well. He likes to wear it every chance he gets. That being said, I've washed the t-shirt several times and have had no issue of shrinkage or deforming. There has been no issue, so far, of the graphic wearing off (although it's been only a couple of months). The t-shirt seems to be of good quality as it is not thin.

Would definitely buy again as well as other t-shirts with different graphics.

The look of the shirt is great. The graphic looks nice. I've only washed the shirt once, so we will have to see about the durability of the graphic. I did wash the shirt inside out as is indicated for thermal transfer graphics.

The reason for the two star rating is the comfort and feel of the fabric. I purchased this shirt along with several other graphic novelty shirts from various vendors here on Amazon. I am disappointed to say that all of these shirts were made fabric that is very scratchy and rough to the touch. They are uncomfortable to wear. Even when sitting down, the shirt feels itchy, the long tag at the neck is constantly irritating and the inner side of my forearms are reddened just from resting against the rough fabric. No, I'm not allergic to the fabric. It's just rough, plain and simple.

So, delighted with the graphic, but quite disappointed with the fabric. I will not be able to wear this very often.

I like the design, but it feels a little small to me. I ordered several other shirts at the same time, in size 4XL or 4XLT, but I ordered this one in 3X, so I understood that it would not be as large as the others I ordered. However, up until this point, I've been getting by in the same 2XL shirts from Target, American Eagle, and Aeropostale that I've been wearing for... way too long, so I was expecting the 3XL to be bigger than the shirts I already owned. What I found is that it's about the same.

On the other hand, the 4XL and 4XLT shirts that I ordered from IZOD, Champion, and Adidas were all much larger than this shirt. Again, I expect they would be _some_ larger, but they were much larger. Considering that I had multiple brands in 4XL/4XLT that were all a bit too large, and a single 3XL that was slightly small, I think the 3XL was probably on the small side instead of all those other 4XL's being on the large side. This is still wearable for me, but there's not as much ease as I generally like in my shirts.

Cute shirt but I'm a big boy and got the extended size. I am not sure about the other cuts, but mine seems super thin and pretty small. In addition, the collar is really weird like an 80's flash dance type of woman's thing. I don't wear the shirt because of this. It doesn't look right

This shirt is the same quality as a Hanes or Gilden brand. It isn’t the really thick Gilden but the softer lighter one. It washes fine. Nothing wrong with the artwork and it didn’t shrink. It isn’t a long shirt. Hits my son just below the belt. Fits him just how he likes. He is 5’8. He usually wears medium and this medium fits like most of the other medium. If you are between a med and large go large.

If you've ever worn a Hanes shirt you know that they're very comfortable! I'm really happy with mine - it was a great price and feels good to wear, I'm actually wearing this one to work today! I generally wear Medium-size shirts and so this one fit just as I expected it to! The tag is in kind of a weird place - at the bottom inside stitching on one of the sides, but it can easily be removed with scissors and because it's at the bottom it won't scratch you if you cut it off!