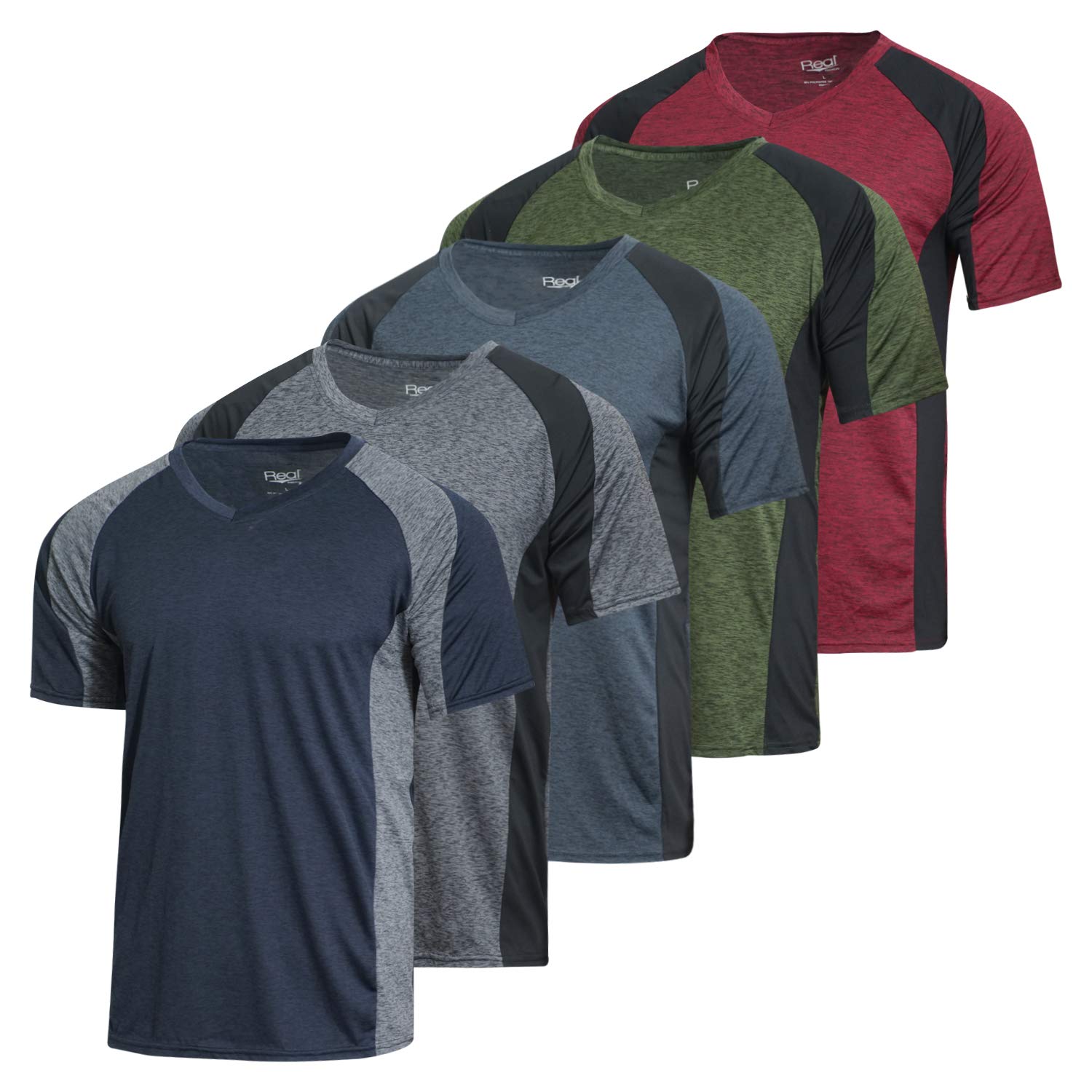 View on Amazon
Do not buy. These shirts look like a blind person put them together drunk. Poorly stitched and poorly cut. The shoulders look like I could put should pads in and still have room to spare.

XL people tend to be proportionately XL, but whomever designed these shirts didn't think of that... I've worn 2 of the shirts in this pack and found the neck opening to be a bit too snug on both. My XL body also has an XL neck.

In one case, the V wasn't even in the middle of the shirt, it was off-center to one side! And the shoulders were uneven, with one being rounded and the other much more square.

Quick hint to the manufacturers: Let your employees operate their sewing machines without the added adventure of wearing a blindfold and boxing gloves!

Still, the fabric is decent, so I expect these to hold their shape through wash cycles. Regardless of whether that's good or bad....

The fabric feels thicker pr different than other better brand dry-fit ones. I should had read better the reviews because as other people mentioned some of this tees are cut different. 2 of them are 1 inches (about 3 cm) narrower on the body, from under the arms to the bottom sides, like a size smaller, so they do not fit well under the arms, which them makes the neck to also feel tight because they tighter around the chest area. My husband has a size Large but prefers to wear XL, less fitted, and these fit more like a Large, more fitted around the body. As you can see in the photos, the one on top light grey one is narrower by 1 inch, but surprisingly then longer in the body by 1/2 inch. They are all labeled XL though. The shoulders are the same but right sleeve is shorter than the other left one They dark blue is also smaller and shorter with the opposite left sleeve smaller. It makes no sense. They're in a pack of 5, but 2 of them as useless. The fabric is not a comfy or light as other dry-fit ones that my husband has, so he does not think that they are going to work as well when it's hot outside. They are the Walmart fabric quality that I used to by for my son, but with not consistent fit. they also had some loose threads which makes me nervous to think what will happen if I wash them. Maybe they'll come apart... I guess that you get what you pay for since they're about $6 each.

I’ve never written a review before but I felt this deserved it. Ordered these V neck dry fit shirts because it seemed like a good deal. After ordering them I read the reviews and saw how everyone was bashing this product, so I tried to cancel. I was too late and seller already shipped, so I was ready to return them before even receiving them. When they arrived I was surprised they are very nice shirts for the money, fit comfortably, they run a little small, I usually wear a medium or large, so I ordered a large and the were a bit tight, but not enough for it to matter. All in all I learned that reviews are generally written by complainers (yelpers), the other 30,000 people who received theirs without issues probably wore them and enjoyed them just fine. The QC isn’t the best there’s a random thread hanging here and there, but not enough to give them 1 Star, everyone is over sensitive and likes to complain, but they’ve never lived in a 3rd world country to know what real problems are.

This fabric feel very synthetic and a bit rough to the touch. What's worse, the poor sewing causes them to pucker at the shoulders. It makes them look odd and feel awkward when you move around.

I'd spend a few more bucks on a better product if I were to do this again.

Polyester dry fit type shirts are usually very soft and silky. I ordered the set that came in gray, white, black and navy. The black colored shirts were somewhat scratchy feeling while the white and gray seemed to feel fairly soft. The V on the shirts sits very high up and is unusually tight. If you plan to wear these under something they will probably show. The shoulder seam on one of the black shirts began to unravel when I tried it on. Didn't try the white or gray ones on nor did I closely inspect their quality as I am returning the whole set. The white and gray shirts did seem to be better quality and much softer so the black ones seemed to be the problem.

So 1 out of the 5 shirts came defective. They also fit pretty big for a medium size and a little awkward. I really liked the material though.

I ordered these shirts for my husband with my fingers crossed because of the mixed reviews and apparent inconsistency based on other reviews.

The size does runs on the small side. My husband would normally take a Medium in a similarly constructed Nike or men's T-Shirt. The large fits him perfectly. For reference he wears a 40R suit jacket and has a 34" waist.

I ordered the 5 heathered color assortment and they are all very nice. They look good with shorts and jeans. Love the v-neck. They are slightly longer than most shirts these days which is welcomed. I would not describe these as wicking. They breathe to an extent, but if you were doing activities in the heat and humidity I would not reach for this shirt.

All the shirts have been washed at least once and did very well. They were all consistent and well constructed.