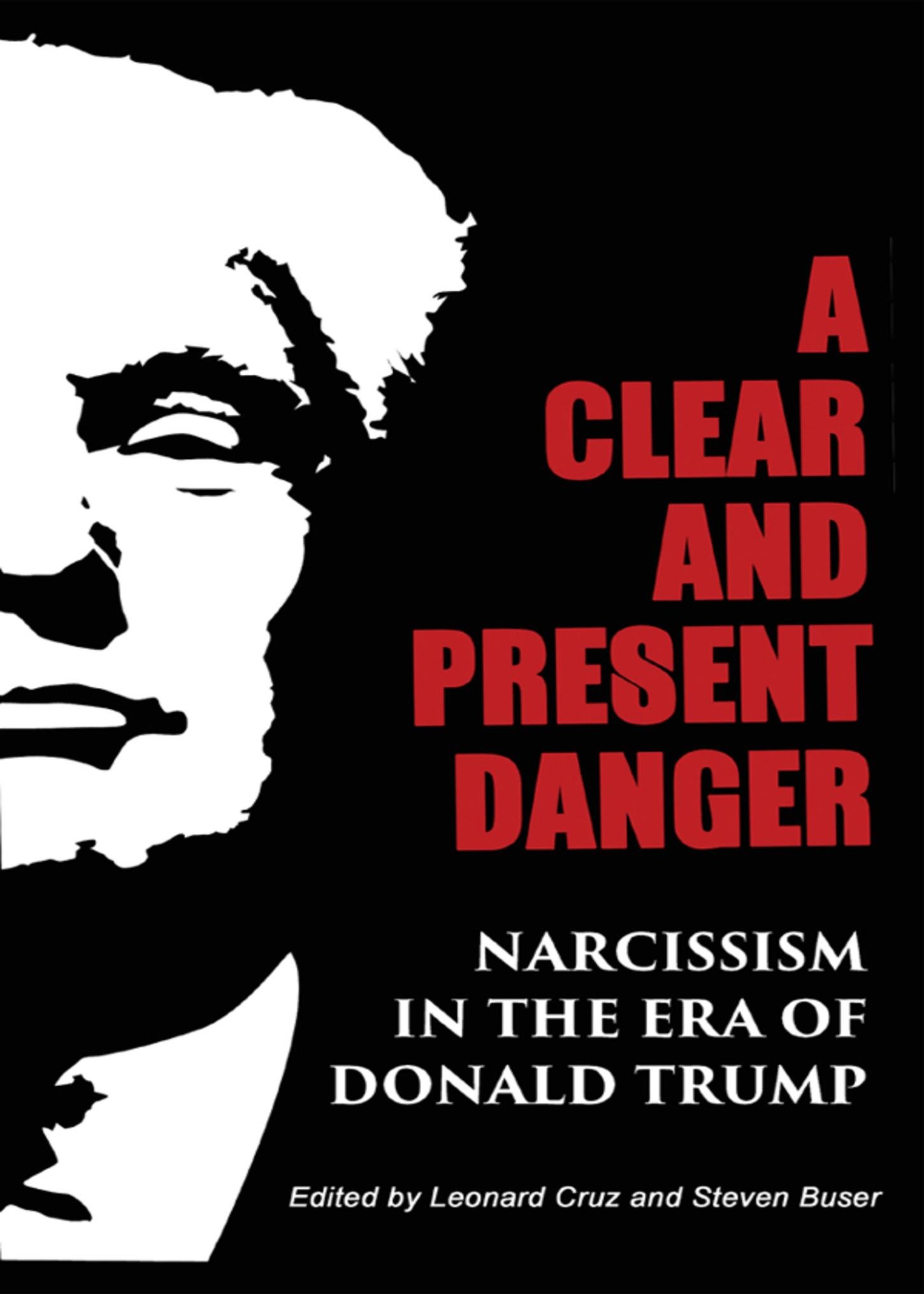 A Clear and Present Danger: Narcissism in the Era of Donald Trump : First Edition (Newer Edition Released 2017...."in the Era of President Trump"

PLEASE NOTE: THERE IS A NEWER EDITION OF THIS BOOK RELEASED IN 2017 WITH A SLIGHTLY DIFFERENT TITLE: “A Clear and Present Danger: Narcissism in the Era of PRESIDENT Trump.”

Narcissism is epidemic and there is scarcely a domain that is immune to its effects. A Clear and Present Danger: Narcissism in the Era of Donald Trump brings together bestselling authors, university professors, and practicing clinicians to explore this vital topic. “Every country has the government it deserves,” said Alexis de Tocqueville, author of Democracy in America. Whatever history eventually records about the 2016 presidential election, this frank and thoughtful exploration of narcissism will prove to be a timely and timeless study.

Narcissism demands to be mirrored and refuses to be challenged. It demands acclaim, obedience, and accommodation, while disregarding others. Whether narcissism overtakes the home, the workplace, or the national stage, everyone who comes under Narcissus’s spell, both the narcissist and their subjects, suffer.

Pundits insist that politics has seldom been as polarized as it became during the 2016 election in the United States. This was a coincidence of opposites, a coincidentia oppositorum. While Donald Trump galvanized vast numbers of angry, disaffected voters, Senator Bernie Sanders mobilized enormous crowds of young voters who seemed passionately committed to revolutionizing American politics. Regardless of the winner of the contest between Donald Trump and Hillary Clinton, it is vital to recognize what is happening on this global stage of politics. A Clear and Present Danger: Narcissism in the Era of Donald Trump explores the phenomenon of Trump as well as the vast landscape of narcissism in general.

The contributors share a hope that these essays will become a mirror for the reader and for a nation called to examine itself. Dr. Estés reminds us in the closing pages, “We were made for times like these.”


(For more information: trumpnarcissism.com)
View on Amazon
One of the most frequent questions regarding Donald J. Trump’s presidential campaign is: How is it possible that he can distort the truth, tell lies, insult not only significantly respected people but whole groups of people, and still not lose supporters? His connection to the truth and to respect seems to make no difference to millions of followers. Why is that? The contributors to A Clear and Present Danger: Narcissism in the Era of Donald Trump provide a thoughtful insight of the “Trump Phenomenon” by using professional psychology to analyze Donald Trump, the person, as well as the social identity of the population to which he so adroitly appeals. His high score on the scale of narcissist traits helps explain his behavior, including his self-aggrandizement and lack of empathy. But the analysis of the “group self”, or social identity of his followers who feel ignored, abused, and abandoned helps explain their rather blind and nearly unquestioned support despite his distortion of truth and insults of women and whole ethnic and religious groups. This extremely valuable book helps us understand how demagoguery works and how, from a psychological point of view, people will blindly hand over their freedom to a leader who articulates their frustration, and the louder the better. Charles W. Dahm, O.P. PhD

Psychologists, analysts, and helping professionals ought to be the first to weigh in on issues that have a significant impact on our culture, and they did just that in this fine collection of essays about narcissism. Well written and thought-provoking. I give it five stars as a must-read.

This book provides an understanding of not only our most recent election,but gives an understanding of the American psyche which
led to this type of a campaign and the history of narcissism in politics: healthy narcissism and unhealthy narcissism. The chapters are
written by 18 different renowned authors/psychologists and each chapter has a different focus. This is a must read book for all Americans,
regardless of political affiliation, to enable us to understand our President elect,the global stage which will be effected by this election,
and narcissism in general. This is one of the most compelling books I have read in a long time.

This is a single go to source of analytic expertise that will provide you with commentary rooted in the practice of Analytic Psychology. If you have arrived at this point and are reading this review ... and you purchase this book ... be prepared to be frightened. The consequences of having a person suffering unwittingly with the demons of malignant narcissism ... spouting fears and resentments while desiring only to be deeply loved and admired while gazing into the mirror of the TV Cell Phone Masses will be laid out for you articulately . It is not a quick read. You might have to deal with periodic episodes of grief and loathing as you come to realize how little control you have and how much risk there is for all the coming generations.

You won't want to put it down once you begin. An essential read for the 2016 election and beyond. This well-crafted book will captivate your interest as well as increase your knowledge. Don't miss the opportunity to read a riveting book with authors who will stimulate many conversations about these timely topics. This book would be particularly valuable as a personal read, included in a course, or as part of a book club.

Very informative of narcissistic condition and cause. Depressing to realize character traits are found in tyrants. Chapters by different authors are a bit repetitive n places.

Timely and thought provoking for anyone wanting a larger contextual understanding of the 2016 elections.

A very timely book although the authors take the view that you cannot psychoanalyse someone you have never met it's bringing a very interesting perspective to trump and pathological narcissism. You don't need to be jungian to understand it !!

A very interesting book with an important view on contemporary problems - also in Europe. Makes you think.

A most important topic that is so very relevant in the world today. Thank you to the many authors who produced it and made the subject very accessible to non Jungians as well as trained professionals.