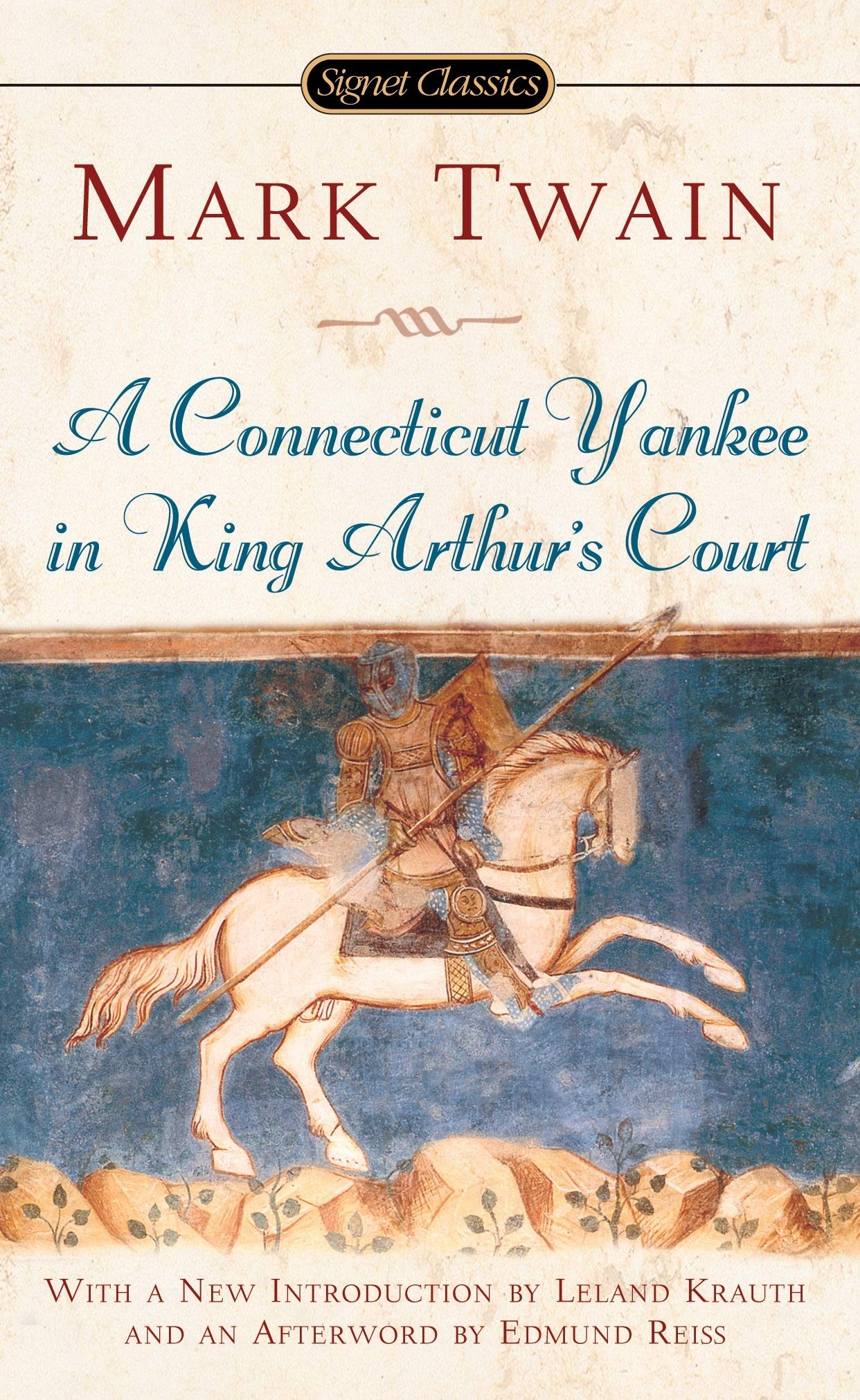 Cracked on the head by a crowbar in nineteenth-century Connecticut, Hank Morgan wakes to find himself in King Arthur’s England. After using his knoweldge of an upcoming solar eclipse to escape a death sentence, Hank must then navigate his way through a medieval world whose idyllic surface masks fear, injustice, and ignorance.

Considered by H. L. Mencken to be “the most bitter critic of American platitude and delusion…that ever lived,” Twain enchants readers with a Camelot that strikes disturbingly contemporary notes in this acclaimed tour de force that encompasses both the pure joy of wild high jinks and deeply probing insights into the nature of man.

With an Introduction by Leland Krauth
And an Afterword by Edmund Reiss
View on Amazon
Twain's time travel tale takes us back to the time of King Author and the Knights of the Round Table. Unlike most glamorous takes on the old tale, Twain paints a picture of absurdity, superstition, and human misery. The honor culture of brave knights and fair maidens is revealed to be a place of incredible ignorance, extreme poverty, and shameful inequality. The narrator of the book, Hank, finds himself unexplainably in sixth century England, where he quickly asserts himself as a magician by utilizing his knowledge of science and history. Fred is a remarkably competent man is able to begin a transformation of the realm into a more friendly and advanced place. Industry, politics, and universal suffrage are his aims, and he makes rapid progress in all three. The humor in the book centers around Hank outwitting the inhabitants of the past, especially Merlin.

As other reviewers have pointed out, the book is actually quite long. Parts feel repetitive and parts feel unnecessary, but it is still good writing and mostly enjoyable. I was expecting a light and easy read, and while this is not exactly that, it is still a great look into the witty mind of Mark Twain.

This Kindle edition was transcribed fine but there are some issues with spacing. Parts of the book have return carriages so that if your font is not sized very small, each line is broken up into a couple of smaller, truncated lines. This does not always make for a smooth read, but it is only in a few parts of the book, so no big deal.

Among the elements I didn't like were the monotonous dialogue; the bullying of an old civilization by a modern man; the lack of epic deeds, the linguistic anachronisms. My biggest happiness was when the novel ended. There are intense similitudes between this book and his story of the prince and the pauper, so it felt like reading the same story. Nevertheless Mark Twain is quite famous, I disliked this novel but you could instead love it.

The AmazonClassics edition is neat and professional. Highly recommendable, if you love Mark Twain.

The unquestionable master Sam Clemens, Mark Twain, wrote this marvelous piece to lampoon monarchy and organized religion. He also intended a large advertisement for science, technology, capitalism, and democracy. Well done. And the touches of Twain's acid-tongued humor make me laugh out loud.

After being hit in the head so hard that it "seemed to spring every joint in my skull and made it overlap its neighbor", Hank Morgan, a citizen of late-19th-century Connecticut, finds himself being chased up a tree by one of King Arthur's Knights. When he accepts that these people are not insane (Somehow the notion that HE might be in a delirium never occurs to him), he decides that, because of his vastly superior education, he'll be running this country within a few years. And he is. Then he decides to overthrow the ancient barbarities and institute true civilization. And he does. For a while.

Mr. Twain uses the notion of time travel the way the best fantasy and science fiction authors use their genres: to compare and contrast today's world. And, being Mark Twain, he does it well.

It's odd how the abused are curiously sheltered, as if their maturing stopped when they began to be abused and they never matured past that. So the cynic can be curiously naive.

This book came to me when I was about 11. I loved it and still remember large sections of it from that glorious pubescent reading. This, my second reading, I have read it a second time now, and I am now five years older than Twain was when it was published. Now I find it delightful and I laugh an adolescent's laugh (Truly little boys never grow up. Our toys just get more expensive) at his merciless tweaking the nose of authority.

But now I find naive the notion that Hank could have become "The Boss" and second in command of England as easily as that. Nor do I think his takeover could have been nearly so complete.

What rings true is how that takeover could come crashing down so completely, so suddenly. Twain believed in reason and education. I think tradition, prejudice, and emotion trump them.

That having been said, I love this book! I recommend it without qualification and I hope to hear rebuttals to my comments.

I last read A Connecticut Yankee in King Arthur’s Court as a preteen in the late 1950’s. I had thought it a rousing good story. I still love it, even more so that I now see that it is also a political treatise...one still very relevant to this day.

This time travel with Twain was exceedingly full of good humor, insights, and circumstances we experience even today. He was able to “modernize” those in his great story, and even goes one up on King Arthur and Merlin. You’ll experience every human emotion as you read this most enchanting tale! Thank you Samuel Clemens for this wonderful gift of Story!

This book is very uneven. It may give a name to the protagonist, but is clearly Mark Twain himself. The first half is funny, the second half is dismal. Twain must have gotten progressively more cranky and depressed as he wrote this. If you are a Twain fan, read it, as it certainly gives insight into an American’s perspective in the late 1800s. If you are not a Twain fan, don’t read this. In any case, be prepared for a “willing suspension of disbelief “

Samuel Langhorn Clemens, known best to us all as Mark Twain gave us some great tales. Of course, we have Tom Sawyer and Huckleberry Finn as well as other books and characters, and along with this some great satire and humour.

Here then we have a tale of a man (Hank Morgan) who claims to have gone back in time to the 6th Century and been at the court of King Arthur, at Camelot. I like that at one stage Twain gives a nod to Charles Farrar Browne aka Artemus Ward, the other famous American humourist, who influenced Twain and was a sometime mentor.

Often referenced by others as well as being influential we thus are taken to a medieval world where people seem to be gullible, superstitious, and believe in magic – as well as being dirty. Thus we see Morgan upstaging Merlin and trying to bring civilisation to the people he sees around him. Here then we see many of Twain’s bugbears being discussed and ideas being brought in to try and change things, and so we have a burlesque of the types of books that are in the Romantic tradition of King Arthur and chivalry, along with a satire of the world and how things can be altered.

Knights with advertising boards hanging from their armour, encouraging people to buy soap and wash is just one of the humorous things here as Morgan tries to modernise those around him and bring a bit of Americanisation to the English. This met with good reviews in the US, but over here there were some conflicting opinions, as some felt it was taking the pee out of our traditions and our past. In fact, if you read this you will see this is not so, as what applies to the old times was also familiar throughout Europe, and thus this is more an attack on the Catholic Church, slavery, the lack of democracy and so on.

In all this does make for a fun and thoughtful read, but to be honest I don’t think it can compare to some others of Twain’s works.

I read this book when I was 10 without difficulty, I'm now 60 and this Kindle version has been so incompetently scanned as to make in incomprehensible gibberish. Every time a page boy is mentioned becomes a web page, every book becomes an E book, the errors mount up. You have to read every word then decide whether a phrase or sentence actually contributes to the story or is just corrupted crap. I accept that 50 years ago I was closer to the language spoken by Mark Twain and that reading it now might be harder for me but there is no excuse to mangle the work of a fine author in this way. Gave up at 26%, how do I get my money back ?

Unfortunately this kindle version is missing the first part of the book. Although it starts from Chapter One, the book itself actually starts from a heading entitled A Word of Explanation, followed by How Sir Launcelot Slew Two Giants and Made a Castle Free, the The Stranger's Story, then Chapter One. Without reading the first parts, launching straight into Chapter One only mystifies the reader. Project Gutenburg has the complete version available to read.

The amazing time travel conundrum has tackled with great gusto by the literary giant. The flow of words is mellifluous and one can get drawn into the book filled with crafty humour.