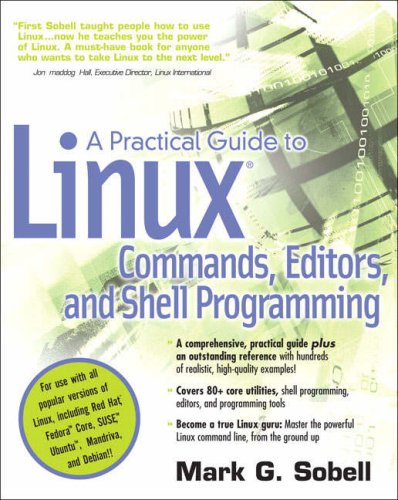 A Practical Guide to Linux(R) Commands, Editors, and Shell Programming

For use with all versions of Linux, including Ubuntu,™ Fedora,™ openSUSE,™ Red Hat,® Debian, Mandriva, Mint, and now OS X, too!

The Most Useful Linux Tutorial and Reference, with Hundreds of High-Quality Examples for Every Distribution–Now Covers OS X and Perl, Too!

To be truly productive with Linux, you need to thoroughly master shells and the command line. Until now, you had to buy two books to gain that mastery: a tutorial on fundamental Linux concepts and techniques, plus a separate reference. Now, there’s a far better solution. Renowned Linux expert Mark Sobell has brought together comprehensive, insightful guidance on the tools system administrators, developers, and power users need most, and an outstanding day-to-day reference, both in the same book.

This book is 100 percent distribution and release agnostic: You can use it with any Linux system, now and for years to come. Use Macs, too? This new edition adds comprehensive coverage of the Mac OS X command line, including essential OS X-only tools and utilities other Linux/UNIX books ignore.

Packed with hundreds of high-quality, realistic examples, this book gives you Linux from the ground up: the clearest explanations and most useful knowledge about everything from filesystems to shells, editors to utilities, and programming tools to regular expressions. Sobell has also added an outstanding new primer on Perl, the most important programming tool for Linux admins seeking to automate complex, time-consuming tasks.

A Practical Guide to Linux® Commands, Editors, and Shell Programming, Second Edition, is the only book to deliver