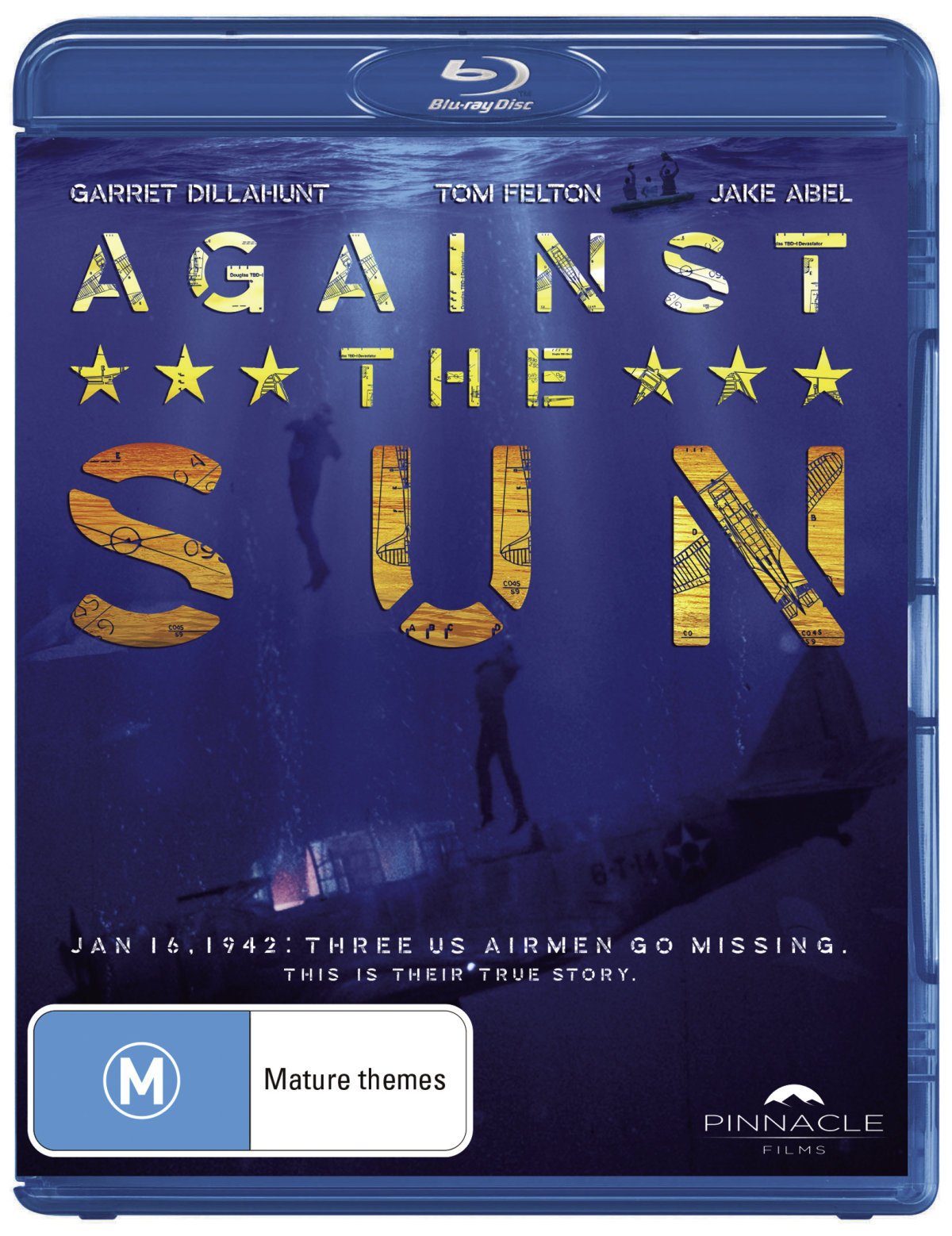 Against the Sun | NON-USA Format | Region B Import - Australia

View on Amazon
I think it's important for viewers to know that the makers of this movie are not your typical big budget, Hollywood types. If it was not for their posts on Facebook, I would have never known it existed in the first place. We all know how social media targets the interests we have by what we click on and then sends us ads to us for things we might buy. I am a huge WW2 buff and I like survival movies. Well, they found me. I could not find this film at Target, but Walmart had it for $10. It was worth the purchase. The American Film Company is an upstart that got going in 2008 by the family that owns the Chicago Cubs.

These type of movies are not for everyone. I have seen most of this genre. We have Alfred Hitchcock's "Lifeboat", Tom Hank's "Cast Away", "Swiss Family Robinson", "Shipwrecked", "Unbroken", "Sea Wife", "Robinson Crusoe"...I mean the list goes on and on...I am probably not thinking of or missing some other great films here. What my point is that considering what they had to work with budget wise, this is a very well made movie. Yes, it has it's production flaws, and I don't know who any of the actors are, but in a way, that is what makes it more real. "Against the Sun" is not a home run movie for the casual fan. Many may not like it at all. However, for those of us history freaks, we will take what we can get in 2015. Why? Because most movies today are all about CGI, superheroes, transformers, video games and things like that.

Finally, this is one of those movies where you need to watch the special features. It will only take about 10 minutes as they are short production clips, maybe 7 or 8 in all. But these will give you a greater appreciation of how the movie was made. Thank you The American Film Company. I look forward to watching your future movies based on history and facts.

Almost removed from my watch list after previewing the trailer, so do NOT judge by that. Based on a true story, my favorite type of movie as you actually learn something from history, plus at the end of this film, actual factual footage from the original men was shown. If you can survive the high blood pressure landing, then you still have the continuing stress of their 34 days and over 1000 miles on the sea. Beautiful score, gorgeous shots of waves that I've only seen on the North shore of Oahu, a surfer's dream, except these men were in a small rubber raft with no food or water or rations. Each man was a very different personality and each played their part perfectly, so much so I could feel every emotion they were experiencing. (Also brought back a lot of intense memories of my own 30 wilderness survival trip so perhaps I was a little more sensitive to their trip). These men went through the 5 stages of death and dying and resorted to prayer in their desperation. Only thing which didn't seem realistic was that they weren't more covered up to avoid sunstroke, but then we wouldn't have fully seen them and their ever changing expressions of anger, fear, desperation, hopelessness, relief, joy, and just about every other emotion one could feel in such a grave situation as this.

A tremendous film about three guys ... no one's an olympic hero or WW I fighter pilot (Eddie Rickenbacker) who warrants anything special. Three guys, tired, in the days very shortly after WW II's start ... of the carrier U.S.S. Enterprise. Not much happening in the way of technological improvements to fighter bombers so quickly after Pearl Harbor. Each makes mistakes that contribute to their running out of fuel and being off course, when they ditch. They land and have very, very little in the way of anything to improve their chances of survival. These are all young men from the Depression,one at least, with Civilian Conservation Corps background. I had a father in law who raved about how the CCC took him from impoverishment in the hills of Arkansas, may have given him a uniform and shoes, boots, and sent him to Montana. The CCC sure is needed now. Republicans (Repugs) don't know the myriad good the CCC did all over the country, certainly here in the West. Thousands of check dams, trails in the national parks, roads, etc., were made by the CCC. In fact, the CCC stood as a ready pool of young men who'd been trained as if in basic training in the Army. They'd learned discipline, and "how to do" things that these guys exhibit as they are in a life raft for 30+ days. No heroics, as in "Unbroken." Very low key. See "Mission of the Shark" to understand what torture it must've been to go five or more days with very little food, but worse, NO WATER when they were surrounded by water. That took discipline to NOT take a sip. One scene shows the pilot taking a sip. I've understood one good gulp of sea water would be enough to set off madness. But by the Grace of God, they're rained on.They manage to get some meat ... and eat some fish. And, avoid sharks. They become human beings certainly, in front of our eyes. I admired the hell out of these guys who managed to pull survival tricks out of their butts ... and combined their knowledge, and fortitude, without madness or brutality or competition over taking them. These were men who just went on to serve out the war in their own ways. Dead reckoning paid off in the end. So did prayer. That one was able to help the others pray ... wow. Prayer is often overlooked. As a combat disabled infantryman from Vietnam, whose survived death more than one www.desertexposure.com/apacheria
I can say, prayer has saved me alone, in a survival situation sliding and falling down a mountain, breaking my right ankle, having to set the ankle and get down the mountain on the shortest day of the year .... 21 December, 2009. I'd gotten some of that from infantry training. And, not some kind of: "I'm going to get good and mad and fight this!" but just: keep going. Pray. Do what you can. Know panic when it sets in. Panic is different for each person. Hurrying was panic. I'm glad I'd been alone hiking enough (as these guys had in different situations from their homes), to recognize it; pray; ask God (help me to slow down ... going too fast could cause a catastrophic event to cascade ... lose sense of presence and lose the situation & just flounder about). These guys were every bit as brave as the guy in "Unbroken." They did not have the prisoner of war experience he did in "Unbroken." Don't forget: the Japanese have NEVER apologized, formally, with reparations, to all the thousands of Western pows they killed in prisoner of war camps. The "Rape Of Nanking" was real. Yet, modern Japanese act like it didn't happen. At least the Germans have made reparations and deep, national amends. There is something dangerous about an entire nation (as Turkey with the Armenian Holocaust), pretending it didn't happen. But, these guys show American spirit and tenacity in a simple, straightforwardness that neither Germans or Japanese have when it's combined with being raised in a democracy. At least, for that era.

“Three men in a tub, And who do you think they were? The butcher, the Baker, the candlestick-maker: They all sailed out to sea; 'twas enough to make a man stare.”

It is an unusual story of epic proportions, and well told. I was mesmerized to say the least upon seeing three men’s courage, inventiveness, determination, strong tenacity of survival, and yes, their devotion to God. I felt the pain they suffered as well as the joy they experienced in this true tale of adventure. My only question is why it took so long to make it into a film.