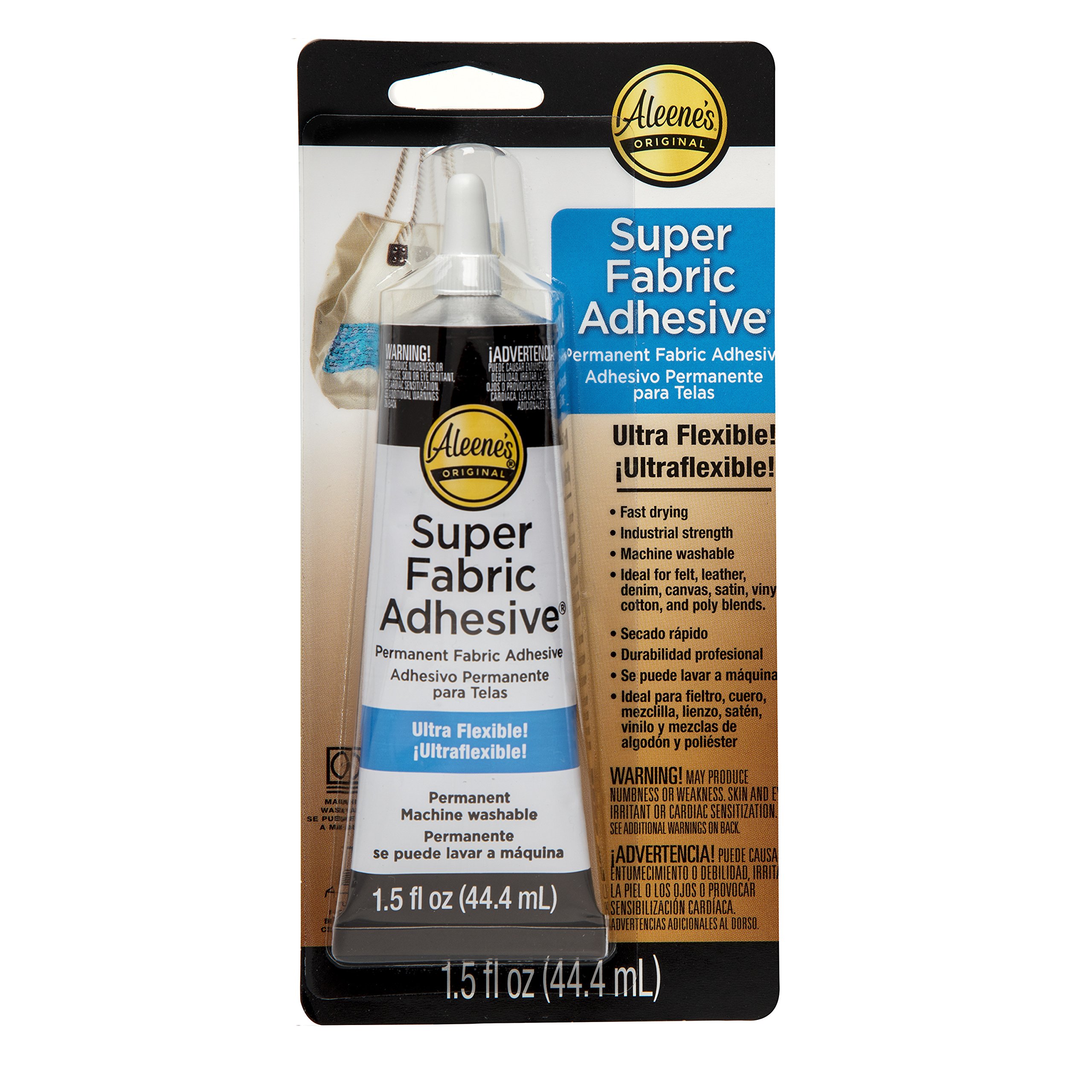 View on Amazon
OK. First run - purchased Dritz Liquid Stitch, Aleene's Fabric Fusion, and Aleene's Super Fabric Adhesive to glue patches (cut from sacrificial pair of jeans) to holes in my jeans. As expensive as they are I wanted to extend the life of them a bit. Dritz not so good. Aleene's Fabric Fusion does good but must be weighted or clamped due to liquid state of the glue. Aleene's Super Fabric Adhesive is much more viscous and therefore if the glue is spread evenly the fabric will stay put once placed. The two Aleene's products here have both stood up to 10 or so washes so far and are doing great. Before this I had no idea you could "glue" patches on. The Iron on patches I tried are junk and don't hold up to even one or two washes. Hope this helps folks out there! This stuff is great.

I bought a pair of climbing tights/leggings with seam-sealed construction, and there was a strip that was glued to cover the seam preventing snagging on rocks). After one accidental wash in hot water, parts of that seam strip became separated from the legging. I paid a considerable amount for the pants, and I had bought them while traveling and didn't have a receipt. Rather than try to return them and get another pair, I decided to try to repair them. I purchased this adhesive, and it did the trick! I had gotten some of the glue in areas that are visible, and unfortunately, you can see the glue. However, after a couple of washings, the strip is still holding tight. The leggings are made with synthetic materials (45% Nylon 34% Polyester 21% Spandex) and the glue worked just fine. It did just what I needed it to do and even exceeded my expectations.

I’ve been trying to find a fabric glue that truly works, on all types of fabric. This one does. I’m using felt, soft elastic, ribbon and Velcro.

Doesn't adhere to fabric at all. It's very pungent and when it dries, the fabric separates rendering it useless and a waste of $ Very disappointed.

Aleene's products used to be incredibly reliable. No longer. Very simply, you may as well use childrens glue made from flour and water. IT DOES NOT WORK! No more Aleene's products for me... ever. If only it were possible to leave Negative Stars. Thankfully, the item I had planned to use it on had no important or vital stress points that needed to be held. I threw the "Platinum Bond Adhesive Super Fabric" away. Total waste of my time and money; I then purchased "Gorilla 6770002 Micro Precise Super Glue, 5 gr, Clear". I found an excellent product in the Gorilla glue that worked better than anticipated.

Didn’t work at all. Used it to attach patches to a denim jacket and followed the instructions to the letter. Within a couple of days, the patches were already starting to peel.

Works well, however the warning on the box about it's toxicity is impressively scary.

I have collected patches from all over and wanted to put them on a large duffel. Since sewing wasn't an option due to pockets and zippers, I tried ironing them on, big fail. This glue is exactly what I needed. I've glued probably 20-25 patches using quite a bit of glue, around the entire outside edge of the patch and lines in the center, and used all of one tube and a bit of the second. I have not washed the bag yet, but they are holding on very well. There is a smell, but you'd expect that when you're using it. As soon as it dried, the smell was gone. The glue set quick, I was impressed overall.

This product has considerably reduced the actual amount in its tube over the years. I've been using this brand for two years and this time half of the tube was filled with air. I was very disappointed about that. Having said that, half the tube with the actual product works wonders and is the most heavy duty fabric glue I've found so far.

Wasn't very good. Messy application, was rubbery when dry. Used on a expensive jacket and ruined it. Won't use again.

It worked how I needed too, Although it has a strong odor even with windows opened and the back door open, Also didn't like how much adhesive slowing/quickly runs out of the tube when I place'd it down for a second.