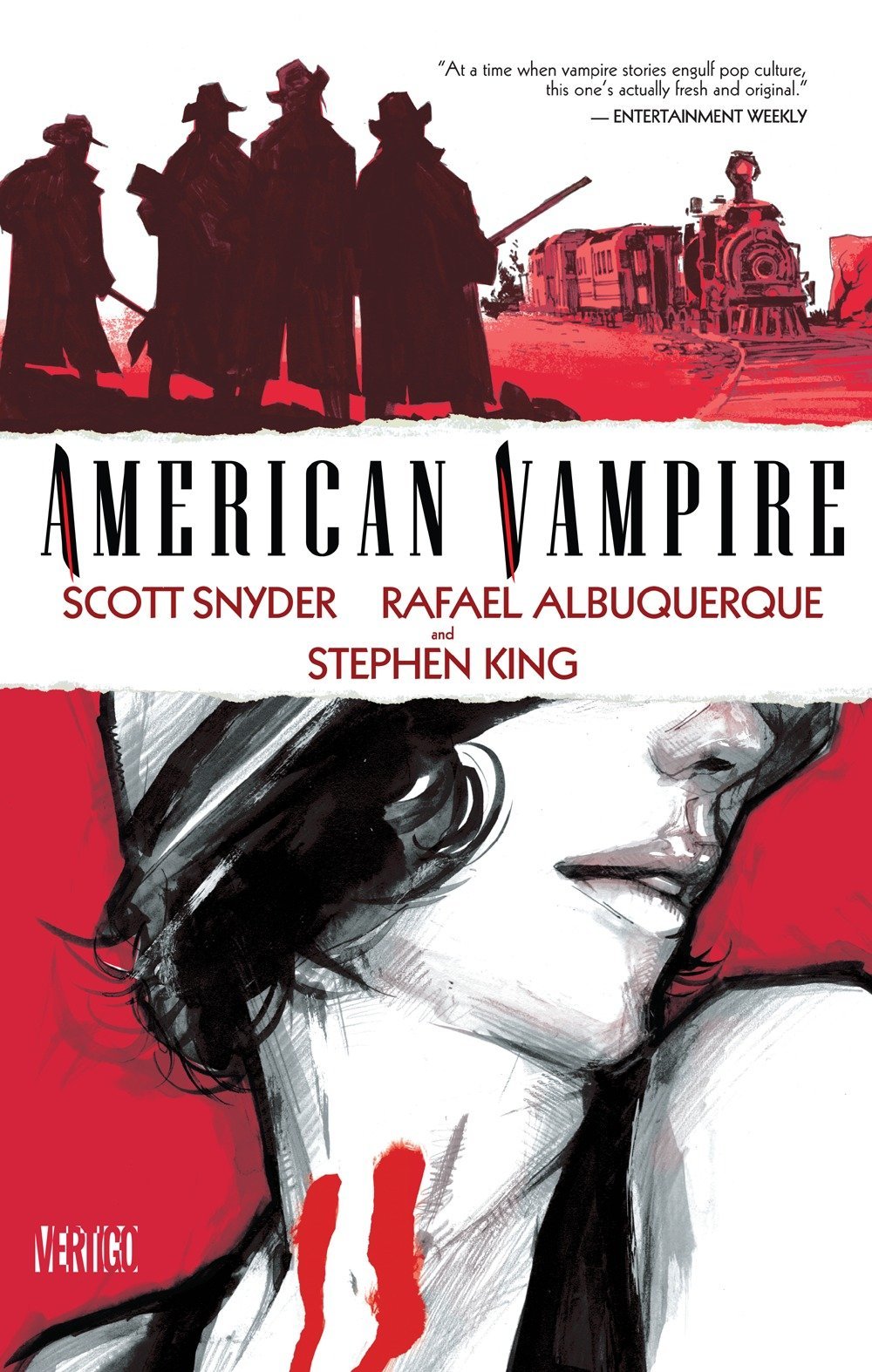 Posted by suryakiranfloral | Published 7 months ago

This volume follows two stories: one written by Snyder and one written by King. Snyder's story is set in 1920's LA, we follow Pearl, a young woman who is turned into a vampire and sets out on a path of righteous revenge against the European Vampires who tortured and abused her. This story is paired with King's story, a western about Skinner Sweet, the original American Vampire-- a stronger, faster creature than any vampire ever seen before with rattlesnake fangs and powered by the sun.
View on Amazon
American Vampire, Volume 1, comprises the first five issues of the ongoing graphic-novel series. This book features two interconnected stories—one by Scott Snyder, the other by legendary horror writer Stephen King—that provide a fresh take on the vampire mythos. King's story is set in 1880 and tells the grisly origins of notorious candy-loving outlaw, Skinner Sweet, who awakens from death after being infected by blood of the undead. Sweet is a new breed of vampire, stronger and faster than all the heretofore vamps. He's an American vampire, after all. Snyder's story, which takes place in 1920s Los Angeles, follows Pearl Jones, a struggling actress hoping to make it big in Hollywood. The naive Pearl is brutally attacked by a coven of European vampires and left for dead, that is, until Skinner Sweet revives her. Skinner then offers Pearl a chance to exact vengeance on those that killed her.

Artist Rafael Albuquerque deftly captures both the 1880s Old West and 1920s Los Angeles. When it came to translating Stephen King's story, the artist gave the panels a grungier look that blends perfectly with the untamed Western motif—a roaring contrast to the effete Art Deco style of mid-1920s Hollywood that occupies the other half of the book. He relies heavily on shadows and black profiles, but also suffuses the daytime portions with strong desert sunlight. Albuquerque delivers a brilliant vision of deadly vampires that's similar to Ben Templesmith's red-smeared approach in 30 Days of Night. Horror readers will lap up the moody, macabre artwork of American Vampire.

As for the narrative, you really can't say enough about the expert storytelling that we've come to expect from Stephen King and Scott Snyder. King's opening introduction gets to the bloody heart of why American Vampire rises above the undead deluge that's reduced the classic vampire monster to "anorexic teenage girls [and] boy-toys with big dewy eyes." Both writers have a strong knack for creating real and likable characters. Pearl Jones is an especially appealing protagonist, a strong young woman with dreams of fame yet she's afflicted by doubts and homesickness. Less endearing, though, is the wonderfully psychotic and impulsive Skinner Sweet with his flaxen hair and insatiable sweet tooth; the dude makes for a memorable anti-hero. Still, what I liked most about American Vampire is its innovative and refreshing spin on the vampire mythos, with the elder vampires seeking to control the younger breed (which they see as an 'abomination'). Yet, in fine American tradition, this new species of vampires refuses to become the inferiors of the European bloodline and savagely battles for control of the West.

American Vampire, Volume 1, is a promising start to a series that seeks to change the contemporary perception of vampires as teenage heartthrobs. Unfortunately, because Stephen King was only contracted to the first five issues, I haven't bothered to read the subsequent volumes. Nevertheless, Volume 1 is vibrant, creepy, and wonderfully gruesome, and best of all, its rich and expansive plot works well as a stand-alone story. Because it's ultra-violent and incredibly dark, I wouldn't recommend it for younger readers. Twilight twinks would do well enough to avoid this book, for they'd be unable to fathom the idea of vampires as remorseless killing machines. Modern-day horror literature is congested with romanticized and hypersexualized representations of vampires, but it's laudable yarns like American Vampire that strive to recapture the vampire genre—it's a refreshing and thoroughly enjoyable romp. This is what a vampire story should be!

There are many reasons to appreciate this innovative and refreshing take on the vampire mythos. Scott Snyder,Raphael Albuquerque, and the iconic Stephen King have successfully created a modern Vampire tale that reimagines these immortal creatures as the terrifying monsters they were intended to be. Let me begin my review by attempting to distinguish Snyder's American Vampire series from contemporary vampire fiction. In this day and age, there are certainly enough choices available for vampire enthusiasts and readers of supernatural fiction--but this wasn't always the case. A generation or two ago, vampire tales in books and movies were less prevalent and created with the sole purpose of terrifying and frightening their respective readers and audiences. Beginning in the late 1970s, something changed. Having grown up in this era, I recall that it seemed Americans overnight lost their revulsion for -and became enamoured with- the undead. Vampires went from scary to seductive overnight, as movies, books, and television began to focus more on the notion of immortality being a gift or a blessing rather than a burden; the recipients of a vampiric kiss being 'chosen' rather than 'cursed' with an affliction. In the 21st century a plethora of new and very popular vampire stories have been neatly packaged,mass marketed, and sold for consumption in a variety of formats to a younger generation of teen horror enthusiasts. MY generation wanted to stake them and this generation wants to date them. But I digress, so let me begin by offering my take on the first installment of this remarkably brilliant and original series--The American Vampire.

***minor spoilers ahead***The first story is written by the talented Scott Snyder and begins in the decadent atmosphere of 1920s Hollywood. We meet Pearl Jones, a young, struggling actress from Kansas who is desperate for her big break in the nascent motion picture industry. Pearl is a central figure in the American Vampire mythos, a heroic young woman destined for so much more than part-time waitressing and her fledgling acting career. Unbeknownst to Pearl, lawyers weren't the only bloodsuckers in 1925 Hollywood! The second story in Volume 1 is told by none other than Stephen King. In King's story, we are taken back to the American wild west of the 1880s. The reader is introduced to the main character of the series, the psychotic, impulsive, and reckless outlaw Skinner Sweet. It doesn't take Skinner Sweet long to draw unwanted attention from a powerful group of vampires who resolve to eliminate him for interfering once too often in their own criminal activities. The fearless gunslinger was attacked and left for dead by a particularly nasty Carpathian vampire--but of course Skinner Sweet wasn't dead in the literal sense of the term. Certain fluids were transferred in the scuffle, and a careless vampire unknowingly sired the most unique vampire in the history of vampire lore. Stephen King really made this story a compelling and interesting read.

I would be remiss if I didn't praise the incredible artistry of Rafael Albuquerque. His depictions of the gritty reality of the Wild West and his illustration of early 20th century Hollywood are nothing less than artistic genius in my opinion. I thoroughly enjoyed his interpretation of Skinner Sweet--the flaxen haired, grinning, candy chomping cowboy in an overcoat. It would be difficult for me to imagine the American Vampire series with any other artist than Rafael Albuquerque; the story arcs would lack poignancy and the vampires couldn't possibly be as terrifying without him.

In a world congested with romanticized and hypersexualized representations of vampires, I find the American Vampire series to be a unique, refreshing, and thoroughly entertaining romp. If you love a captivating and scary vampire tale and are tired of "sweetie- pie" vampires, then this series is worth your investment. I cannot recommend it highly enough. 5 stars aren’t enough.

This graphic novel grabbed my attention for a couple of weeks so far and i was curious about it for a good while thinking that this was gonna be like, "40 days of night" but wow Im glad i've gotten this comic cause its surpassed my expectations; While the story jumps back and forth between the decades it still keeps you interested in the Dark adventures of the Anti-hero, Skinner Sweet an outlaw that ran into unfortunate circumstances when he crosses paths with an elder Vampire and that's where things get VERY interesting VERY fast. I have to one again admire Stephen King for this collaboration cause you feel his writing as well as his influence there were one very particular 'Shining' Easter egg in one of the stories that made me to believe this story will be connected to some Stephen king novels eventually and I would be happy to see something like that happen soon.
Although this is only the first volume I will tell anyone to pick this up; not only its dark, Violent, bloody, and funny it has a compelling story that rivals these teen crappy vampire shows and movies.

the artwork is pretty good but like i said its the story that keeps you gripped; So give 'American Vampire' a read...you'll thank me later. lol

American Vampire is a fresh take on the vampire genre from author Scott Snyder (who wrote the excellent Batman Black Mirror).

I'll admit I left this a long time as I was quite jaded on what the whole vampire romance fad had done to the genre and didn't really think it would engage me.

I'm happy to say I got it very wrong though. Snyder introduced a new breed of vampire with a new set of rules, going back over the history of how the first emerges during the later days of the wild west and the emergence of the second during the early days of Hollywood.

Snyder has put the horror back into vampires here, the new breed find themselves at odds with dreadful sadistic aristocratic European vampires who managed to make my skin crawl in most scenes they appear in, slaughter being simply an every day backdrop to their lives.

Fantastic book and the best horror comic I've read in ages. I'll be collecting the rest of this series.