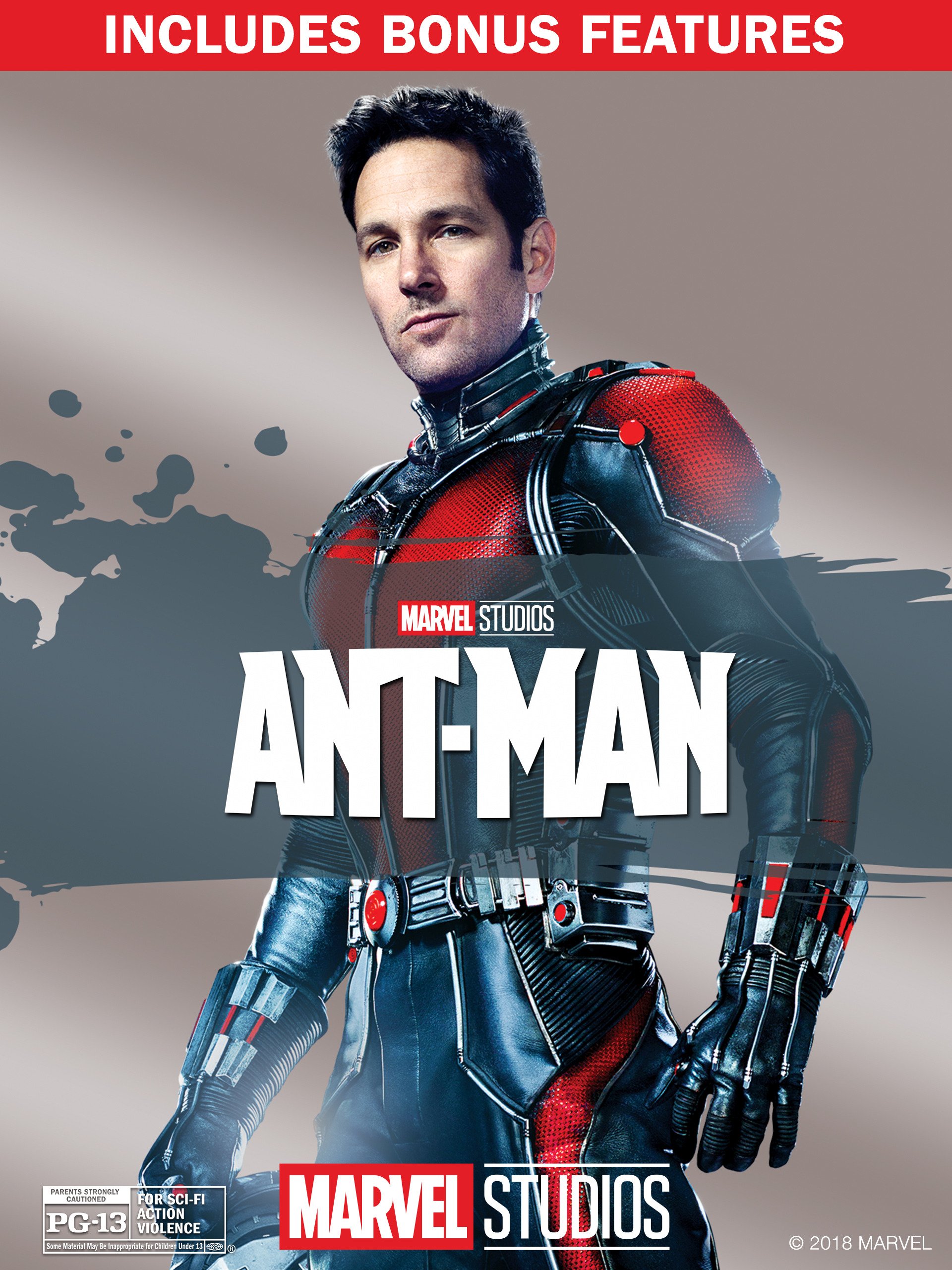 View on Amazon
When I originally saw the first footage for Marvel’s Ant-Man, I have to admit I wasn’t exactly hyped to see the film on opening night. I always thought that Paul Rudd was a perfect casting choice to bring the larger than life character to the big screen, but the first few trailers just didn’t grab my attention and it seemed like the movie was having trouble finding its tone. Was this going to be an all-out comedy, or balance things out with a healthy dose of action and drama à la last year’s Guardians of the Galaxy? Thankfully, the finished product turned out to be one of Marvel’s most entertaining and original films to date, wrapping up Phase 2 nicely.

Paul Rudd knocks it out of the park in this immensely enjoyable action/comedy superhero film from Marvel Studios. Scott Lang (Rudd), a master thief with a heart of gold, teams up with Dr. Hank Pym (Michael Douglas) to stop a powerful weapon from getting into the hands of the malevolent Darren Cross (Corey Stoll), Pym’s former protege. Armed with the amazing shrinking and strength-boosting abilities of Pym’s Ant-Man suit, Lang aims to right the wrongs of his past and become a hero in the eyes of his daughter. If he can succeed, The Avengers might just have a spot open for him on their team.

It’s obvious from the outset of the film why Paul Rudd was chosen for the role – he’s one of few very actors who could make a criminal charming, and his spot-on comedic timing and chemistry with Michael Pena provide some of Ant-Man’s most memorable moments. Evangeline Lilly plays the part of Pym’s estranged daughter Hope quite well, offering up a few moments of badassery as she teaches Scott how to fight and use his newfound abilities. Michael Douglas plays the part of Dr. Hank Pym beautifully – you could feel the character’s sense of despair and regret about the events that caused both Hope and Darren Cross to distance themselves from him. And Corey Stoll plays Darren Cross with an intensity that really sells the character’s descent into madness, as he stops at nothing to recreate the Ant-Man technology just to sell it on the black market. The character may be a bit one-dimensional, but Stoll makes Cross both memorable and intimidating.
The first thing that caught my attention with Ant-Man were the impressive visual effects. The shrinking abilities of Ant-Man are well portrayed, allowing the audience to suspend disbelief long enough to become invested in Scott’s story. Aspects such as the digitally recreated bathroom where Scott first utilizes his shrinking powers are overflowing with detail, right down to the texture on the tiles, the grimy grout, and spiderwebs between the floorboards. It really helps sell the illusion, as you never feel as though Rudd is running in front of a green screen (although that’s obviously what happened).

Perhaps the most effective and remarkable use of CGI in Ant-Man is the de-aging effect used for Michael Douglas in flashback scenes – he looks just how you’d remember him from 80s films like Wall Street. A kickass battle against Falcon at Avengers HQ manages to effectively showcase Ant-Man’s abilities and paint him as a formidable fighter that could stand beside Captain America and Thor on the team. I should also mention that once again Marvel Studios’ costume designers are amazing; the Ant-Man suit from the original comics is difficult to translate to the big screen, but they absolutely nailed it, and the Yellowjacket suit may be even cooler.
Ant-Man’s Digital HD copy features extras like a gag reel, deleted scenes, and featurettes on the creation of the CGI sequences. There’s also a bit of backstory on the comic character’s origins and some commentary on the deleted scenes from the director and Paul Rudd. One of the deleted scenes, in which Scott Lang cases Pym’s house as a cable guy, was truly great and had me wondering why it was left on the cutting room floor.
Overall, Ant-Man is a surprising success – after the first trailer was met with a tepid reaction from fans, Marvel and director Peyton Reed managed to turn the tide and give us one of the most memorable and creative films in their lineup (and one of my new personal favorites). I’m thrilled to see lesser-known and more “out-there” characters like Ant-Man and Guardians of the Galaxy not only making their way to the silver screen, but finding great critical acclaim and financial success. As a longtime comic fan, I can’t wait to see Scott Lang teaming up alongside the Avengers (and Spider-Man!) in Captain America: Civil War – it’s one of those things I thought would never actually happen, and the kid in me couldn’t be more ecstatic.

Once again, i was totally amazed at how well they pulled off Ant-Man. he was the only person from the MCU, which i was a little uncertain as to how Marvel was going to bring him into the story Arch. how they pulled it off totally surprised me, and it worked really well with the existing plot line of the arch of the MCU. personally, i like the movie version MUCH better than the comic book version of Ant-Man, as in the comics, he was really unstable (Crazy), and i really like the new direction they have taken him. it was brilliant how they filmed this movie in the theme of a bank hist. they could have really done a dis-service to this movie by going strictly by the comic book, and they would have killed the movie. very bold move on the part of marvel to remake the origin story. i think it works alot more cohesively now. i cant wait for the next Ant-Man. P.S. LOVED him in captain america civil war! he stole the show along with Spider Man!

When I received my package, I knew this movie was going to be good. I had already seen it in theaters. It was a really good role for Paul Rudd. When I opened the case, I found a slip inside that says "Get a reward now. Enter your action code at MarvelsAntManOffers.com" which prompts me to enter a redemption code. When I enter the code it says "Invalid Code". Suffice to say that I do not own this movie on Blu-ray & Digital like had hoped. I only own the blu-ray version which means I have to have the disc with me to watch it or put the disc in to watch it. This has been the most ridiculous experience I've ever had with an Amazon blu-ray purchase and I can't honestly tell if it's a Amazon issue or a Marvel Studios issue.

I'm a fan of most of the recent movies Marvel has brought to the silver screen. I can't say Ant-Man is my favorite Marvel. But I've watched it a number of times and each time I'm entertained by the action with the sprinkling of comedy. So to include any spoilers, I'll simply say the story is a little slow at the beginning and maybe into the middle as the develop the characters, but has a good finish. Turn toward the cast, I'd have to say I like some of Paul Rudd past works (not all). Given his past roles, I just never really pictured him as the action/hero actor. So I was pleasantly surprised at how he brought the character to life. It was no surprise to me that I found veteran actor Michael Douglas' role in this film as Pym to be very entertaining; very good casting.