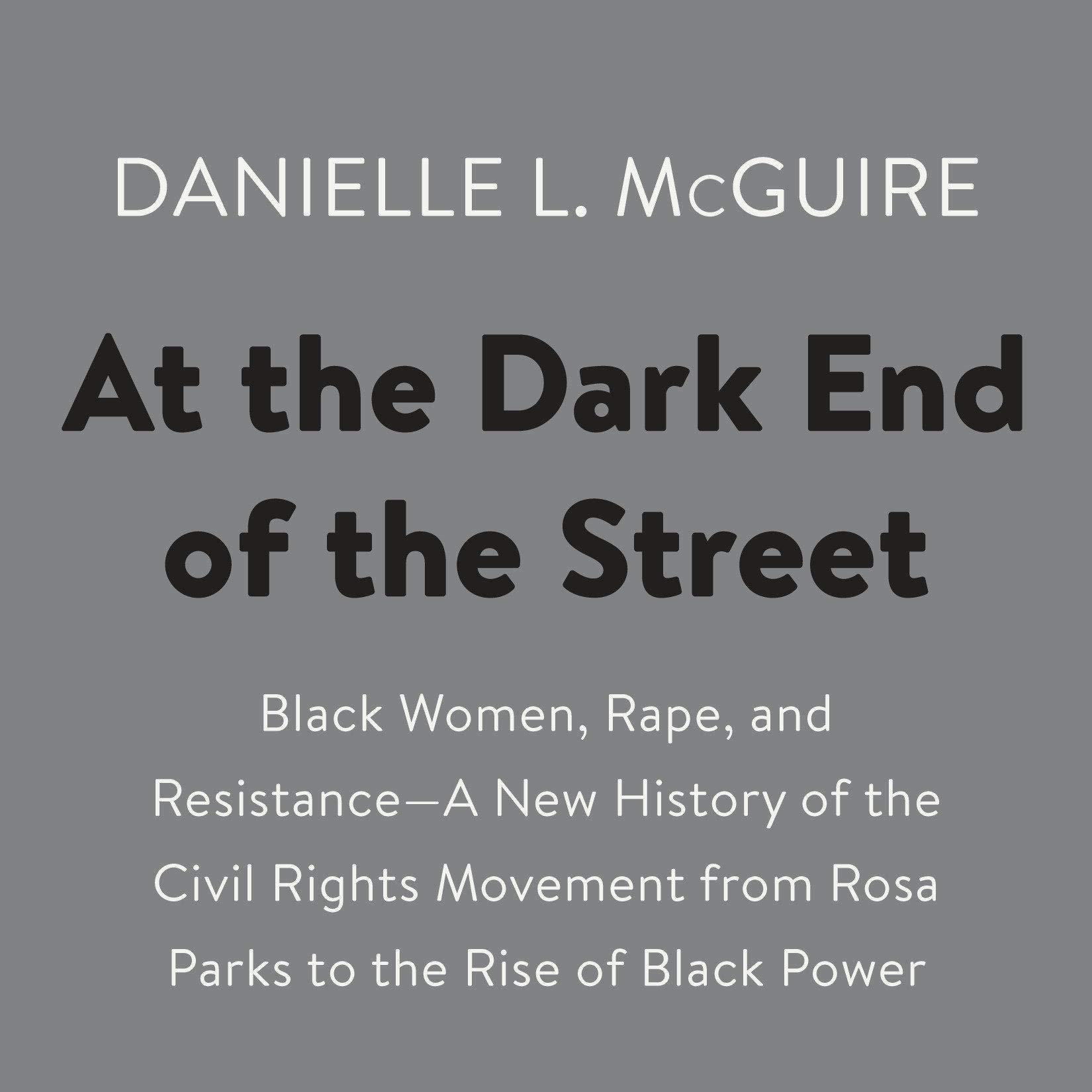 At the Dark End of the Street: Black Women, Rape, and Resistance - A New History of the Civil Rights Movement from Rosa Parks to the Rise of Black Power

Rosa Parks was often described as a sweet and reticent elderly woman whose tired feet caused her to defy segregation on Montgomery’s city buses, and whose supposedly solitary, spontaneous act sparked the 1955 bus boycott that gave birth to the civil rights movement.

The truth of who Rosa Parks was and what really lay beneath the 1955 boycott is far different from anything previously written.

In this groundbreaking and important book, Danielle McGuire writes about the rape in 1944 of a 24-year-old mother and sharecropper, Recy Taylor, who strolled toward home after an evening of singing and praying at the Rock Hill Holiness Church in Abbeville, Alabama. Seven white men, armed with knives and shotguns, ordered the young woman into their green Chevrolet, raped her, and left her for dead. The president of the local NAACP branch office sent his best investigator and organizer to Abbeville. Her name was Rosa Parks. In taking on this case, Parks launched a movement that ultimately changed the world.

The author gives us the never-before-told history of how the civil rights movement began; how it was in part started in protest against the ritualistic rape of black women by white men who used economic intimidation, sexual violence, and terror to derail the freedom movement; and how those forces persisted unpunished throughout the Jim Crow era when white men assaulted black women to enforce rules of racial and economic hierarchy. Black women’s protests against sexual assault and interracial rape fueled civil rights campaigns throughout the South that began during World War II and went through to the Black Power movement. The Montgomery bus boycott was the baptism, not the birth, of that struggle.

At the Dark End of the Street describes the decades of degradation black women on the Montgomery city buses endured on their way to cook and clean for their white bosses. It reveals how Rosa Parks, by 1955 one of the most radical activists in Alabama, had had enough. “There had to be a stopping place”, she said, “and this seemed to be the place for me to stop being pushed around.” Parks refused to move from her seat on the bus, was arrested, and, with fierce activist Jo Ann Robinson, organized a one-day bus boycott.

The protest, intended to last 24 hours, became a yearlong struggle for dignity and justice. It broke the back of the Montgomery city bus lines and bankrupted the company.

We see how and why Rosa Parks, instead of becoming a leader of the movement she helped to start, was turned into a symbol of virtuous black womanhood, sainted and celebrated for her quiet dignity, prim demeanor, and middle-class propriety - her radicalism all but erased. And we see as well how thousands of black women whose courage and fortitude helped to transform America were reduced to the footnotes of history.

A controversial, moving, and courageous book; narrative history at its best.

View on Amazon
Should be taught in all schools. It documents the special ongoing oppression of black women by rape. They grew up knowing their bodies were not their own but the property of any passing white. This book documents the courage with which they fought back against overwhelming odds to report these crimes and receive legal justice and the ongoing failure of state and federal powers to take steps. The bus boycott was organized and led by women against a system where bus drivers were free to beat them and sexually harass them. Many were beaten and raped and lost their jobs but in the face of death did not give up. The crimes detailed here are horrid to read but the courage of the women and men who protested should not be forgotten. The book has a lot of footnotes and a long bibliography for those who want to read more and she has interviewed many who took part. Others have pointed that Rosa Parks was an active freedom fighter and that other women had been protesting bus unequal practices. It is well written and very readable. Mike Ditka football player who just stated there has been no oppression in 100 yrs should be forced to read this. If he is going to make stupid statements he should know his facts.

I want to tell every white person to read this book. To read it all the way through and then sit down and think about it. Take notes. Think about it some more. Does this narrative match what you learnt at school? Does it match your experience growing up? Does this USA resemble the USA you have been living in?

At the Dark End of the Street is a hard read. Inside we learn about what happened to Recy Taylor in detail. About all of the work Rosa Parks was doing years before she refused to get up from that bus seat. About the countless cases of brutality and rape of black women by white men. Of the countless cases where white women called rape on innocent black men. Be prepared to be sickened by the institutionalized suffering, and also by the fact that your fellow humans doled this violence out on a daily basis, and still do.
A detailed and acute research on the involvement and importance of women in the civil rights movement, this book is also a deep insight into the horrific and widespread use of sexual violence by white men to keep black women silent and to exert dominance. Sexual violence is often used as a weapon in war, we have seen many examples of this in the past and in the present, but the extent of its use in the US, and how it was constantly disregarded by the authorities, or even used against victims, is abhorrent. But these stories must be told because they should never be erased and forgotten.

In addition to being a huge minefield of information, events, and facts that are not taught in history books, this book is an important reminder of how black women’s voices have been consistently erased through time. Their overwhelming role in the Montgomery bus boycott reduced to a mere footnote, the tireless activism years and years before the civil rights movement took off stuffed away in the vaults of an archive, and the work that they continue to do on a daily basis forgotten. There is so much important information in this book, sometimes it actually feels overwhelming and frustrating at the same time because it really should be common knowledge.

I initially got this one from the library, but I bought a copy for myself as I feel like I only scratched the surface by reading it once and need to be able to refer back to it again and again. Can we add this book to the curriculum please? My kids will be asked to read it as soon as they are old enough to.

This was an excellent book. I read it for a Women's Studies course and am so glad I did. It is a hard read at times due to the subject matter and I got chills over and over with every page I turned. This is a dense read so full of information, facts, and, the best part in my opinion, stories that hit you straight in your emotions (I am not ashamed to admit I got a little teary eyed at times). The Civil Rights Movement in the US is definitely taken for granted and has been whittled down to little bites of history where MLK Jr. is glorified and positioned as the center piece but if you read this book you'll learn there was so so much more to it and that once again history bears its burden on the backs of so many brave black women.

As an African American woman who grew up in segregated Atlanta, I felt violated while reading about the rapes and indignities by white men against black women. I often rode the public bus home from school and the bus drivers were all white and nasty. This book brought up all those feelings and more. I will never understand how white women who had consensual relations with black men could accuse them of rape when they knew those men would be tortured and lynched by mobs. The depravity of those killing mobs is incomprehensible to me. If you don’t know this history, educate yourself.

If you thought that the Civil Rights Movement began in the 1950's or 1960's, that Rosa Parks was a reticent old woman with tired feet, that the movement started suddenly after her refusal to move from her seat on a bus, I urge you to read this. You'll learn:

- that Rosa Parks was raised a Garveyite, and had been an activist and NAACP leader for more than 20 years when she famously refused to move from her seat,
- that this very seat was located on a bus whose driver had (less famously) harassed Ms. Parks 10 years before, and that she also knew E.D. Nixon was searching for a victim of racial violence who was "beyond reproach" to gain national media attention,

and SO much more!

I should add that I usually find history books a little boring, but this was very readable...

Whites Only and Colored only signs come to mind when one thinks of the post reconstruction Jim Crow South and legalized segregation that kept Back Americans in state of inequality and injustice by white supremacy. The author's work points out how sexualized violence against Black women was, and is, at the core of white supremacy. Black women were raped and denied justice in most cases, but it was their testimony of their victimization, despite the denial of justice, that allowed their stories to be told and efforts for justice mobilized for them. A very good read for what was really the seedbed for the civil rights movement.

An amazing book that virtually rewrites the history of the Civil Rights Movement. The detailed case histories, the crimes, testimonies, and the nature of the trials is indeed shocking. We get to know who was Rosa Parks, how the Montgomery Bus Boycott of 1955 was organised and by whom, and how the civil rights movement was rooted in the long history of African American women's struggle against sexual violence. We learn the names of many forgotten persons who had spearheaded the movement and spent decades resisting white supremacy, names that have been obliterated from history. One is compelled to wonder whether Martin Luther King, Jr. was merely lucky to find himself at the right place at the right time. On March 2nd, 1955, Claudette Colvin, a schoolgirl was arrested for refusing to give up her seat on a bus, saying "I'm just as good as any white person." On October 21st Mary Louise Smith, an 18 year old housemaid was arrested for a similar offence. Rosa Parks repeated the offence on December 1st and it was her name that went down in history. Jo Ann Robinson played a crucial role in organizing the bus boycott, but nobody ever heard of her. That's why the book asks to be read.

Sobering and Inspirational. It gives people the impetus to tell their stories. A must read for all, and especially for those dealing with the yoke of oppression.

A really really great book with another story of Rosa Parks' activism, another side of back in the days white supremacy down south, a story of black feminism finally. Strongly advised

Thoroughly researched, well written history of the role of black women and their struggle for control of their bodies in the civil rights movement. A must for anyone interested in American history and society.