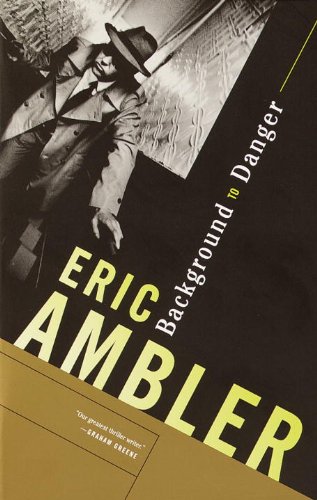 Kenton's career as a journalist depended on his facility with languages, his knowledge of European politics, and his quick judgment. Where his judgment sometimes failed him was in his personal life. When he finds himself on a train bound for Austria with insufficient funds after a bad night of gambling, he jumps at the chance to earn a fee to help a refugee smuggle securities across the border. He soon discovers that the documents he holds have a more than monetary value, and that European politics has more twists and turns than the most convoluted newspaper account.
View on Amazon
Though he has many imitators, no one strikes the balance between erudition and entertainment as Ambler does. His protagonists are generally smart but not especially thoughtful. They are men of action who often don’t even recognize themselves as such until circumstances force them to act. Ambler’s spy fiction from the 1930’s offers a fascinating vantage point on Europe’s descent into war and the raising of the Iron Curtain. Under the guise of an action-packed romp, Ambler gives us a front row seat to the scheming and chicanery that, in retrospect, so clearly signal the violence and oppression to come. Behind the lust for adventure so evident in this and other early Ambler novels sits a keen observer of world events. His motley cast of mercenaries, businessmen, secret agents and idealists spring vividly to life, and his descriptions of the capitals and byways of Central Europe have the authenticity of first-rate journalism.

This is probably my favorite Ambler novel so far (I've read 6), although it's not usually rated that highly by other readers or critics.

It's fast-moving, the naive protagonist (an Ambler hallmark), an intelligent political freelance journalist named Kenton, does something stupid in chapter One that lands him in the middle of the run-up to WWII, caught between Nazi spies and Soviet ones and having to rely on unexpected resourcefulness and some lucky encounters to escape a murder charge and sneak across borders. The Nazis are thoroughly despicable and well-characterized, with the nasty mastermind assassin Saridza under various names, and his sadistic English henchman, Capt Mailler (an inspiration perhaps for Ian Flaming's Red Grant).

Kenton's unexpected allies are the Soviet spies, brother and sister team Andreas and Tamara Zaleshoff, who speak English with Chicago accents (as a Chicago native, I found this very funny--Ambler has them talk like '30s gangsters), and their superior, the grotesque and brilliant polymath, Olga Smedoff, plus some red shirts killed along the way. (I wonder if the Zaleshoff siblings inspired Boris and Natasha, with a Mdme Big). Oh and the emaciated mute who was tortured by Czarists and is a Soviet as much from personal revenge as political faith. Even the minor characters are memorably sketched, with Kenton's journalist point of view providing a plausible foundation for some outre descriptions (e.g., Smedoff!).
There's plenty of low-violence suspense: two kidnappings, an interrupted torture session, a race against time escape as the air runs out and a James Bond-esque climatic car chase (Tamara is an ace driver). The plot is rather convoluted, although I never got lost (Ambler and Zaleshoff are always explaining things), with a satisfying denouement and much humor throughout.

Once again an "ordinary man" is thrust into extraordinary circumstances. In this case, a freelance newspaper writer (last name Kenton) becomes entangled in an espionage game in the period just before WWII. Kenton has suffered losses at cards and, broke, catches a train out of Germany to Austria, where he hopes to borrow money. A fellow traveler with a strange tale that Kenton doesn't believe asks Kenton to carry some papers across the border for him. Despite misgivings, Kenton is persuaded by a welcome cash payment to accommodate the man. True to form, the papers are photo images of military plans which, in the wrong hands, could cause great harm to the peace. Thus begins a story of murder, deceit, thrilling chases, and improbable escapes. Best of all, we see Kenton evaluating his various responses to these swiftly changing circumstances, finding in himself a courage and resourcefulness that surprises him and those he meets. In the end, he finds himself allied with Communists in opposition to Fascists, not for any political conviction, but because the Fascist faction seeks to do harm and the Communist faction seeks to prevent harm. This is an easy read about a likable character (actually several likable characters).

I'm am surprised I enjoyed this as much as I did! It's not the typical type of story I read. The mysteries I'm used to reading are far more "fluffy" than this. However, the characters in "Background to Danger" were so intriguing and - oddly enough, warm - that I found myself sucked into the characters as much as the mystery.

I've only given this four stars because, really, of my own personal tastes and lack of knowledge on the countries and foreign relationships the story deals with. I'm sure the book is worthy of 5 stars for anyone who knows more about this era, and is more used to this kind of mystery.

Being the squimish person that I am, I was very pleased that the book isn't very graphic. Yes, people get killed, but, happily, Ambler doesn't go into much detail.

I also appreciated the good guy/bad guy, somewhat blurred lines of right and wrong... the story presents interesting circumstances that place our protagonists in situations where what would appear to be "wrong" is, perhaps, actually "right." This said, the story focuses on the mystery and the "messages" aren't overly apparent and really just a subtext for those wishing to seek them.

This is a very interesting read and I'd be more than happy to read it again and partake of another Ambler adventure.

I generally like Eric Ambler but found this book more tedious than most of his. The ultimately complicated plot required several pages of dense exposition at the end; this was not only dry reading but it broke down the limited perspective and the desperate immediacy established in the earlier chapters. Almost seemed as though the author just grew tired of this tale and decided to wrap it all up as quickly as possible. Maybe his publisher gave him a deadline?

It's not one of Ambler's best but maybe it's me. There's much more action than most of his novels that I've read. There's too many surprises and getting out of impossible situations. And the names of the characters? So many characters with difficult names. Well, many it was me but I've read other Ambler books I enjoyed much more.

This is pre-WW2 Ambler and all the better for it. It has all the usual Ambler ingredients - railway journeys, psychopathic villains and a very unassuming hero. The conclusion is nicely low-key. The only drawback is that some of the dialogue develops into semi-lectures (interesting but scarcely believable in the circumstances).

Most enjoyable read I've had in a while and, in my opinion, much better than The Mask of Dimitrios. Starts with an introductory chapter that's straight out of Phillips Oppenheim via Sapper, but then settles in to more normal Ambler territory of the everyman responding as best he can to extraordinary situations. A credible and intelligent page-turner.

The accidental involvement in an international plot, brings out the heroism of an unintentional participant.
Rollicking adventure.

A neat thriller with some good twists. Certainly enjoyable enough to make me want to read more of Ambler's work.