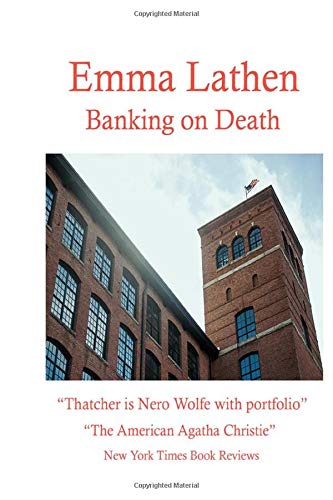 By: Emma Lathen and Deaver Brown

"EPub Edition 2. The Sloan receives a request for an advance against a trust that does not permit it. John Putnam Thatcher gets involved by one heir, Arthur Schneider, President of Schneider Manufacturing, and grandson of the founder who left a trust for his grandchildren upon the death of all of their parents. The last parent is about to die from natural causes. One heir is missing and Thatcher, Trinkam, and Nicholls, all Emma Lathen regulars work to find the missing heir. Soon they learn a murder is involved and it takes Thatcher to unravel the Not Gordon. Emma Lathen at her best."
View on Amazon
Have been a JP Thatcher fan for years and a devoted Kindle user since I first discovered them ... BUT as a retired English teacher and former newspaper editor, am really distressed by all of the errors found in these books. Will continue to purchase them, but wish I could make the corrections as I am reading so that I would have a corrected version when I choose to reread them.

I read the John Putnam Thatcher mysteries years ago, and even though they were written around the 70s, they are still highly readable and enjoyable today. This isn't the best one, but it is still good. The identity of the killer took me by surprise again. Lathen's combination of understanding human behavior, but at the same time looking at things logically, makes for satisfying reading.

This series was a new discovery for me, even though the books are long out of print. Emma Lathen is the clever nom de plume of a pair of authors, whose contributions to the whole are so well interlaced that I am unable to distinguish between the two voices. The book is a mystery in the form of the golden age classics. Well plotted, good characters, interesting sleuth, with many humorous and witty lines. I intend to read the whole series.

The book is well written, enjoyable, and tightly plotted. I am looking forward to aquainting myself with Mr. Thatcher's further adventurous investigations.

Being from Massachusetts, I loved the references to Boston and Framingham. Never guessed the perpetrator. Lots of interesting twists and solid characters.

I am a long - time Emma Lathen fan and had been waiting for years for Kindle versions to come out. But this new series is a strange one. The format looks as if it is a children's book. And the content is wrong. The title says "Bankng on Death", the first John Thatcher mystery, but the story in it is a totally different one. Its true title is "Come to Dust",

2017-06-13 I have been checking periodically and finally the book appears to contain the correct contents, or at least the sample does. The "Banking On Death" on my Kindle is about a college admission committee and its missing member; the sample I just looked at on the Amazon site contains the story about a Snyder family, which is the correct version.

My Aunt introduced me to her in the 1980s when I was looking for a new series. The protagonist is a SVP of banking at a giant NY bank back n the day when NYC controlled everything. John Thatcher gets roped in to save the investment of his bank. The causes seem obviously emotional but always come down to money. He sniffs it out with the help of his wonderful cronies, playboy but good banker Charles, straight laced Everett, young Nichols, and secretary Miss Corsa who keeps everything straight. His bosses the Pres and Chairman are busy being social and useless, but great fun. A much under rated series. When you find ne, let me know!

I enjoy these books but would enjoy them more if they had been proofread before being published. Simply doing OCR is not enough. Correct the many errors and reissue.