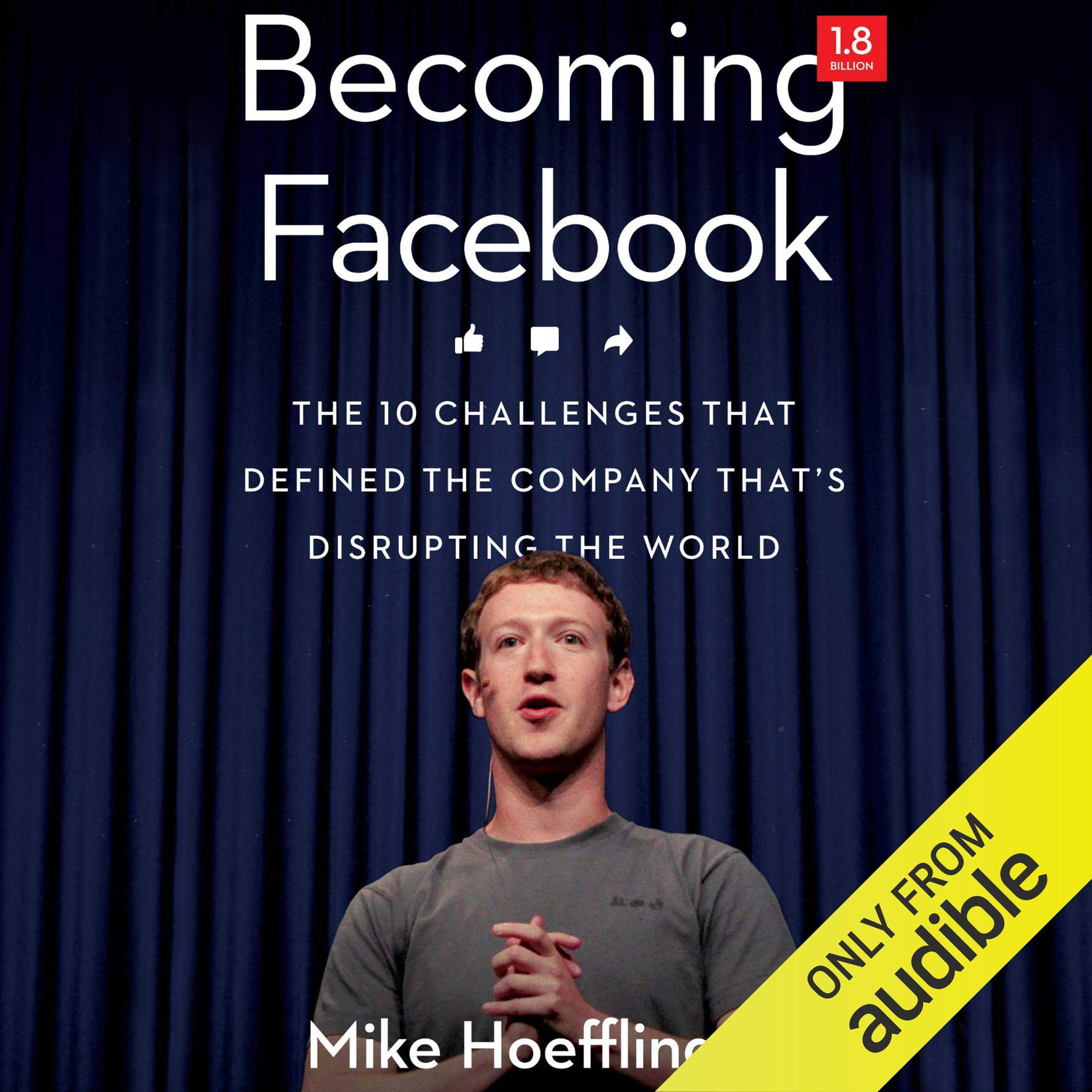 Becoming Facebook: The 10 Challenges That Defined the Company That's Disrupting the World

Facebook's founding is legend: In a Harvard dorm, wunderkind Mark Zuckerberg invented a new way to connect with friends...and the rest is history. But for the people who actually molded this great idea into a game-changing $300 billion company, the experience was far more tumultuous and uncertain than we might expect.

Mike Hoefflinger was one of those Facebook insiders. As a computer engineer turned marketing innovator who worked with COO Sheryl Sandberg, Hoefflinger had a front-row seat to the company's growing pains, stumbles, and reinventions.

Becoming Facebook tells the coming-of-age story of the now venerable giant. Filled with insights and anecdotes from crises averted and challenges solved, the book tracks the company's development, uncovering lessons learned on its way to greatness:

Intimate, fast paced, and deeply informative, Becoming Facebook shares the true story of how Zuckerberg joined the ranks of iconic CEOs like Steve Jobs, Larry Page, and Jeff Bezos - as Facebook grows up, overcomes setbacks, and works to connect the world.

View on Amazon
This book is pretty much required reading for anyone working or investing in a tech/mobile/online/media. I worked with the author at Facebook after working at Microsoft as well as several tech start-ups over a 20+ year career. "Becoming Facebook" does a masterful job distilling much of what I found interesting, powerful and broadly applicable from working at Facebook during that period. I've also read Accidental Empires and The Facebook Effect and am an avid business and tech book reader. BF is in the top 10% of the business books in terms of insight and applicable wisdom. It's also among the top very few business books in terms of readability as the author's humor, story telling and unabashed enthusiasm made it less dry than most of the serious business books I've read. In terms of Facebook books, BF is in a different category from Accid Empires, Chaos Monkeys and TFEffect in that it's not an insider tells all (CM), gossip rag like AE or history of a business book like TFEffect so you'll be disappointed if you're looking for fun facts about the famous people who worked at Facebook during Hoefflinger's time there.

If you want to hear the inside story on Facebook from a guy who's been around the Silicon Valley for a long time and worked for some of the biggest names, get this book. I particularly enjoyed the chapter "How Facebook beat Google." I don't know anything about marketing so it was always a mystery to me will why Google+ couldn't give Facebook a run for its money. This chapter explains in great detail how Facebook had already crossed an important threshold in terms of user adoption, which gave it significant advantages over Google+. The chapter goes on to discuss product differentiation requirements and so on. Cool stuff. Whether you're in a big company or a startup, this book this book will teach you a great deal about everything from product development to personalities to marketing and messaging.

Not just an instructive tale about one of our most interesting companies, but a GREAT how-to book for any aspiring businessperson. The author has gone to great lengths to weave the actual story of Facebook with business (and life) lessons learned. The "Thought Starter" that begins each Chapter is inspired!

Outstanding book about the coming of age of Facebook. Mike has a wonderful way with words. His insight from his time at Facebook makes the information and stories come to life.

If Facebook weren’t under a microscope over its vulnerabilities and poor decisions over privacy and connectivity, this would be a decent book. Unfortunately, the author wrote his foreword in October 2016.

It’s not even entertaining enough to get past this flaw.

A decade ago if I wanted to tell people about a good book I’d read, I’d write a review on Amazon and post a link to it on some forums I’m active on. Today, it never really occurred to post a review of Mike Hoefflinger terrific new book Becoming Facebook on Amazon. Sure I’ll eventually get around to posting this on Amazon but it’s pretty low priority. This says volumes about the importance of Facebook today, and also why this is an important book for people to read.

Mike is uniquely qualified to write this book. Bruce Schechter and I first meet Mike back in early 94, when he was talent computer chip designer at Intel. We were forming Intel’s first online marketing and Mike was already a web/internet fanatic. He taught us how the net worked, he made us read SnowCrash. and soon we spread out across Intel preaching the gospel. THE INTERNET CHANGES EVERYTHING YOU HAVE TO START WORKING ON THE INTERNET NOW!!!!!. Now, mind you this is one year before Amazon shipped its first book or any internet company you’ve ever heard of existed. The next year, Intel’s legendary CEO Andy Grove got the internet religion and our jobs got much easier. Shortly afterward Andy, picked Mike as his technical assistant because he knew more about the net than anybody in the company. In Jan 2009 joined Facebook as VP of global marketing working for COO Sheryl Sandberg, and closely with Mark Zuckerberg. As an engineer turned marketing exec, Mike is able to explain both how Facebook works as a platform and as a business. He is also a mighty fine writer and a good storyteller.
If you are doing business, you almost certainly should be advertising or at least experimenting with Facebook ads. Mike explains how advertising in Facebook works in a way which should help you make your FBs ads more effective. This is also a great book for entrepreneurs. Managing a hypergrowth environment, in the world most dynamic industry is embedded in Facebooks DNA. Each chapter leads off with a lesson, Facebook’s solution, and a question the entrepreneur should be asking. Finally, you should read this book if you want to get a behind the scene look at this thing that a billion of us spend an hour a day using, and get a glimpse of its future.

The book is divided into four parts. Setting the Scene, 10 challenges on the road to becoming Facebook, the Future, and Parting thoughts.

The heart of the book is the 10 challenges/chapters. Some like how Mark Zuckerberg turned down a billion offer from Yahoo when Facebook was an also-ran, are a perfect example of why we aren’t billionaires and Mark is. Others, like how Facebook grows are applicable to any business. Does everyone in the organization understand your mission, what your core product values are, and how you measure success?
Some of the most interesting chapters to me were the technology for making the Facebook application so fast in multiple dimensions. From the software and hardware behind making sure the Beyonce’s life stream isn’t lagging for millions, to making sure that my friends get to see popular pictures of my huge furry cats with no waiting. The process beyond continually enhanced the Facebook experience was also fascinating.
The biggest ah-ha moment for me in the book was understanding how Facebook advertising works. From the beginning, advertising has always been in conflict with the consumer. It doesn’t matter if its the annoying inserts in the Sunday paper, or the 10 minutes of ads in the last 5 minutes of the football games, pop-ups on the web, or the 15-second ads before a YouTube video. By having a keen understanding of what it is users like and dislike, Facebook is able to insert ads into a user's newsfeeds, that are at worse benign and in some cases actually perceived as valuable to the user. For example, I’m going be getting a new cell phone in a month or so, I expect FB to give me a lot of ads for cell phones, which is just fine. This turns out to be a win-win for consumers and advertisers. Those people who are concerned about the information tech companies have about you won’t be comforted by the chapters.

However, they may be comforted by the Facebook mission to connect all the people of the world and the obvious dedication and passion Zuckerburg has to make it happen. It is really remarkable the amount of money and management attention FB has devoted to trying to connect the poor of the world in India, Africa, and Asia. At some point the world’s poorest maybe profitable for FB, but that is likely to be decades away. It is a remarkable long-term vision, akin to Elon Musk’s goal of making humans a multi-planet species.

Interspersed throughout the chapters, Mike talks about the people behind of Facebook. This is the one area where I think the book fell short. Mike does an excellent job demonstrating that in no way is Mark Zuckerberg an accidental billionaire, as others have called him. Instead, he possesses a maturity well beyond his years, a rare insight into both people and products, and the courage of his convictions. But perhaps because Zuckerburg lacks the large than life personality of somebody like Steve Jobs (aka being a huge jerk), I didn’t really get a feel for what Zuckerberg is like. As for the rest of the Facebook staff, I appreciate that company is filled with a ton of certified (e.g. Ph.D.) smart folks who work really hard, but they ended up being interchangeable to me.

My favorite chapter was about the future. The Facebook of ten years from now, much less twenty years will be a radically different experience. The combination of Virtual Reality and augmented reality, along with artificial intelligence all combined with Facebook deep knowledge of our preferences, will not only pamper us when want to be but constantly challenge us to move outside of our bubble and experience different viewpoints and different experiences. I can hardly wait.

The penultimate chapter is something that would only happen in a book written by Silicon Valley insider in a place that celebrates failures. It is a laundry list of all the things Facebook has tried to do and failed miserably at. I loved it. Embracing failure is the most important piece of Silicon Valley DNA that rest of the world needs.

Becoming Facebook isn't a beach read, but it is a book that after you finish, you'll find yourself saying "wow I never knew that".

If you are looking for a book that reads like a story this is not it. I read about half the book. It is more technical about how facebook developed. There is no story it is fact after fact.

A must read with incredible insight and humor. The thought starters and lessons learned are helpful for anyone in any business and presented in an entertaining way. The story of Facebook during the seven years in this book is about humanity as much as anything else. The inside view of fostering relationships, making connections and the role of social media in our lives is very interesting.

I didn't expect to be thinking about navel gazing or bowling as they relate to business - love it!