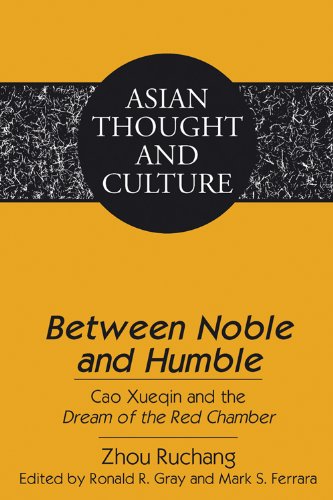 Between Noble and Humble: Cao Xueqin and the Dream of the Red Chamber (Asian Thought and Culture)

Between Noble and Humble: Cao Xueqin and the Dream of the Red Chamber (曹雪芹新传, literally New Biography of Cao Xueqin) is a translation of a scholarly work by the famous mainland Chinese critic Zhou Ruchang. Written for the Western reader, it historicizes the life and times of the Chinese novelist Cao Xueqin (c. 1715-1763) and comprehensively introduces the origins of the novel Dream of the Red Chamber (Honglou meng).
This translation is unique because it offers the first book-length biography of Cao Xueqin in English. Zhou carefully historicizes the decline of the once illustrious Cao clan, and he demonstrates how Cao Xueqin's own childhood experiences in a wealthy bondservant family during the Qing dynasty profoundly informed the encyclopedic narrative that he would later write. In Between Noble and Humble, Zhou also offers intriguing and controversial theories about Honglou meng based on decades of careful research, for instance, that the famous commentator Red Inkstone was in fact a female relative of Cao Xueqin.
View on Amazon
I have been reading and studying 'Dream of the Red Chamber' for about 20 years and it was a major part of my Master's thesis in graduate school. There is no doubt that Zhou Ruchang is one of the most important "Redologists" in the history of "Dream," but this book (and others I have read of his in Chinese) was very disappointing. I have no doubt that he does his research and claimed for this book that he reviewed thousands of documents. Basically, it's a "biography" of the author of "Dream," Cao Xueqin. However, while the historical and background information about the decline of the Cao family, their relationship with the Kangxi emperor, their treatment under the Yongzheng emperor, etc. were very interesting, it felt to me (based on vast amounts of other research) that the majority of his story of Cao Xueqin's life is just that ... a story, in Zhou's imagination. For such a reputable scholar, he should have made clear what were verified facts (with citations or more information about how he verified said information) versus what he "supposed" or "imagined" Cao Xueqin was doing or where he was at a given time. I was glad to see quite a bit of the Dun Cheng/Dun Min poems, which accounts for much of the little direct information we have about the author's life, but his interpretations, to me, were not particularly accurate. Of course, one of his whackiest theories, which he expounds on in this book, is that 'Red Inkstone' was actually a woman, and she was the woman that the character of Shi Xiang-yun in the novel was based upon. Nearly every other Redologist agrees that this theory is absolutely insane, and Zhou knew that as well, yet didn't provide any real evidence, just some "interpretations" of points in the text that he thinks were hints about the true identity of 'Red Inkstone,' but clearly are just in his imagination. In conclusion, while Zhou Ruchang was a giant of "Redology" in his day, there are many other and far better Redologists to read and learn from and he should not be one of them.