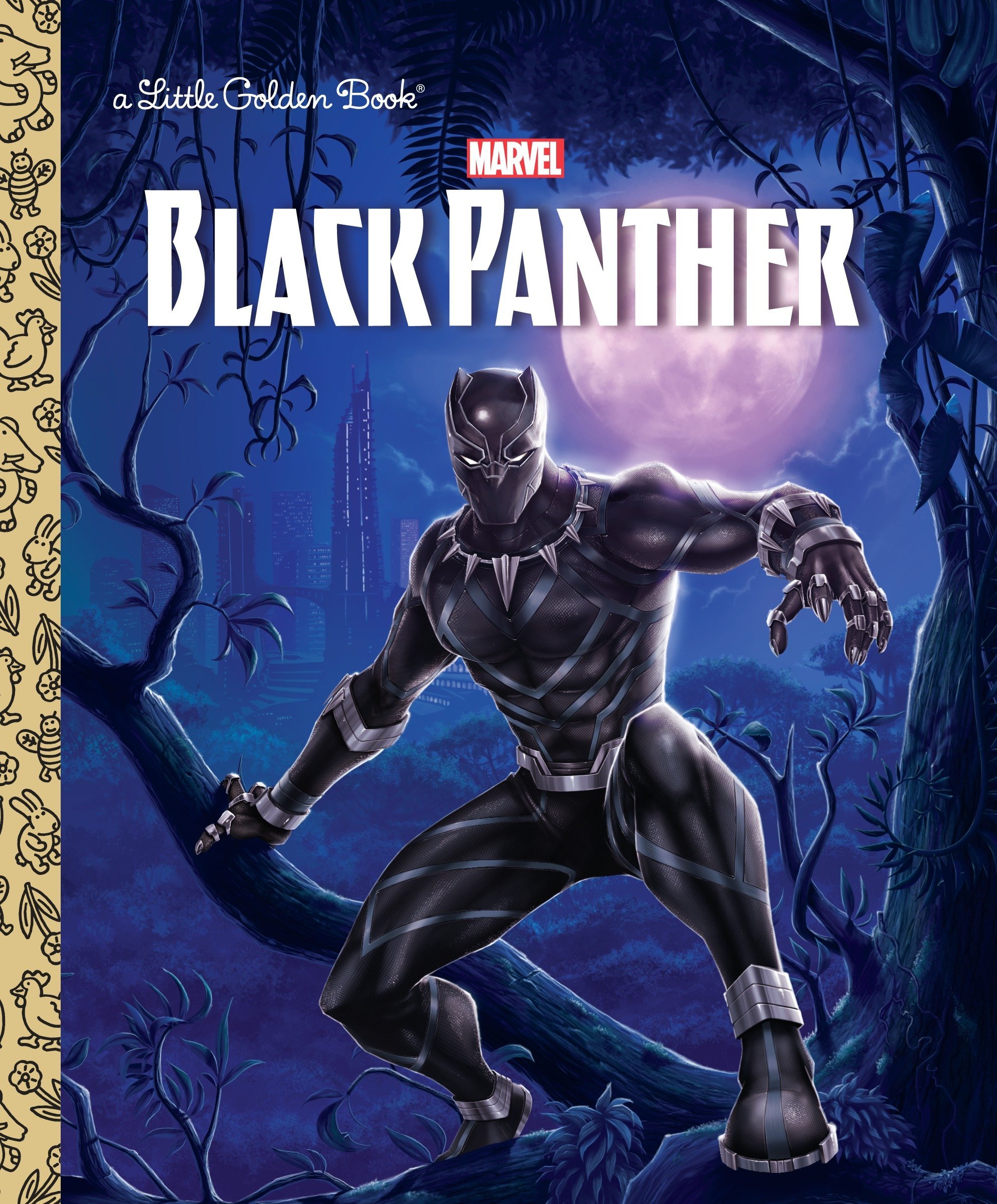 By: Frank Berrios and Patrick Spaziante

Meet Marvel's Black Panther! As an Avenger, this Super Hero uses his strength, speed, and unbreakable claws to pounce evil-doers! Boys and girls ages 2-5 will love this action-packed Little Golden Book as they learn about the Black Panther--from his Wakandan origins to his powers as well as his friends and foes.
View on Amazon
Cute book, however - As previous reviewer stated, there are no images of the Black Panther without his mask. I was very disappointed as I hoped to show my child that superheroes come in all colors.

I was so excited to get this book for my son, he loves Black Panther and always asks to rent the movie. The book arrived about a week ago and we finally sat down to read it tonight. Imagine my shock when I realized that there isn't a single illustration in the book that T'Challa out of the Black Panther suit. All of the other superhero Golden Books introduce the hero and show them in their regular appearance at least once. Captain America introduces him as Steve Rogers who loves America. Iron Man introduces him as Tony Stark who loves to invent. Even Hulk introduces him as the scientist Bruce Banner who got accidentally bombarded with gamma rays. In each of these books you see the hero in his day to day appearance, but all of those heroes look like my son with light skin. It is important for kids to see and understand that people who don't look like they do are good people and can be superheroes. I can't even imagine how disappointing it would be for a little kid of African heritage to open this book and find that you never see in the pictures that Black Panther has dark skin like he does. Otherwise it was a typical Golden Book, fun story, action scenes, but come on we can do better.

The text and pictures are pretty good, and I was excited to share this with my son. I was surprised that there are no pictures of Black Panther without his mask on. This book which is ostensibly about a black superhero shows only black villians, and covers the face of it's hero.

We get to see Peter Parker without his mask on two pages of the Spiderman golden book, yet somehow we never see T'Challa as King of Wakanda. Was excited to introduce my son to some diversity here, but I guess not. I would say this is just an oversight, but three of the pages here also include other avengers, and there are mostly all represented (I mean even Ant Man and Wasp are there), but no Falcon/Sam Wilson. So, I dunno. Seems like a missed opportunity

Good book, but don’t like how they called Black Panther a Chief.” He’s the KING of Wakanda.... Go ahead and say it Little Golden Book! KING!

If you are trying to show your child that all superheroes aren't white, this one doesn't do it. He isn't shown at all without his mask.

Every single super hero golden book shows the hero without the mask except this one. What's different about this one: Black Panther is a black man. Not once have I ever been upset or disappointed with a golden book until this one. the publisher should be ashamed

This is a nice book for preschoolers who love super heroes and Black Panther in particular. Since he is obviously too small for the movie, we have used the Little Golden Books for a good age-appropriate way to learn about the super heroes he likes. The Thor one is a favorite in our house. This one is good and is still very age appropriate. My only complaint is what others have said, why no pictures of Black Panther outside of his costume? I think seeing the secret identity is a big part of super heroes for kids. Since my son is bi-racial, we were excited to have a super hero that is a person of color too. Since we never see him out of the costume, that whole element is lost in this book. BUT, my 3 year old LOOOOOOOOOOVES it, so that is good!

ugh, how did I miss all the reviews that would've warned me that you never once see T'Challa without his mask? The only Black characters shown are either villains or background people who need rescuing (yet somehow Cap gets two full pages) and there are exactly *two* females depicted in the entire book besides Black Widow and a nearly unnoticeable Wasp. I'm disappointed and no longer eager to share this with my kiddo.

Bought this for my son thinking it was similar to the treasure cove stories as he has a few and they are lovely quality and very good value. However when it arrived realised it was of course ‘little golden book’ and the quality is absolutely awful the cover is pretty much thick card with pages between. The story itself is fine however the actual boom quality is appalling. Will definately be sticking to treasure cove brand from now on.

Great addition to the kids collection