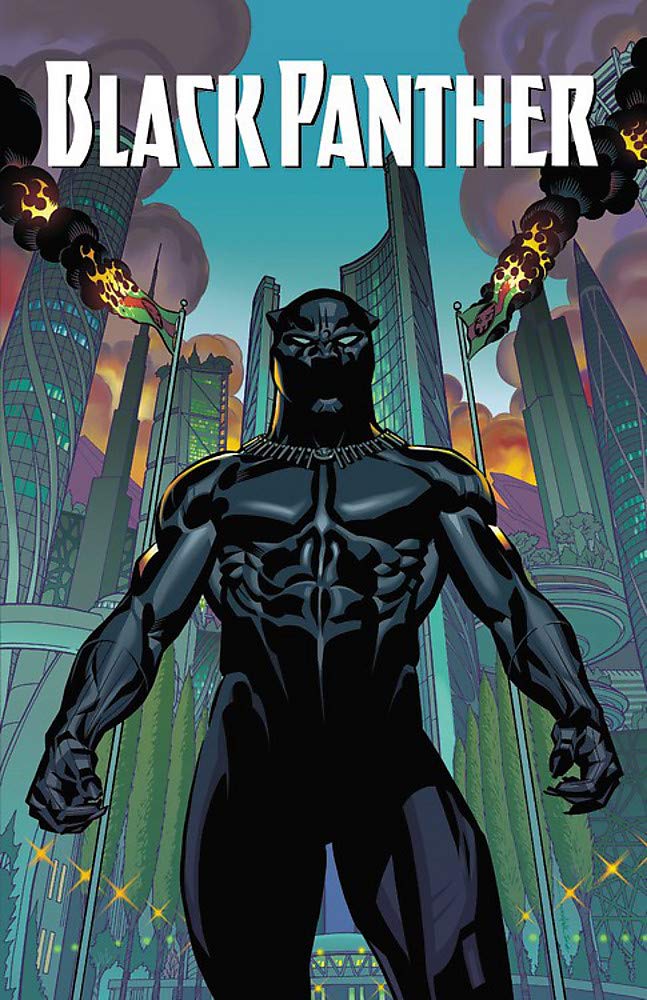 Black Panther: A Nation Under Our Feet Book 1

By: Brian Stelfreeze and Ta-Nehisi Coates

A new era begins for the Black Panther! MacArthur Genius and National Book Award-winning writer T-Nehisi Coates (BETWEEN THE WORLD AND ME) takes the helm, confronting T'Challa with a dramatic upheaval in Wakanda that will make leading the African nation tougher than ever before. When a superhuman terrorist group that calls itself The People sparks a violent uprising, the land famed for its incredible technology and proud warrior traditions will be thrown into turmoil. If Wakanda is to survive, it must adapt--but can its monarch, one in a long line of Black Panthers, survive the necessary change? Heavy lies the head that wears the cowl!

COLLECTING: Black Panther 1-4, Fantastic Four (1961) 52
View on Amazon
With the new Black Panther movie looking astonishingly good from its trailers, a timely Amazon sale sent some of the recent comics starring the King of Wakanda tumbling my way.
Well, I suppose from 2016, so not the most recent - but the run by Ta-Nehisi Coates has been raved about by fellow fans of T'Challa so it was about time I took a look.
I've long been a fan of Black Panther - I tend to gravitate towards heroes who aren't mighty gods or universe-menacing Phoenixes - and so the combination of genius scientist and stealthy warrior has long appealed.
I'll confess, though, that I'm awfully glad that I bought book two at the same time as book one. Coates takes his time to find his feet with his story - or rather, more to the point, he has a big story to tell but sometimes in volume one rushes through the actual telling, and you end up piecing a couple of the parts of the tale together in your head rather than reading it on the page. He's much more in his stride by the second volume, so if you find yourself put off a little by the opening collection, stick with it, it comes together much better as the issues go by.
The story itself tackles the tale of Black Panther as king, fighting to hold together his kingdom from threats within and without. He isn't all-seeing or all-wise, rather he's a man underneath the legend, making political choices that might not always be for the best, but are mostly made with the best intentions.
The tale tackles issues of nationalism, identity, monarchism and democracy - weighty matters that go beyond the usual supervillain hokum of many comics. Sometimes, that strays into territory of infodumping, but as I say, the method of telling the story keeps improving.
I'm not terribly sure it will serve as a great introduction to readers for the Black Panther movie - but it's a powerful look at the world the comics character inhabits - with a wider landscape than his stories are often afforded.

In the long history of the Black Panther there have only been two authors up to the task of leading this comic. First was Reginald Hudlin. The other Ta-Nehisi Coates. Both were able to handle the Panther character and treat it with the respect and realism it deserved.

A Nation Under Our Feet was when Coates took over the franchise and threw everything on its head. Wakanda is always portrayed as a nation on a hill with its wealth and culture largely untouched. That was eventually beaten down with huge wars with Dr. Doom, Namor and then Thanos. This volume starts in that aftermath and everything has come apart.

Shuri, the Black Panther is lost in a limbo. The chiefs in the periphery are ignoring the central government and running things on their own, some to the detriment of their people. In neighboring Niganda two spiritualists are stoking a revolution against the crown. Two Dora Milaje leave the order and attempt to create their own country based upon protecting women and children. T’Challa has returned and most not only deal with these fires but rule and renew the nation.

That is the big question posed in this volume, how should T’Challa rule as king. Does he resort only to force? Does he try to turn to the people and provide them with a new image of the nation to inspire them? This is what Coates series is about what is the nature of governance, and is the reason why his stewardship of the Panther franchise stood out.

The artwork is top notch and there's plenty of extras at the back including alternative covers and the old Fantastic Four issue where T'Challa made his first appearance.

I read through a bunch of reviews of this book that didn't think to highly of it. Admittedly, it isn't as action filled as other superhero comics, but those are a dime a dozen. I'm glad that this book ended up being something different because it takes a chance on appealing to a different audience and I think it works wonderfully.

First off, this book opens with the Black Panther returning to a broken Wakanda. It's not literally broken; instead it is broken in spirit. The people have lost faith in their leader after several incursions from outside forces. Various warlords are seeking to take control of different parts of the nation and the common people are cracking. How can this nation be brought whole again and what will the Black Panther's role be in it?

I've never read a Black Panther story before so I didn't really have any expectations on what this book would be. This gives a good history of Wakanda and the Black Panther, and I enjoyed the political aspects of it as well. There are a couple of outlaws that are working to help the people without actively acting against the country's leadership (so far). I liked the characters despite not being familiar with most of them beforehand.

The art is fantastic. There are some really gorgeous sections. I could easily see this being the favorite part of many readers. There are some sections of the book that are kind of dry. This volume aims to set the scene for the hero in many ways and prep for future events. I think it succeeds and I am looking forward to reading the next volume.

This reprints the first four issues of the current Black Panther series plus it includes a reprint of the Fantastic Four issue that was the first appearance of the character.
Something for both new fans and old timers like me.

Ta-nehisi Coates crafts a brilliant comic in his first turn as writer for Black Panther. The tale addresses tradition, power dynamics, and oppression in a way that brings life and current themes into the comic that I look forward to seeing on the silver screen. Volume 1 sets up a conflict between two nations, a system of oppression between two peoples, and the legacy of the kingdom. I look forward to reading Volume 2.

The first part of a new series. I read following the film. Its good if a bit talky at least it questions monarchy. Something the film was relatively blind to.

This is everything good. Talk about collector's item. I keep buying them as little gifts. Always a hit.