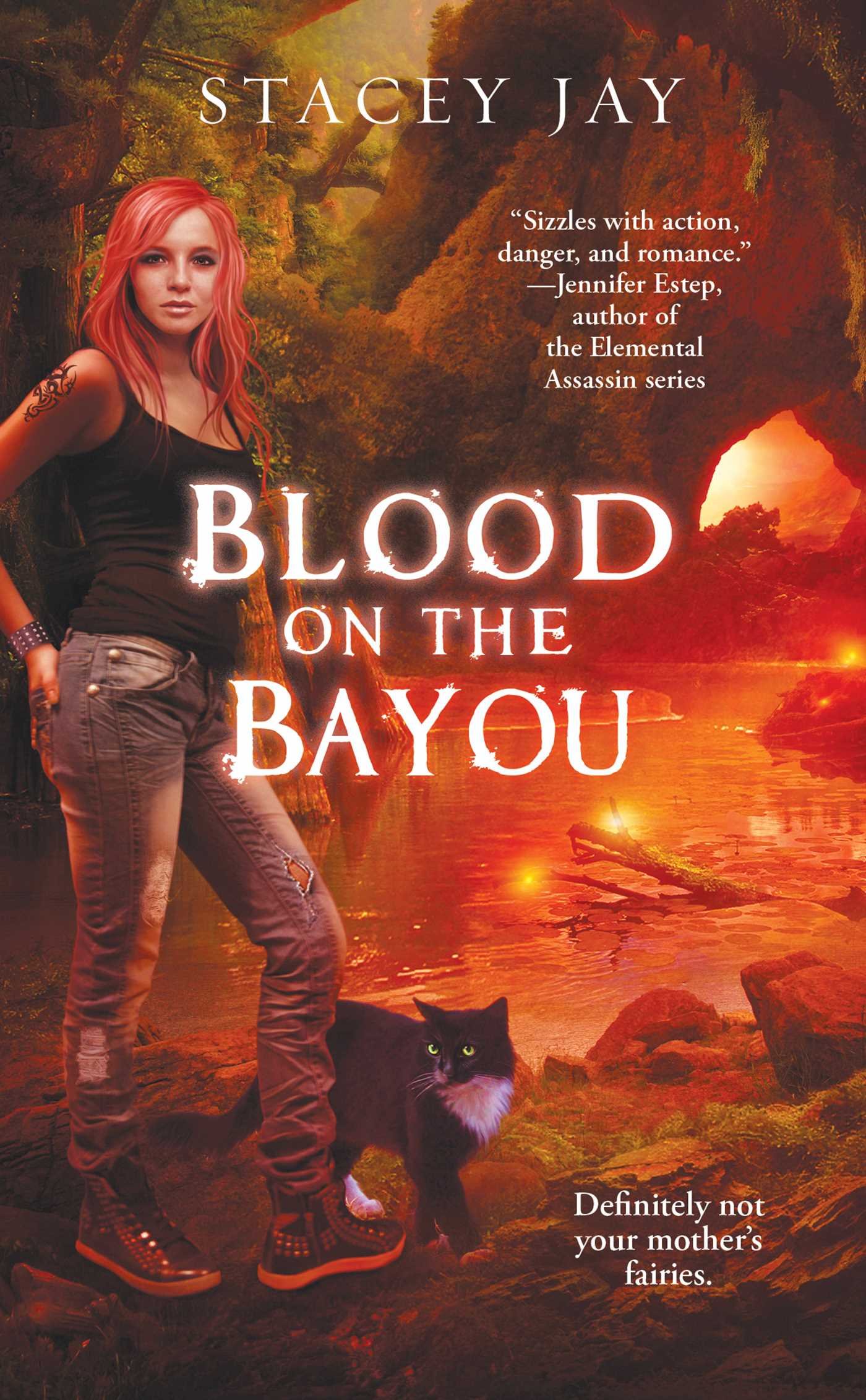 The second book in a new urban fantasy series featuring mosquito-sized fairies with poisonous bites that drive humans insane.
View on Amazon
I wasn't completely sold on Annabelle in Dead on the Delta, but this book has changed that! Annabelle was much more nuanced and self-actualized here than she was previously. She was kicking ass through the whole book. I really enjoyed the mystery and some of the closure aspects that were presented. I didn't enjoy the way the book ended, especially if Stacey Jaye won't be writing another. I have to know what happens to Gimpy!

Annabelle & Hitch - I liked that she finalized things with Hitch and told him what really happened before they broke up. I'm glad that he realized he was a d-bag and even better, that Annabelle realized he should have given her the benefit of the doubt before jumping to conclusions. Sharing the guilt FTW! She realizes that she could still love him and their time together without being in love with him. It was a good conclusion to their situation.

Annabelle & Cane - I like Annabelle and Cane together, but I feel like their futures just don't match up. They are each very hard-headed but, even though they care for each other, I think it is time to throw in the towel and find more compatible partners. Such as...

Annabelle & Tucker - I liked that we found out so much more about Tucker in this book. He was my favorite of the three guys and I think him and Annabelle are good together. SPOILER!!! I didn't like the ending where it was insinuated that she was cheating on Cane with Tucker though. Annabelle never seemed like she would do that intentionally. Yeah, she slipped a few times by kissing Hitch but it was always in the moment. This seemed planned and continuous. It actually made me not like her and Tucker as much. I would hope she would respect Cane enough to let him go. /SPOILER

As I previously mentioned, the mystery this time around was very good and it involved a lot of the major players in Louisiana. I liked how twisty it was; you were left guessing the whole time.

The ending of this novel is particularly painful because so many loose threads are being dangled around for future books, but we might not get those books. Things like how the fairies really came to be, what the Gentry are, why Annabelle can talk to the fairies, what she and Tucker are going to do after leaving Donaldson... it's all left open. I really hope that there is another book in this series. Based on my feelings between the first book and this one, I expect that it would be the best in the series. Please Pocket Books, let us have another Annabelle Lee book!

Fairies became human blood seekers biting mortals. The Fey toxin leaves 75% of the humans insane; 10% physically misshapen before dying; and another 10% instantly dead; the remaining populace contains immunity. Katrina exacerbated the fairies assault for those living on the Delta (see Dead on the Delta).

Immune to the toxin, Fairy Control and Containment evidence collector Annabelle Lee works the bayou beat. Her former lover Hitch asks for her help in finding stolen Fey toxin, a secret lab using human guinea pigs and an FBI traitor. Annabelle hesitantly agrees to assist him though she fears a meltdown as she still loves Hitch. Complicating her life further is she must deal with her attraction to the mysterious Tucker, who has his paranormal skills like invisibility, his elixir and his lethal warning.

The latest Annabelle Bayou fantasy is an interesting thriller starring a kick butt heroine with issues mostly caused by the three males (including a current BF) competing for the title of "Master of Her Vagina". Filled with action, the storyline is thin yet fans will enjoy trekking the swamps guided by an energetic irreverent protagonist.

The first book made a great start, introduced a lot of suspense, none of which are satisfactorily resolved in the second book. The story has gotten very complicated in a rambling way. Anabelle Lee is now involved with not one but two and possibly three men. She has adopted not just a cat but a little girl. The fairies have been joined by the pixies. Her friends have become enemies from the CIA, FBI, FCC... Gay and straight friends, in love but not in love, magic and no magic, dead or alive, nobody is what they seem. The book also has more mistakes and may not have received as much critical editing before publication. Nevertheless, the author is a wonderful story teller. The characters as real and the story has a natural feel with a lot of suspense. Nothing is ever expected or expectable. Despite the rambling, it is still a good read.

This was a quick read that kept my interest. The growth of the characters progresses nicely while still leaving room for more development. My biggest complaint, all of the unfinished business. There are so many questions that aren’t resolved.
Does Gimpy survive? Where’s Tucker? Do the fairies kill the Big Man? Does the truce happen? What about the pixies? How involved in the FBI lab is Stefanie?
I would have rated higher, but considering this book was written over 5 years ago, I doubt these questions will ever be answered. Such a disservice to the readers.

The saga of Annabelle Lee and her life on the Fairy infested bayou continues in Stacy Jay's "Blood on the Bayou".

Packed with danger, mystery, romance, and a cat that eats weird things, the sequel to "Dead on the Delta" does not disappoint.
Beginning the day after the previous book ends, BotB takes us deeper into the bayou, deeper into the realms of the "invisible people" and into Annabelle's life and mind.

This was one of those books that I didn't want to put down and I didn't want to end, Stacy Jay does an amazing job of blending suspense humor and romance, her characters are vibrant and human, even the secondary characters have personality and substance, so much so that at times I found myself wanting to know more about their stories as well as Annabelle's.

If you like paranormal romance and urban fantasy you owe it to yourself to read this series.

This is tight, compelling, and hauls you along at a brisk pace, although there's a fair degree of introspection at times - it's needed and necessary to plot development, but it did get a touch repetitive. Which, in reality it would I suppose - big issues do tend to rattle around ones' head in a circular way...

There's some politics coming in, but not in an overpowering way, a massive betrayal (or is it?) by someone she trusts, some more of the "big man" who surprised me by being a red head - I'd read him as black,not sure why - quite a lot more of Tucker, some new fey - oh and the Gimp's snarly attitude and odd behaviour are finally explained - altho' I had an ah-ha moment about two thirds of the way through, which proved right!

I have to say I don't like her morals - says me sounding all Outraged of Tonbridge Wells! What she's doing at the end is, by my book, plain old fashioned cheating. Cheating and lying. I was disappointed in her!

Her drinking continues and isn't presented in a rosy light - the image of her staggering around upending a whiskey bottle to drain the dregs isn't pretty, and it almost has disastrous consequences. She says, (don't all alcoholics?) that she's cutting down, and by the end, she certainly has a strong inducement to appear sober.

Chapters 7 thro' 9 are seminal. Her tangled relationships and feelings for the various men in her life are challenged, leading to a brilliantly written, creepy section with the Junkyard Kings, which leads not only to some stark realisations about the rather rosy assumptions she's made about her hometown, but also to a pivotal and painful moment where she finally takes a shaky step away from some of those tangles.

This book follows on from Dead on the Delta, the first in this series, and I have been eagerly awaiting it to find out what Annabelle gets up to next, and I was not disappointed! Some authors just have a knack of telling a good story and make you want to keep turning the page, and that's what I've found with Stacey Jay - you've got the conflict of wanting to find out what happens next, but not wanting to finish the book!
Sometimes it feels like the paranormal genre has got a bit lazy with the success of certain books out there (you know which ones!), and don't get me wrong, I love a good vampire book as much as the next girl, but I also love finding something a bit different, where the characters and "species" aren't totally predictable. Combined with the story-telling skills, this makes this series unmissable, and am desperately hoping for book number 3!

I read this immediately after Dead on the Delta, the first in the series. Enjoyed them both. The first had an excellently characterised alcoholic denial. This second resolves some(not all) of those issues. This book has a lot too much political FBI/CIA shenanigans for my taste, and introduces a 3rd (!!!) love interest, but is still a very enjoyable read.

Annabelle continues to be an engaging main character, still trying to dodge responsibility, but accepting it eventually. One love interest is retiring, which is good, because he's rather irritating. The fairy situation increases in complexity, and Gimpy the cat continues to steal the show, when he is (rarely) on screen.

Had the first book Dead On The Delta on my wish list for some time and now wished I hadn't waited! Read the first book and bought the second straight afterwards. If you are a fan of Kate Daniels or Charlie Madigan then you'll love Annabelle Lee. The author manages to do what so many others failed at and that is to create a heroine with real personal issues who doesn't come across as whiny or irritating. Eagerly waiting for the next book.