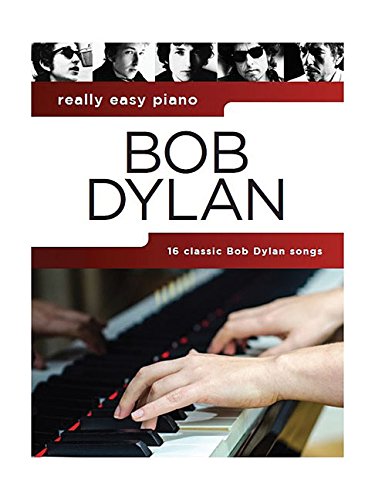 (Really Easy Piano). This volume features 16 Bob Dylan classics, including: Mr. Tambourine Man * Make You Feel My Love * All Along the Watchtower * Blowin' in the Wind * Knockin' on Heaven's Door * The Times They Are A-Changin' * and more. The songs in this collection have been specially arranged for really easy piano with chords and lyrics. Each song includes background notes as well as handy hints and tips to help you improve your performance.
View on Amazon
Easy to read print, and great for early piano players.

Four stars for moment. Up date now below
Looks OK but the first song I went to play Lay Lady Lay is in the wrong key being C major the Dylan original version is in B minor I have needed to edit all the written music to the correct key.
The C Major version does not sound right at all.
I am hoping this is the only song scored in the incorrect Key .
Further to the above I have now discovered a Byrds cover was released in C major in playing along with the byrds track in C major the song does sound right , however I wish the score was written in the original Dylan key

Well presented, easy to pick up but then again he’s my hero....Forever Young

The book looks great and was a good price. It’s easy piano...but not sure about the “really” easy part. My husband is going to need quite a few lessons before playing this! All in all...smooth transaction. Next time I’ll have to specify to drop it off at the house...because it was an inconvenience having to go to the post office.