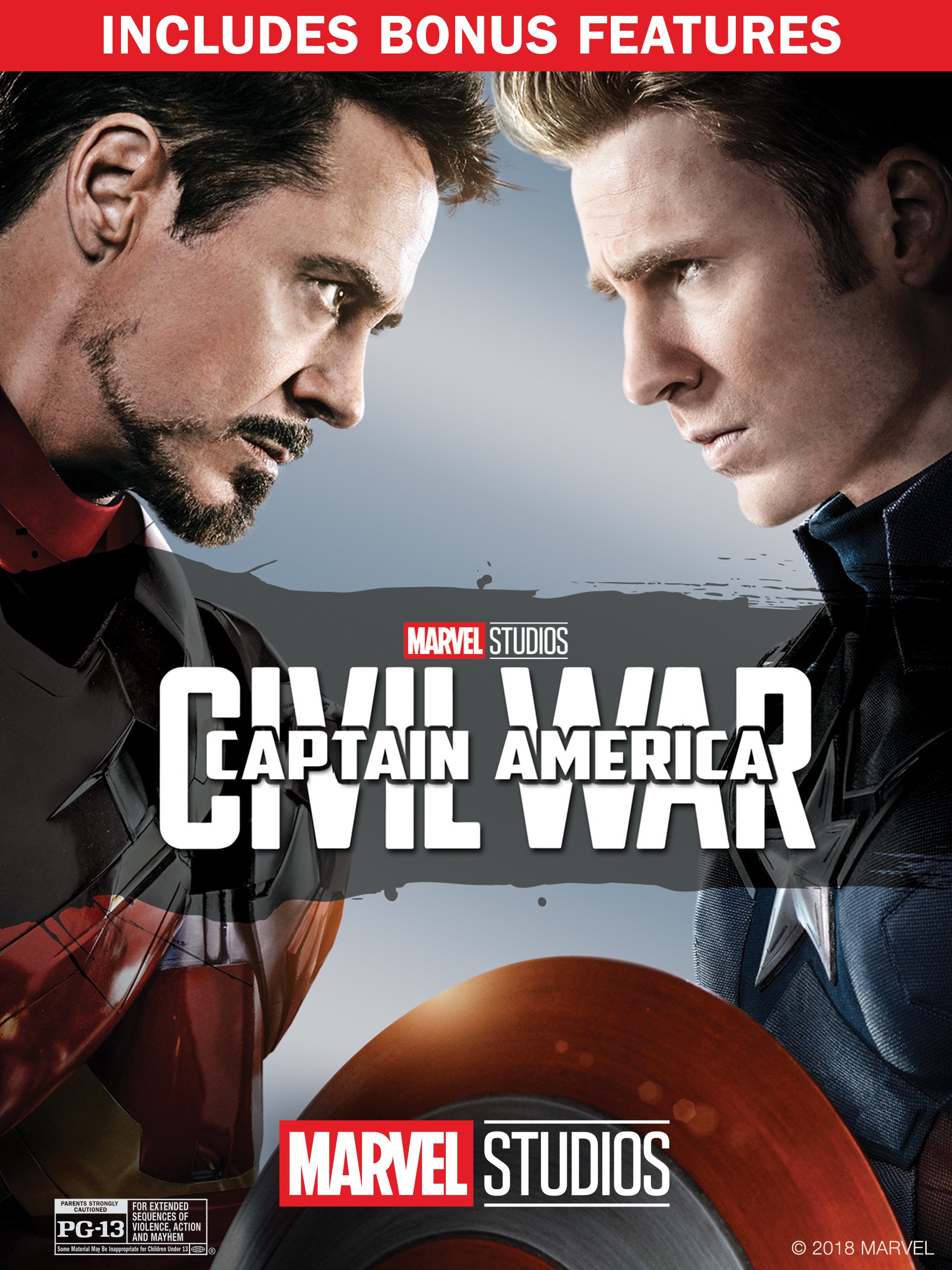 View on Amazon
I’ve long believed that Captain America has provided some of the very best movies to emerge from the Marvel Cinematic Universe, and that trend continues with “Captain America: Civil War.”

Based on a series than ran in the comic books a decade or so ago, “Civil War” features Cap and the rest of the Avengers (at least the characters that appear in this movie) being held to account by the governments of the world for the collateral damage they inflict while going about their business of defeating supervillians like Loki and evil organizations like Hydra. A compromise is worked out; the Avengers can stay in business if they agree to end their independence and submit to taking orders from a U.N. organization. Half the team, led by a slightly conscience-stricken Tony Stark, are amenable to the idea. The other half, led by a wary Captain America, want nothing to do with diplomats and politicians. Add in a bad-guy with an agenda of his own, and the result is an action-packed but also character-driven superhero movie that rises above the pack of this genre.

While clearly sympathetic to Cap’s point of view (the title is, after all, Captain America: Civil War) the filmmakers (and Robert Downey) do not allow the pro-control Avengers to turn into cardboard sell-outs. They also do an exemplary job of choreographing the action and integrating characters into the storyline, including the Black Panther and a few surprises. Virtually every major character has a good moment or scene or two, which isn’t always the case with these multi-character movies, where it can seem the director is less of a storyteller than a traffic cop.

The film’s action set-piece, a show down between the two sides at a German airport where, old friendships aside, no punches are pulled, is extremely well done. Unlike some other directors who seem to set these sequences in darkest nights with rain pouring down, obscuring everything, like a van Gogh painted in a thunderstorm, Christopher Markus and Stephen McFeely shoot their epic fight in broad daylight. They pay attention to detail and excel at showing how, even in combat, the action is driven by the individual characters making individual decisions, instead of the typical guys-dressing-up-in-tin-cans-and-knocking-each-other-down fight scenes in comic book movies. The filmmakers also add several plot twists and turns, and at a few key moments upend expectations.

This DVD package includes very few features, which is fine with me, I hardly ever watch them.

Captain America's Civil War is a blast of a Marvel movie, though like many recent Marvel offerings it is dragged down a bit by the Marvel formula. After the events of Captain America: The Winter Soldier the world is hunting Bucky Barnes (the Winter Soldier). With the added problems of the devastation caused during Avengers: Age of Ultron and collateral damaged that occurs in the opening of this film, the world governments come together to demand a new level of oversight over the Avengers. Iron Man wants to acquiesce to these demands due to his part in creating Ultron; Captain America wants to refuse as he feels government organizations are too easily corrupted after learning Hydra had been infiltrating SHIELD for years. Honestly, this movie is really Avengers 2.5 rather than a Captain America sequel. It does do a great job of continuing Steve Rogers' story and tying things together nicely around his friendship with Bucky, but enough of the other characters get their own arcs that it feels like a group movie.

There are also solid introductions to both Spider-Man and Black Panther (though the former's inclusion is a bit questionable since Tony Stark drafts him into the growing superhero war). The movie's much hyped airport fight scene between the two "sides" of this conflict is bombastic and awesome. The main drawback is just that the movie does pull a few punches and there are no fatalities like in the original comic. The stakes thus don't feel high enough. The climax of the movie is more personal and emotional which is a nice change from other Marvel movies going over the top with the "world ending" action. The real downside though is the villain. Daniel Bruhl is solid and intriguing as Helmut Zemo, but his "plan" in the movie relies on way too many conveniences and coincidences to make sense. If you can turn your brain off for the movie, you won't really care, but the moment you start to think about how Zemo had to perfectly predict the reactions and motivations of numerous characters it breaks the immersion of the film. Honestly, you just could drop Zemo entirely and the film would have worked well enough without him.

As the countdown to "Avengers: Endgame" runs down, it's worth a look back at "Captain America: Civil War", which set the stage for the last two Avengers movies. The Avengers, the world's greatest heroes, have vanquished every foe, until now. A series of unfortunate events leads to a house divided, and a house divided cannot stand. The Avengers will pick sides, and the consequences will be catastrophic for the team. Above all, Captain America will find out who his friends really are...

"Civil War" is a well-crafted action movie. Chris Evans is outstanding as Steve Rodgers/Captain America, even if our hero has to compete with Robert Downey Jr/Tony Starks/Ironman for screen time in his own movie. There's lots of storyline to unravel, excellent CGI effects, and plenty of character development for a huge supporting cast. Well recommended to fans of the MCU.

Great movie and excellent picture and sound.
Doesn't quite live up to Captain America: Winter Solider but still deserves a place in your collection.