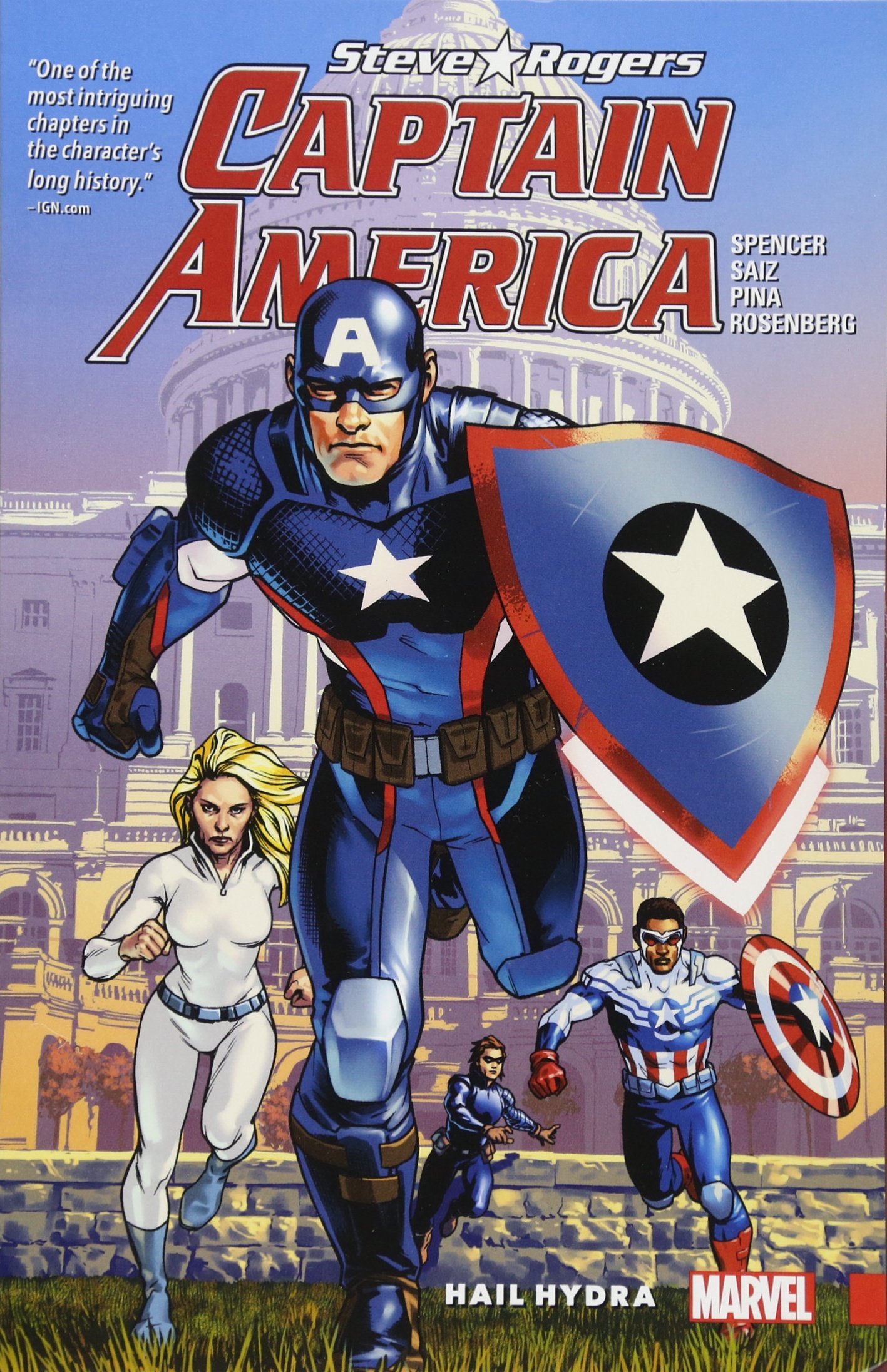 By: Jesus Saiz and Nick Spencer

He's back! The original Sentinel of Liberty returns, with a new shield, a new team, and a new mission! And he's not the only one who's back! Like the saying goes-- cut off one head, two more will take its place! HAIL HYDRA!

COLLECTING: Captain America: Steve Rogers 1-6, Free Comic Book Day 2016 (Captain America) 1
View on Amazon
When I read the last page of the first issue of this book, I was shocked! Captain America, one of the greatest heroes of all time, is pledging his allegiance to Hydra. I could not believe this!

Nick Spencer wants to twist things up by changing everything we knew about the beloved Sentinel of Liberty. Since the events of Avengers: STANDOFF, not only Steve Rogers got his youth back, but his memories have been after altered, believing that he has been an agent of Hydra this whole time. As Steve continues to pledge his allegiance to the Red Skull, he's secretly planning on killing him.

Meanwhile, everyone is busy with their own things such as Sharon Carter convincing the government to approve the SHIELD Act, Maria Hill getting ready for her trial and Iron Man and Captain Marvel are at each other throats over an inhuman's ability to see the future after the deaths of a founding Avenger and a someone dear to them. And here, I'm wondering how long will it take anyone to realize that there's something different about Steve.

I like how this book ties in with Civil War II. It was cruel to see how Hydra Steve Rogers tests out the Inhuman's ability by giving him something to have a vision about. Plus, he deliberately pushes Tony's buttons by bringing up his drinking. I don't know why Nick Spencer is doing this but this is a must-read for Captain America fans!

Marvel had a good tradition to make you feel you could relate to the characters. This comic gets that again... there is a lot of violence in these pages and the despair drawing the people into the refuge of dangerous ideas.
Captain America is not the Captain America we have known from ever, he has awoken to the memory of a time that could be, or not, real. But still he is the same good man following ideas that could be wrong in difficult times, In this new version Captain America's loyalty always was with the enemies and their ideology (Hydra is not nazi, the nazis existed in the Marvel universe too). The fact that the story elicited polemic beyond the comic world into newspapers is a testament of the strength of the comic. The story show us a present were Steve Rogers has to sacrifice himself and ascend to power using a formidable strategy; at the same time his new biography unfolds. There is also a glimpse of the forgotten ones that fallen in vast crowds into Hydra. I think this is classic Marvel.

Though the story is bold and innovative in ways, the writers nonetheless sell the readers short with "pull in case of emergency" plot devices that can reset the story if comics aren't selling. It's an interesting concept for Captain America, but I wish the writers would have been courageous enough to see their vision through without needlessly hovering over a reset buttin in the form of a mcguffin.

I enjoyed the art for the most part, especially the different take on Cap's uniform.

Following the events at Pleasant Hill, as depicted in Avengers: Standoff, Steve Rogers has been de-aged and made fighting fit once again by the sentient cosmic cube, Kobik. The Sentinel of Liberty is back! The original Captain America wields the shield (well, a shield) once more!

Oh. Hey. Did I mention there's a catch?

When issue one of Captain America: Steve Rogers dropped last year, an awful, awful lot of...um, let's just say, controversy came with it. Unless you've been frozen in ice for the last year and a half, you probably know the score and that the final panel of that first issue ended with Rogers uttering the heinous words, "Hail Hydra."

Yes, ladies and germs, Captain America is back, and he's a Hydra operative. Kobik has some serious explaining to do! Nick Spencer lays out the groundwork here, getting into the previously unknown history of that mysterious cosmic cube and why it has not only restored Rogers's youth, but also rewrote his entire personal history. The first three issues are pretty strong and compelling stuff, filled with action and intrigue, and some heaping doses of politics and fascism, before the last half of the book finds itself shoehorned into Civil War II, because heck if Marvel doesn't allow more than a few weeks to pass in between major events. Those Civil War tie-in segments work fairly well for what they are, continuing the story Spencer is constructing, while also existing in-between the panels and story of Civil War II itself. It's oftentimes obtrusive to the burgeoning Captain America storyline, and if you haven't read Civil War II you'll probably be scratching your head at the lack of resolution or what it all means. But hey, welcome to modern Marvel Comics!

As for the revelation that this particular iteration of Captain America is a Hydra agent? When I first heard this news a year ago, I was adamantly opposed to what Spencer and Marvel were doing here. A short while before its publication, my fellow Americans elected the living embodiment of YouTube comments wrapped up in a flabby orange trash bag as President of the United States of America. If you're somehow unaware of this raging dumpster fire of pure Id, Trump ran on a campaign of hate, racism, and sexism, and was not at all shy about his authoritarian leanings or his love of genocidal maniacs. He's basically a moronic and ineloquent real-life embodiment of The Red Skull. Hate crimes surged dramatically after Trump's election, white nationalists were marching openly, and in the wake of all this Marvel (chaired by Trump advisor, Ike Perlmutter) decided that Captain America was somehow on their side.

But was it a mistake to make Captain America an agent of Hydra, a comic book villain allied with a fascist regime? Honestly, I'm of two minds on this. I've got a lot of conflict over this, and I keep going back and forth on it. Is it a stain on the character's legacy, an insult to his WWII veteran creator, Jack Kirby? A poor decision by writer Nick Spencer and his Marvel Comics overseers? Or, is it a well-crafted, entertaining comic book whose plot, we all know, will one day be overturned and rewritten yet again once this particular storyline culminates and Marvel gives us all another epic cross-over and eventual reboot?

I think maybe it can actually be all of these things. I'm reading this title now for the first time, and only after it all shook loose in the culmination of Secret Empire. Now that the story is done and over with, I have to admit that my initial opposition to this premise has softened. Look, the idea of taking a major, big-league superhero and turning him evil is not a new, bold, and original idea in comic books. It's happened with Superman, it's happened with Batman. Peter Parker went dark for a while when he was possessed by an alien symbiote, and was, more recently, replaced entirely by Doctor Octopus. Well, now it's Captain America's turn, and he has unwillingly and unknowingly been drafted into an army he's spent his entire life fighting. Whatever idealism the character possessed as a symbol of patriotism has most certainly been tarnished, both in terms of not just this storyline but in the character's history, but then again so has the country he represents.

Spencer has been using the two Captain America comics to hold up a reflection to our present-day society. Unfortunately, our society is filled with murderous policemen, government surveillance on its own citizens, hate crimes, daily mass shootings, and wars against foreign lands and foreign people and minorities and women and poor people and sick children. Exactly one year ago now, the nation decided that Donald Trump best represents us, that a narcissistic compulsive liar who eagerly awaits unleashing his first nuclear attack while whacking it to Mein Kampf best represents the American people, American culture, and American society. America eagerly embraced fascism and authoritarianism, while Americans welcomed, with their arms wide open, a racist con artist who's as a bright as a broken lightbulb. Certainly whatever this country once stood for has been tarnished at best, and it's a rot we may never be able to polish away. And so, under Nick Spencer, Steve Rogers has become a symbol of all this, a representation of modern-day America as we know it currently.

Is this the Captain America we need under the reign of Trump? No, it absolutely isn't. But it's the Captain America we most certainly deserve, if for no other reason than to remind us on a regular basis of what and why we must oppose the current administration and to give us something to reflect on. This incarnation of Steve Rogers is a loud warning to its readers and to the world at large, and knowing Spencer's liberal politics I can't help but view it as a solidly constructed piece of resistance fiction. On that level, it's pretty good stuff. It's got some smarts and plenty of entertainment value, and although I feel conflicted about its raison d'être, I'm not the least bit conflicted about having enjoyed it, nor in finding myself curious about where it's all headed.

Maybe it's from enjoying a particular place of privilege that I was able to enjoy this book so much and sink into it for an hour's worth of escapism. Or maybe it's because of the knowledge that this is a comic book and the story will be brief. Sooner or later, Evil Cap will have his butt handed to him wholesale, and there's gotta be a measure of vicarious enjoyment in that, right? And unlike America in the wake of the 2016 election, Steve Rogers/Captain America will have a chance for a do-over sooner rather than later. He'll be rewritten by a different author and given a new book with a new creative team and a new perspective on American life and politics, and everything will go back to normal after this brief and quite odd interruption. And if we're really, really lucky, come 2020, so will America.

Like the concept. Has promise but the execution is irksome.

The historical story flows, but the modern story seems to rely on knowledge of too many events outside of this volume, which makes for a frustrating read.

First issue of the new captain America. Is full of action with flashbacks to a very young Steve Rogers. A brilliant start to a comic run with a ending that will chill every bone in your body and have you scrambling for the next issue.

Very impressed with this something different for a change even after all the negativity i heard i read it an enjoyed.
P Harris