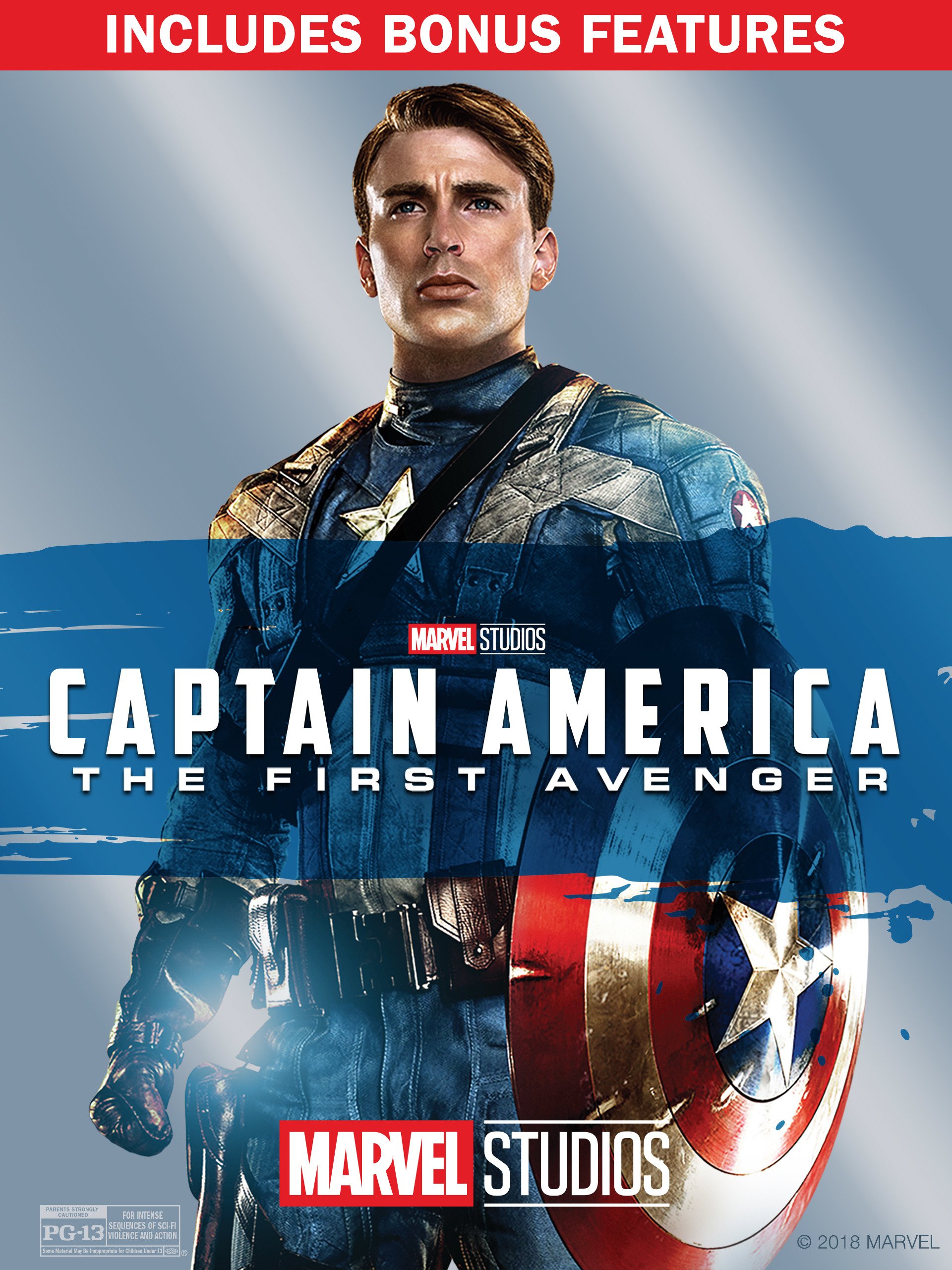 View on Amazon
It's a good thing I don't mind eating crow, because I ate a cornfield of them AND had my foot surgically removed from my mouth after I first saw this film. It's hard for me to believe that I first watched this film under duress. I first saw Cap in the comics during the first Civil War. Even though I'd never been an action comic fan before, he won me over completely.

However, when I heard they'd cast Chris Evans, I was outraged. At that time in comics, the push was to turn all the good guys into smart-aleck-y jerks, and while I'd liked Evans in the Fantastic Four (his performance was really the only thing worth watching in either movie, tbh), he wasn't built like Cap and I was convinced Marvel was going to remake Cap into a swaggering Johnny Storm clone. (Mind you, it worked great for Johnny Storm, but Johnny Storm is NOT Cap.)

Now, years later, I can't think of anyone else who could ever fill Evans' shoes as Steve Rogers or as Captain America. He's THAT kind of iconic. Marvel's done incredibly well with its casting overall, particularly with RDJ as Tony Stark, but to me, Evans went one better, simply because Steve is SUCH a difficult character to get just right. Evans captures that blend of earnestness, dedication and heart perfectly and never goes over the edge of being a goody-two-shoes or holier than thou. He's Captain America, but what always shines through is that little guy from Brooklyn who never ran from a fight.

I was further gobsmacked when I got a chance to watch the extended version of the movie and saw some of the behind the scenes. It never occurred to me just HOW much I had bought into the transformation without questioning it until I saw the actual footage of full-size Evans doing all the skinny Steve action -- floundering on push-ups, staggering in the alley, the body language and his so-palpable frustration and guilt at not being able to go. Yes, the CGI is beyond noteworthy, but it was the acting beneath that sold it. All the CGI in the world wouldn't have sold skinny Steve if the acting hadn't matched it.

As if that weren't enough, Hayley Atwell as Agent Peggy Carter is absolutely luminous. In anyone else's hands, I think Peggy Carter would have been a typical love interest. Not with Atwell. Carter is one of the best depictions of a strong female I can think of in any action movie. She's not strong simply because she can punch people and she's a great shot. She's got courage to match Steve's, belief that won't break, and she never surrenders an inch of her femininity in doing so. I loved the One-Shot they did with her and was so glad they spun it off into her own series (and I'm still sorry they didn't go for season 3!) I was equally glad to see Dominic Cooper return there as Howard Stark - I love me some Howard.

There simply wasn't a character I didn't like in this, from Sebastian Stan's Bucky Barnes, to Toby Jones' perfect depiction of Doctor Zola, to Tommy Lee Jones' crusty Colonel Phillips, to Stanley Tucci's paternal Dr. Erskine. Even Senator Brandt's glad-handing and unscrupulousness in creating Captain America in the first place worked. If there was any weakness at all, it was *possibly* Hugo Weaving's Red Skull -- but admittedly, even in the comics, the Skull is usually a pretty over-the-top villain. One thing Weaving *did* capture well was the Skull's megalomania and jealousy that he, the genius, had been forced to take the guise of a monster while a nobody American from Brooklyn became the ubermensch ideal of Aryan perfection instead.

I know some people have complained because parts of it toward the end seem cheesy, but to me, it's a beautiful homage by Johnston to the war films of the 40s. I love the faint sepia tone, too, especially in contrast with the sharply colored and focused end.

And, I'll admit it: I cried twice during this movie, and I never, ever cry. Even as many times as I've now seen it, I still sniffle.

If I have any criticisms, it's that I wish they'd kept the deleted ending instead of the one they chose (Steve has some more to say and it's a masterwork of Nick Fury manipulating Steve in just a sentence or two) and I wish they'd made it clear that Steve had no option other than to do what he did. I've seen the novelization of this, and without giving away spoilers, the novelization both makes it clear that Schmidt jimmies the autopilot so the plane can *only* be diverted off course by someone of Steve's strength, and it has Steve explain this to Peggy as well. If you watch closely, you can see Schmidt breaking off a certain switch, but it's easy to miss. It's a bit annoying because I've seen countless people complain that Steve didn't look for options -- but in fact, there were no options other than the one he had, and people are too quick to forget that sacrifice is not only a part of war...it's pretty much what you'd expect out of a super soldier.

I would recommend getting the Blu-Ray or at least the extended version so you can see just how utterly amazing the transformation really is. I'm still sick this didn't get nominated for something. After all, when it's *so* good we don't question it -- that's when it's truly noteworthy.

Buy it, watch it, love it. You won't regret it.

I'm certain I've seen this movie dozens of times now, and I swear I like it better every time. I'm sure some of my admiration stems from what a great guy I think Chris Evans is. But mostly I think it's a product of the fact that while the Cap character has continued to evolve spectacularly, he has always held the core of what we see here in this movie.

I liked Cap somewhat when I read him in the comics growing up, but the X-men were my jam way back then. I think his evolution through the movies had a solid base starting here that helps me connect with the character better than I ever could with the comic version.

The movie is wonderful, and while I think it has some issues, it never failed to help me connect with the characters. I cried when Bucky died. I cried when Peggy had to let Steve go, and I cried again when we saw that look of anguish on Steve's face as he says he had a date.

Cap has never failed to make me feel things that I rarely feel for super heros or movie characters in general.

I am sorely going to miss him after Avengers 4, but like all good things... Chris Evans must move on to other things.

I am still completely impressed with how they CG'ed little Steve. I will forever be in awe with how much that must have taken for Chris Evans and his stand in to get all that right.

The only reason this doesn't get 5 stars from me is I did not fall in love with it on first blush. There were just too many little bits here and there that kept me from loving the movie as a whole, despite the fact that I adored Steve, Peggy, Bucky, the Commandos and Col Phillips.

My kid was probably a little young to watch it, but he had been begging me and his grandpa was willing to watch it and had never seen it. To move focus from the violence and deaths and some adult language, I would speak up to reiterate and reinforce the qualities of Capt America's character that made him the choice to become Capt America, the importance of not being a bully, and helping those who may need your help. I've seen the movie before and really enjoyed it, but watching it this way really made me realize Marvel did a superb job with stressing being a good person in life.

This film is absolutely brilliant.

Joe Johnston (The Rocketeer) has created a wonderfully immersive period piece and superhero epic. Johnston crafts a fantastic origin story for one of the oldest and beloved superheroes in comics history.

Great packaging, additional digital copy and a great film all in one perfect package for a great price.

Great movie! I was so excited to see this when it came out and it didn't disappoint.
Chris Evans is fantastic as Steve Rogers. He just seems like he was MEANT TO play that part. Sebastian Stan as Bucky is wonderful as well. Love their friendship.

And Evans chemistry with Hayley Atwell is superb!

As a stand-alone, it's a little too hammy for my taste. The world is nuanced; this story is not.

Viewed in tandem with other Cap movies, this movie is exactly what it needs to be. This represents the worldview of the 1940's, the context that Cap is coming from in subsequent Avengers and Cap movies. It's what they contrast against, and they are better for it. That's not enough to make me say this movie is good per se. As I said above, it's what it needs to be for the saga.

Hated this when it first came out because set in 1940 and thought was slow, but after watching nearly 15 of avengers trilogy I can appreciate how and what this movie was about now. Each movie is so interlinked with each other some way or another is so crazy. Started watching them and collecting in 3D since Nov 2019 never had chance before with kids and work and life lol and I have a full blown home cinema that 99% of people would love to have but sadly for last 4 years never got to enjoy it much. But now making up for it lol thanks god for my younger one starting school now when I'm off I can enjoy a movie or two before hes back then spend rest of day off with him.

If you're into the Marvel superhero stuff ie you read the comics when you were little like me, you'll love this screen adaptation of the character 'Captain America' . If I were to be critical , I'd say the acting was a bit cheesy in places but overall the film gives you that 'feel good ' factor and the sense that somewhere out there in the world, there are heros like Captain America. Good , entertaining stuff.

Far FAR better 3D conversion over the lacklustre 3D treatment of the (1st) Thor film. This Marvel film is up there with the latest MCU blu-ray releases with real depth and clarity to the picture. It really adds incredible depth especially in crowd scenes which really immerse you in the enviroment. There are some great stand-out 3D moments from the movie from start to finish. Recommended!.

This is a brilliant start to marvel superhero film. I didn't think it was as good as Iron man but just as good or better than Thor. I would certainly recommend seeing this film if you like marvel films or fantasy action films as this is a great film. Chris Evans was a great act for Captain America and I can't wait to see him in the sequel The Winter Soldier in 2014. Also the action in this film was great not as good as the action in Avengers Assemble but of course it wasn't suppose to be. It is worth seeing if you haven't so yet as I seen the Avengers first so didn't know much about Captain America and how his story begun. But all in all brilliant film.