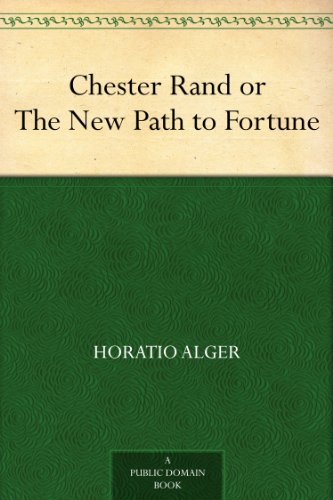 Chester Rand or The New Path to Fortune

This book was converted from its physical edition to the digital format by a community of volunteers. You may find it for free on the web. Purchase of the Kindle edition includes wireless delivery.
View on Amazon
I like Horatio Alger's boys novels, I like to see the characters go from poor to well to do maybe even rich. The morals they show help remind me of values, I grew up with.

This one shows a boy artist and how he learns to make a living at it.

It is a bit lighter than most of his works.

Chester Rand is 15yrs old and the son of a widow, they were a poor family, Chester worked at the local store for very small wages but after being given a pay cut left. Chester was asked to show a Mr Conrad around the village, after drawing something for him Mr Conrad was most impressed, he offered to try and sell the pictures., on his way home he meets a shabby looking man who turns out to be his former bosse's nephew, he is very unwell and Chester takes him home where he dies after leaving some property in Tracoma to Chester for his kindness.
Chester sold his picture for 10 dollars, during this time Chester is accused of stealing money by his former boss but manages to prove his innocence,after selling another two pictures Chester leaves for New York to work for a Real Estate company Mr Conrad had found for him and being able to continue drawing pictures as well, on his way to New York an old man admires his pictures and asked him to illustrate a book for 200 dollars.
As the story continues Chester comes across a crooked book keeper who tries to make trouble for him, he continues to draw pictures for the book and meets the mans young nephew who becomes his friend, Chester's boss goes away and he is sacked while the book keeper is trying to steal from the company but he is caught and Chester finds a new job, many more adventures follow while Chester is trying to make his fortune
A free book, quite long and certainly worth a read