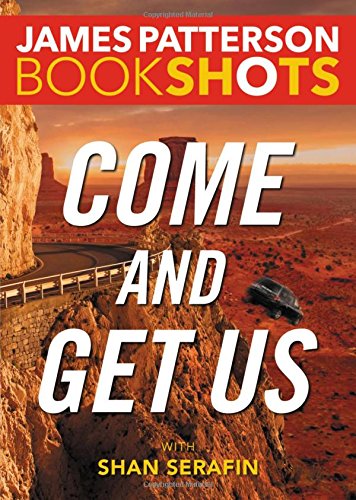 Come and Get Us (BookShots)

By: James Patterson and Shan Serafin

In this exciting thriller, an athletic soccer mom and her family face a car chase . . . and the most deadly enemy ever.
Miranda Cooper's life takes a terrifying turn when an SUV deliberately runs her and her husband off a desolate Arizona road. With her husband badly wounded, she must run for help alone as his cryptic parting words echo in her head: "Be careful who you trust."
BookShots
Lightning-fast stories by James Patterson
View on Amazon
Summary:
A family trip takes a deadly turn when Miranda's car is deliberately run off the road.  Her young daughter is shaken, her husband badly hurt, and there's no help in sight.  Miranda must move forward, climbing a mountainside in search of help.  Her husband's parting words: "Be careful who you trust."  What exactly has he gotten them into??? Dodging killers and running on fumes, can the family make it out alive?
My thoughts:
Holy heck, what a ride!  Buckle up and make sure to allow for a lot of suspension of disbelief.  While there is a lot going on that, let's face it, would never really happen... isn't it that way with most action/ thrillers?  This one may be a bit over the top, but it was fun, interesting, and, as promised, a lightning-fast read.  The story was really perfect for a bookshot.
I enjoyed the main characters, Miranda, Aaron and little Sierra.  I liked the dynamic between the three.   The premise caught my attention right away, and I was really interested.  It quickly became a favorite of mine.  Five Stars!
On the adult content scale, I give it a four.  There is some language and violence, but I have honestly read worse in a YA novel that I still handed to my 13 year old niece.

While I love all of JP's book, this one was RIDICULOUS - the concept of this "hero mom" running, climbing and entire day without food or water running from bad guys, killing two dudes with her brute strength from the strength in her climbing hands and running again for hours with no food or water pushes the envelope over the edge for me. LOVE January LaVoy as a reader tho. And a husband who should have been dead within the first few hours from blood loss....not believable.

A high speed chase, a car accident, a secret hidden away from the family, and a fight for survival! Not knowing why someone was out to kill her, Miranda fights for her survival, doing things she never thought she was capable of in order to save her husband and daughter. At the end, the family secret is revealed, and her husband and she take down the entire operation, getting the justice they deserve.

This story starts with action and continues throughout the book. Even though the characters aren’t deeply drawn, the main character is likable and courageous. When faced with overwhelming odds, she reaches deep inside her self to protect her family.

I read the book in an hour’s time, and it kept me entranced. If you’re looking for a quick read that will keep your attention and you like action stories, give this book a try.

Just not Patterson at his best. Plot twists were unbelievable, but not necessarily in a good way. Maybe not.long enough to really develop the characters and plot. But then again these are ‘book shots’!

What a movie this would make! Drama, intrigue, suspense, it has it all and more, the absolute power of love, trust and faith in your family but also in yourself. What more could you ask for - nothing.

The Cooper Family are travelling through the canyon when they are intentionally run off the road by an SUV.
The family members are fighting for their lives in this thrilling book that has lots of action from beginning to end.