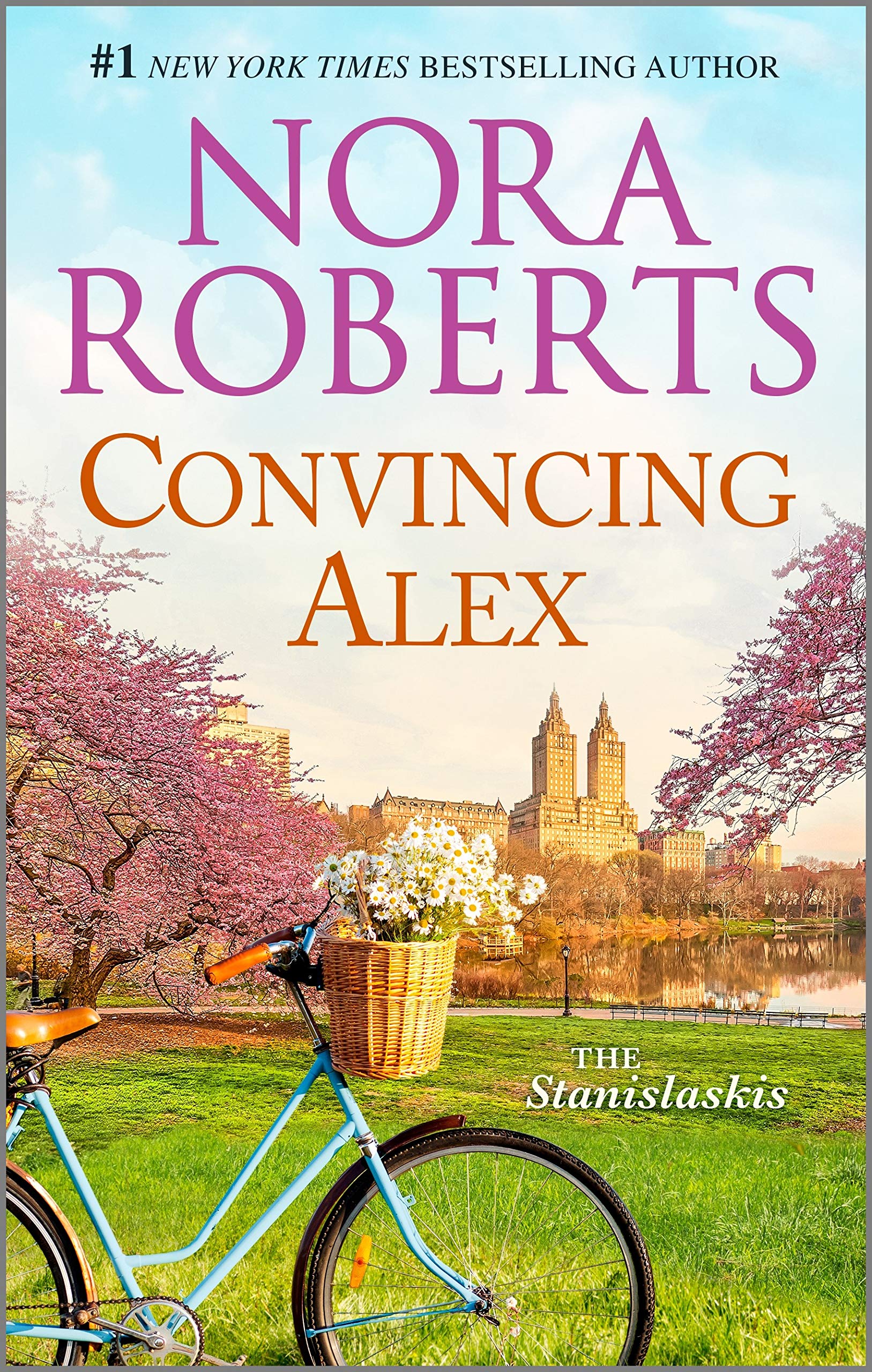 Detective Alex Stanislaski thought he’d seen it all—until he mistakenly arrests the daringly bold soap opera writer Bess McNee for soliciting. Committed to understanding her characters, Bess often looks for research opportunities to help her write the best she can—and accidentally being arrested gives her the best opportunity of all. She decides to follow the sexy detective around to get “ideas” for her show, but Bess will soon discover that Alex is not only perfect for research, but maybe a perfect match for herself, as well. Now all she has to do is convince him she’s right…

Previously published.
View on Amazon
Convincing Alex is the fourth of six books in Norah Roberts' fine and fascinating series on the Stanislaski Family. It's NOT a new series of books, so if you've been reading Nora for a couple of decades, as I have, you've probably already read all six and enjoyed them once. They're worth another read and these e-versions definitely belong on the Kindles of Nora's devoted fans. Just be careful and try to read them in order; Amazon doesn't make this easy because on the KINDLE Bookstore site, if you search for "Stanislaski series," you'll be taken to a page that has the first two (or maybe three) in the order in which they were written, but gets the others all mixed up! To help you out, here is the chronological order of the series (and a couple of words on the relationship between Natasha, featured in the first book in the series, and the protagonist of each novel):
1. Taming Natasha
2. Luring a Lady, featuring Mikhail, Natasha's brother.
3. Falling for Rachel, featuring Rachel, Natasha's sister.
4. Convincing Alex, featuring Alexi, Natasha's brother.
5. Waiting for Nick, featuring Natasha's brother-in-law's brother!!
6. Considering Kate, featuring Natasha' s daughter.
In all of the books, you'll also meet or renew your relationship with Mama (Nadia) and Papa (Yuri) Stanislaski. Enjoy!

So I read this series for the first time years ago. And I'm talking 15 years or so. At the time, I loved it, just like the rest of the series. I've re read them several times. This time when I read this particular story, however, it occured to me that I dont really like Alexi. To me, he comes across as a bully, and a jerk. The way he pushes Bess around just really irks me. Nora does her best to make him likeable, and in some cases he is, but I really just hate how he talks and treats her through out the story. Maybe because I'm older, more mature, Ilmore jaded, I don't know. It was just hard for me to finish this book, even knowing I've read it before.

This book is part of the Stanislaski series by Nora Roberts, an older series that I am re-reading and enjoying just as much the second time around! I purchased a second-hand book that was pretty much as described by the seller, not in perfect condition, but very much okay.

This was my least favorite, primarily because I didn't care for the hero. He has always been the least featured of the siblings, and I didn't think he really brought anything noteworthy to his own story. The heroine was engaging enough, and I liked her work as a soap opera writer. I didn't really buy their HEA, because if nothing else, the end proved he really doesn't know her that well.

Also, while Roberts does an incredible job as JD Robb now, at this point in her career (and probably the fact that this is "only" a Category Romance), the cynical cop tracking down a serial killer didn't really play for me.

But as always, the large family scenes and the various relationships and interactions were pure pleasure, and I look forward to the next book.

One of the author's early books, but a fun one. A great romance, with heart and characters
That you feel like you know! The people grow and love,and are the family we,all wish we had!

Nobody makes characters come alive like Nora Roberts. This story was so good I wanted it to go another 200 pages. It may have been a bit predictable (Alexi and Bess were made for each other) but I don't care. These folks leapt from the page and I hope the entire family moves in next door. Enjoyable from beginning to (sob) end. Thanks, Ms. Roberts.

This book is scorchingly hot. Two very different people meet under funny/scary circumstances. But the change in each makes you want everyone to be able to accept each other as well. It makes me think of a verse from the Bible that says, “A friend livery at all times.” Thank you Nora Roberts for a great book.

Reading this book again was so heartwarming. Reminded me once again of why I fell in love with Nora Roberts books all those years ago.

I enjoyed this book, full of romance and done very well. I like Nora Roberts books, they have the feel good factor.