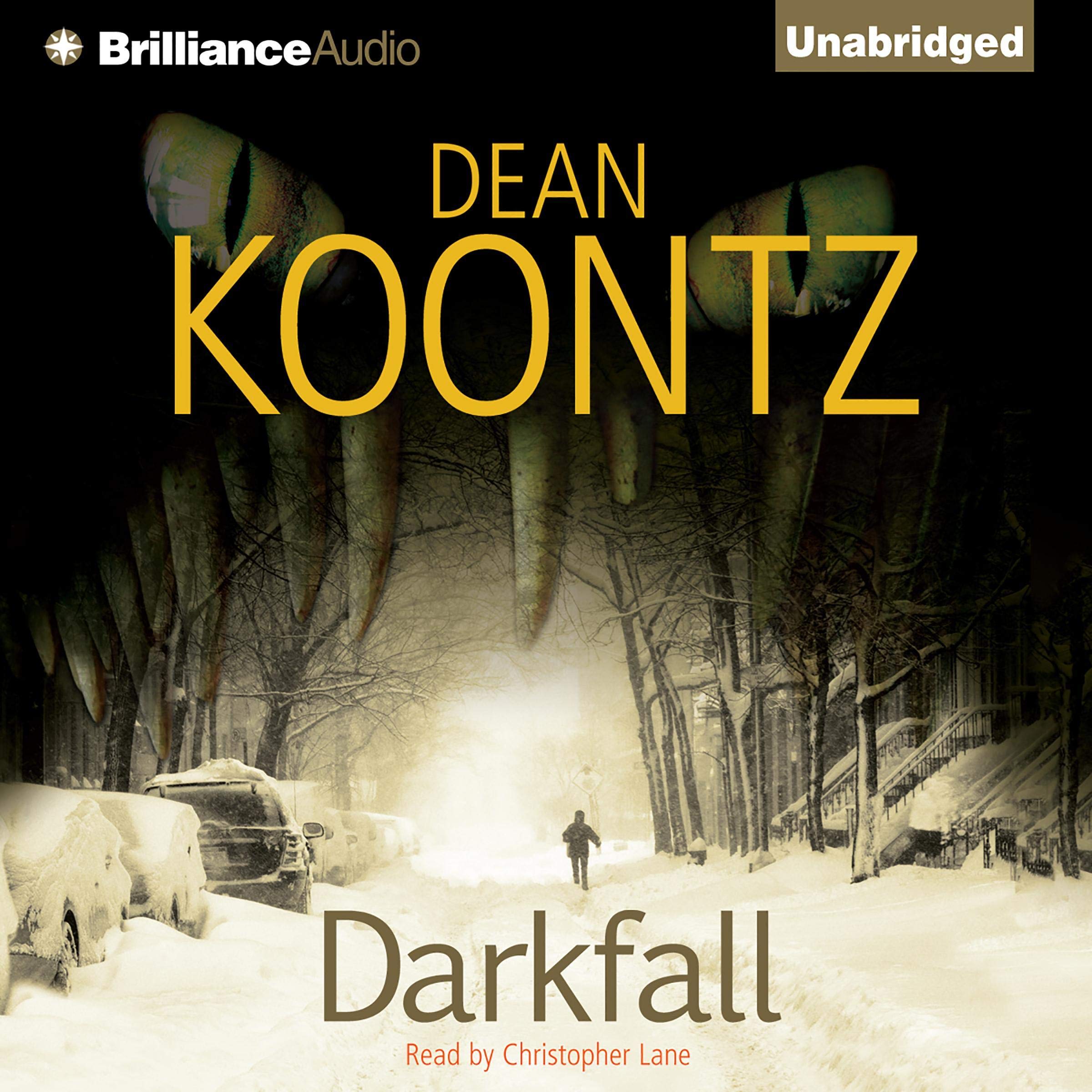 Strange days....
Winter gripped the city. Terror gripped it, too. They found four corpses in four days, each more hideous than the last.

Strange nights....
At first the cops thought they were dealing with a psychopath. But soon they heard eerie sounds in the ventilation system - and saw unearthly silver eyes in the snow-slashed night.

Final hours....
In a city paralyzed by a blizzard, something watches, something stalks.

View on Amazon
This was another good "scary" book by Dean Koontz. I love the way this guy writes. He is very articulate, very rarely uses profanity, and keeps you wanting to continue to read until the end. I have quite a few of his books and have never been disappointed in reading any of them.

I most heartedly give Mr. Koontz a five star rating! If I could give him a ten star, I would most definitely do that, but alas, such a rating is not possible; though I keep my hopes up that one day the God of critics will be benevolent enough to let me use a ten star scale some day soon.

Mr. Koontz has for many years been writing stories that capture the attention and imagination of his audience. In fact, the first "horror" book I ever managed to read was The Door to December. I happened to get the Door to December for free at the public library in the small city of Sierra Vista, AZ. I picked up up for my mother as a joke since she REALLY enjoyed reading Stephen King. At that time I absolutely hated horror/suspense books, but unfortunately I was out of books to read and enjoy, so I decided to pick up that book and read only a chapter or two so I could say in all honesty I gave the author a chance and make fun of my mom for reading such garbage. A hour later I was so engrossed in the story my mom had to drag me out of her bedroom (the only place in the house quiet enough to read) and over to the table to at least try and eat something. After another hour passed I finally finished reading the book. I couldn't put it down!!

Now, as for this book called Darkfall, it is (I think) one of Mr. Koontz's best stories. The writing itself is written in such a way that young adults/older children can read it, but the story line is amazing. Mr. Koontz has an amazing ability to pull his audience into the world he created. If and when he comes out with a new book, you had better watch out because I intend to be the first person in line to purchase a copy of his latest work.

Koontz is hit or miss for me. This one is a miss.

The story feels dated and the writing predictable, simplistic and cliche. It must be one if koontz's earlier works.

The characters are cliched in appearance, actions and vocabulary. This makes them simple, boring and incredibly predictable in an already extremely predictable plot. Our hero(s) are beautiful and flawless both in appearance, integrity and avtion even when they aren't, even when they do something questionable, they are written as if they are shining examples of humanity.

For a very glaring example, our main character hero, single father policeman, doesn't do anything when his children are threatened if he doesn't "back off". He gets a call threatening horrible torture and death to his children if he doesn't stop investigating. Does he call his kids or the relative they are staying with? No. Does he go to them? No. Does he call the police? No. He goes to work. He tells his boss who offers to take him off the case. He refuses. Does he call his kids then? No. Does he request police protection? No. Does he even request a policeman to check on them? No. He decides that since they are at a relative's house, they are safe. And so does nothing except continue investigating. WHAT?? How is this logical? How can he possibly believe they are safe without even calling someone? Then, he is done at work. He THINKS about going to his kids. DEBATES where to go. Does he go to his kids? No. He goes to his lover's house. Oh, yeah, and there is a horrible snow storm going on that has resulted in abandoned cars on the roads. He has not once called to inquire yo hid children's safety. I found this ansolutely redicilous. I can't stand when writers include children as some plot device to give our hero (supposedly) something to agonize over, to be threatened for the purposes of (attempting and failing) to create suspence and cruelty, include children with such an utter lack of reality, real responsibility or realistic emotional involvment, actions or reactions. This plot device in Darkfall read as silly to me, and had the opposite effect as intended. This is a big example of what the whole book suffered from. Characters either existed in a non-reality only to stretch logic and normalcy to further the struggling plot or characters reacted in inhuman/uncharacteristic ways to further the same simplistic and laboring plot.

However, Koontz has always had a way with words, often poetic, and his descriptions can be vivid and fantasic. The bad guys, though over the top in the case of Darkfall, seem truly evil. And I enjoy how he writes children, and Darkfall is no exception. The book was interesting enough that I finished it, but it will be going to the Goodwill and will not become a part of my library.

The title of this review seems a little odd from a fan. If I could meet Mr. Koontz I would thank him for providing me with so many hours of thought provoking entertainment.

Darkfall seems to have gotten several bad reviews. This puzzles me greatly. This is a very entertaining book. No, it is not his greatest work. If I had to name his greatest book, I couldn't do it. They are all unique and special in their own way. It is a shame he did not continue a series with these two cops. I think they would make a great continuing story.

What I hate about Dean Koontz is the fact that when I start reading one of his books at bed time I usually lose a night's sleep. This book starts slow but once it gets rolling, you can't put it down. Darkfall cost me a whole night of sleep and the following day to recover.

If you haven't read a Koontz novel, be prepared for an extrodinary experience.

I found myself intrigued from the beginning to the end once again Dean. It's always a heart pounding need to get to the end. I've always enjoyed your novels for at least 25 years. This ain't a new novel either, but just the same, I enjoyed the ride. Thank you for the suspenseful rides I go on reading your novel.

I've read quite a few books by Dean Koontz. Some have verged on brilliance - False Memory, From the Corner of His Eye, and One Door Away From Heaven, for example. Some have been supremely average. Darkfall is, however, a terrible book.

I bought this book on the strength of the Dean Koontz name, and the fact that the Kindle version was only 99p. I accept that this is an old book, from the 1980's, and therefore early in Koontz's career. But it's still a bad book.

Firstly, the prose throughout is so uneven, I soon began to wonder if this really had been written by Koontz at all. Large sections of the text read like something written by a teenager struggling to blend the various writing disciplines. I was frustrated with some scene desciptions that were totally out of sync with the events in the story.

Secondly, the 'monsters' were unintentionally hilarious. Every time they showed up, I was chuckling.

The use of voodoo in the story lacked authority. I'm no expert on voodoo, so I'm not commenting on the accuracy of how the author describes voodoo. What I'm saying is that, it is the writer's job in any book to write with a sense of authority on his subject. I read loads of books about things I'm not familiar with, but from which, through the skill of the author, I infer a sense of authority. The voodoo described in this book just doesn't feel authentic, and it's difficult to put my finger on why. Part of it might be a reference to golems, which immediately put me in mind of Jewish mythology rather than voodoo.

The characters in the book are without exception two-dimensional and boring. Worst of all is the protagonist, who behaves like a pawn being moved around the chessboard of the plot at the author's whim, completely out of touch with what we are told is his personality.

The climax of the plot is massively disappointing, as the conflict between protagonist and antagonist is never fully resolved - mainly because the antagonist ends up being little more than a maguffin.

The book was so bad that rather than just giving up on it, I forced myself to read to the end just so that I could have justification in writing this review which will hopefully help readers make an informed decision, as opposed to just assuming that Koontz name is a guarantee of quality.