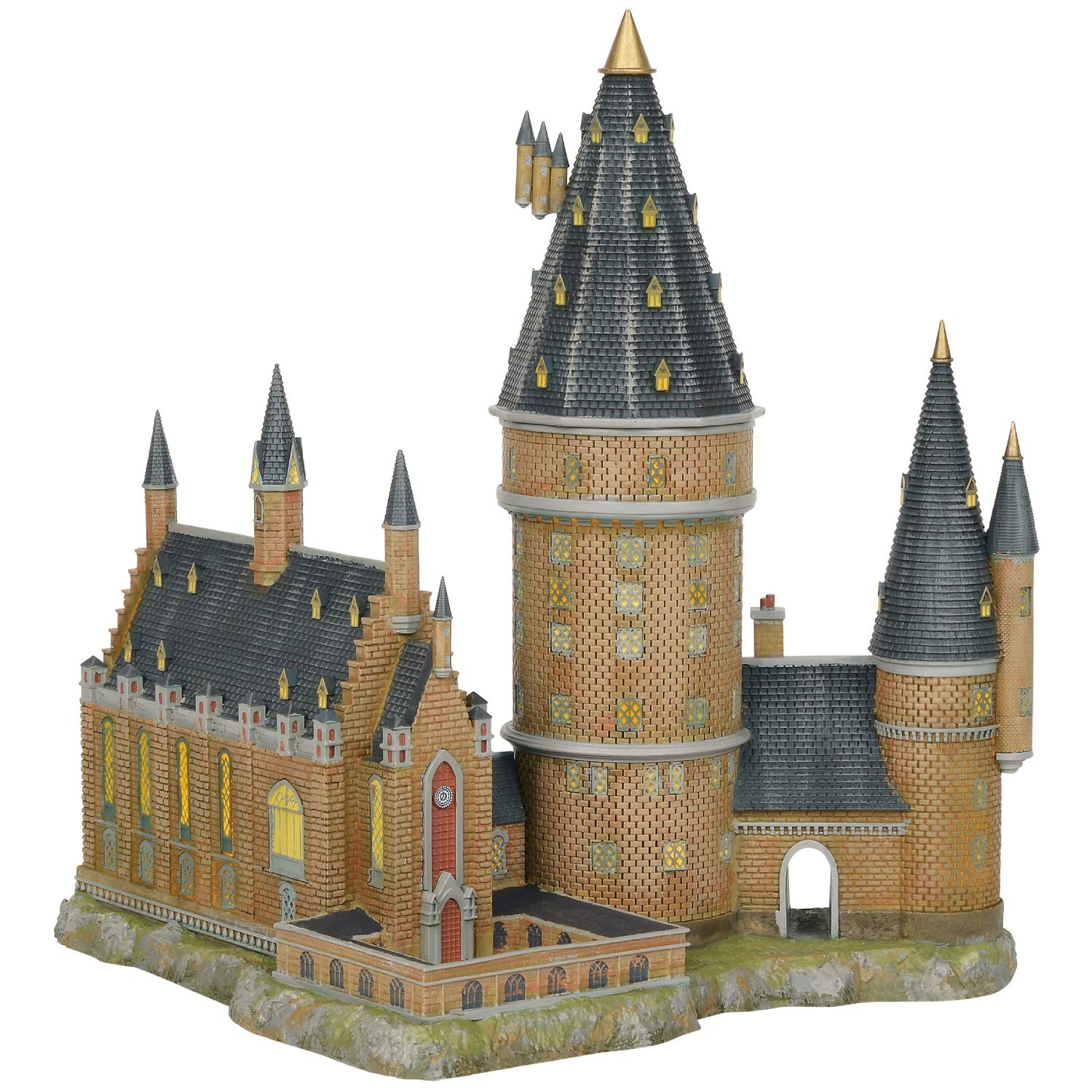 View on Amazon
Where to start... the Department 56 Hogwarts castle I received was a disaster in quality. It came with horribly uneven paint job and two missing windows - we found one window loose in the package, the other window, nowhere to be found. To be clear, the windows are not supposed to be removable at all.

While the castle is designed to have semi translucent walls, because the paint is uneven in parts, the lighting ends up being EXTREMELY uneven. The translucency is so bad on the tower - it makes Hogwarts, looks like a massive ORANGE abomination in the dark. The roof of Hagrids hut (not included), suffered from the same lighting defect - to me it's okay if the roof is semi transparent, but it should be DARKER than the walls of the building. Unlit, they all look better, but...what's the point of that?

If you want to see quality, look no further than Ollivander's wand shop (not included). This is actually a beautiful piece - appropriately lit and begging for other neighboring building from diagon alley to be created.

This set leaves you begging for the Harry Potter winter village that could have been. Department 56, if you're listening - I will open my wallet again if you can fix these problems. PS - Hogwarts could also use a 2nd companion piece to make it feel bigger!

We are huge fans on Dept. 56 Christmas Village home and happen to also be huge Harry Potter fan so this one seemed like a no brainer. Except when it arrived we were beyond dissappointed - its made of resin - NOT CERAMIC - so it feels like plastic! There is no bulb - just a light that can't be reached - who knows what we'll do when that lights goes out. And - the size is way off - it's smaller than out Dept. 56 town homes, and deppt 56 train station - looks so silly

I love my department 56 houses and thought this would be a good addition. I read some other reviews that complained about the quality. It isn't as nice as my other houses and the paint isn't uniform throughout the piece. I've posted pictures and you can see the roof is very patchy and one of the towers is definitely lighter. There are also little gaps throughout the piece where there shouldn't be and you can see light. The sizing is off and would look strange with my other pieces. I'm going to return and hope that department 56 comes out with a better version in the future.

This looks ok not lite up. It is resin or plastic. The scale is on the small side. If you made a mountain to put it on I guess the forced perspective would make the castle look like it’s in the distance, but sitting next to Hagrids Hut the scale is off. The paint is pretty blah. I might touch mine up with some accents. This quality is not as good as other Department 56 products.

It was bought for a Christmas present for my husband. He's a fan of the Harry Potter books and films!!

Got for a Christmas gift... my daughter loved it.

It’s plastic!! I have been collecting Dept 56 for many years and have always loved their quality and attention to detail. What were you thinking?? This isn’t a quality collectible, it’s a children’s toy. Extremely disappointed.

I have lots of Dept 56 Christmas and Halloween pieces and was SO disappointed when this arrived it it was made of resin. I am huge fan of Harry Potter and was looking forward to this collection. I ended up returning both pieces that I bought.

Excellent quality castle fits in nice with our decor and was a hit for our number one Harry Potter fan.