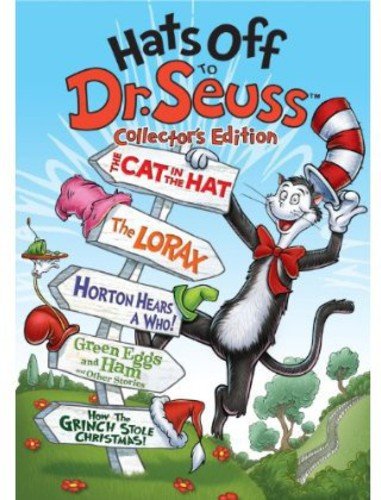 View on Amazon
This is a surprisingly robust collection of Dr Seuss animated programs, most of which were originally TV specials in the '60s through '90s. The front cover highlights the five best-known stories and the back lists four more, but in total there are actually 12 scattered across this five disc set if you know where to look.

The Cat in the Hat disc also includes Daisy-Head Mayzie and The Hoober-Bloob Highway as special features. Likewise, The Lorax disc includes Pontoffell Pock & His Magic Piano and The Butter Battle Book. The Horton Hears a Who disc also includes Horton Hatches the Egg as well as duplicates of Daisy-Head and Butter Battle, with all four stories presented alongside each other in a "Features" menu (not to be confused with the Special Features menu). Green Eggs & Ham is actually the third act of a TV special originally called "Dr Seuss on the Loose" which also includes The Sneetches and The Zax. The Grinch is the only disc without additional stories, although that one has special features galore.

Also of note, there is a live-action program from 1994 included in the Horton disc's Special Features called "In Search of Dr Seuss" which includes edited alternate versions of several animated Seuss stories found in this collection as well as live-action retellings of some additional stories.

My only complaint is that the video and audio quality varies a bit from title to title, more so for the lesser-known stories, but that should be expected considering the age and original production value of some of these TV specials. Other than that, this is a fun (and educational) collection for kids and a great nostalgia trip for adults.

We had seen almost everything on here before (which we knew). Unfortunately, an unexpected disappointment came with the first disc. The Cat in the Hat video does not bear even a passing resemblance to the original story. It was not well written, either, especially the songs. The rhymes were so lazy it was painful to listen to. It was like someone pretending to be Dr. Seuss. There was also no reason whatsoever to have them all on five discs. One disc for the movies (about half an hour each), one for the bonus features. That was all that was needed. If you want to watch more than one, you have to change discs. No, nobody ever died from having to change a disc. But why? To make it look like there was more to the set? It IS nice that there are a lot of smaller Seuss stories as bonus features, and the documentary (which, ironically, is longer and more interesting than any one of the movies) is a nice inclusion, as well.

This is a great collection of classic Seuss cartoons. There are many that I had never seen before (and that my toddler doesn't quite enjoy) - many of these lesser-known titles have more adult or even political themes. Very interesting to watch!

Love the classics. Nothing wrong with them except they do tend to take you back to the old days when we were young and happy...

Though the episodes may seem short this is a great compilation. Very entertaining for the entire family.

For home viewing this is fine but the Dr. Seuss movies could use an update. Enough said.

I would buy it again.

A lovely collection of remastered older cartoons from Dr.Seuss.Just the right length for my granddaughter who's five. There's a sing-along, a documentary: In search of Dr.Seuss and loads of extras including interactive puzzles. It says in the product description that it's region A but it plays fine on my region B Sony BDP -S7200 and, I would imagine, on any other. Other reviews seem to think that it's ' a bit pricey ' but I suppose it's relative, I think that it's money well spent.

My granddaughter loves it.