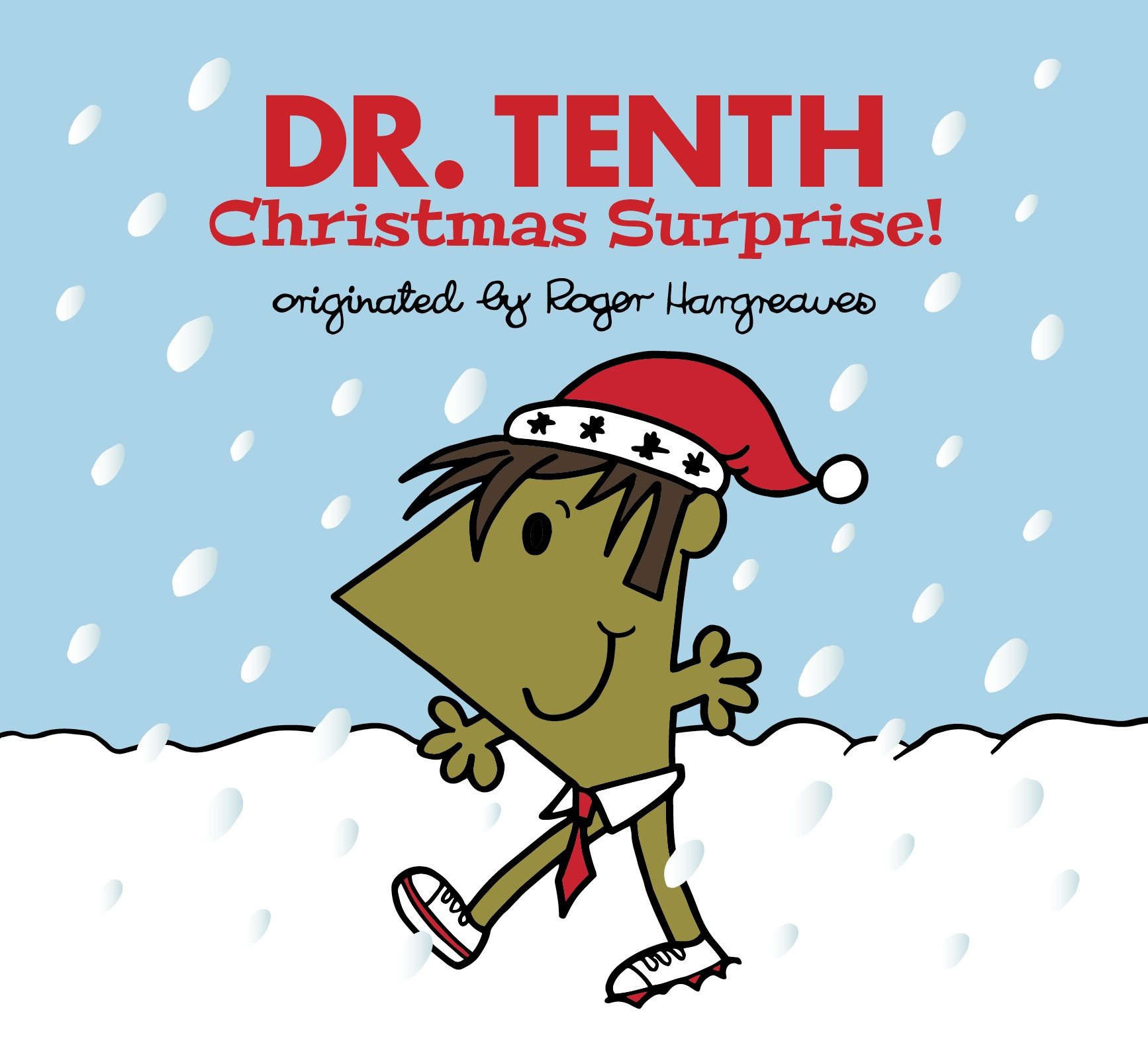 An all-new deluxe hardcover Doctor Who Christmas adventure featuring the Tenth Doctor and his companion Donna--reimagined in the style of Roger Hargreaves.

It's Christmas Eve, and the Doctor and Donna are sipping at mugs of hot chocolate. Donna looks to the Doctor and announces, "I hope I get a surprise for Christmas." The Doctor knows what he has to do.

These storybook mash-ups, written and illustrated by Adam Hargreaves, combine the iconic storytelling of Doctor Who with the whimsical humor and design made famous by his father, Roger Hargreaves.

Dr. Tenth: Christmas Surprise! is the first hardcover special in this series of witty, tongue-in-cheek storybooks featuring the twelve Doctors.
View on Amazon
I have to admit to taking a lot of joy in these little Doctor Who books from Adam Hargreaves. In general, they offer fun little stories and drawings based on the show’s mythology. This one, though offering these general pleasures, is not quite one of my favorites.

It may be a bit pedantic of me, but when a story strays too far from the stories I know, it rubs me the wrong way. Here, in an effort to create a Christmas story, Mr. Hargreaves brings us attacking snowmen, attacking mechanical Santas, and an attacking Christmas tree but, of course, the Tenth Doctor dealt with attacking Santas and trees when Rose was his companion (not Donna) and deadly snowmen in his eleventh incarnation. It just doesn’t feel quite right.

But who am I to complain much about a cute Christmas book? It does what it’s meant to do—provide some fun for the younger fans of the Doctor out there.

This short book contains an adventure with the tenth doctor and Donna Noble. It involves evil snowmen, Santas, and a Christmas tree. This story is very cute and easy to read. Doctor Who fans should enjoy.

The way it presents the Doctor and Donna is very typical, with a very festive feel with the way they approach their adventures, very entertaining! c:

It’s ok. The story is just meh with really forced dialogue and weird transitions. It certainly doesn’t read anything like Donna or Ten. Still, it’s Doctor Who Christmas book so if you’re a fan it’s still worth it. I especially like that it’s a good way to get the offspring reading and knowing Doctor Who!

Just as described, thank you!

Big fan of the Mr. Men books. Dr. Tenth is absolutely delightful! A must have for all fans of the Tenth Doctor.

It's the Doctor and my childhood. Enough said.

Doctor Who Christmas specials have virtually become an institution since 2005. Therefore, it only seems fair that the Dr. Men get their own.

It features the Tenth Doctor, making him the only one of the Dr. Men to receive two stories to date (‘Dr. Tenth’ actually being published after this). It also features Donna Noble (perhaps, not as well graphically represented as some of the other companions and Doctors have been). Both find that their Xmas celebrations within the Tardis are abruptly interrupted as adventure ensues.

It is, perhaps, not quite as entertaining as some of the other Dr. Men books because the centring it around Christmas limits it a bit. It is still an amusing little read and, unlike, the other books in the series, comes in a nice hardback edition.

This is an additional volume to Adam Hargreaves' 'The 13 Doctors Collection' where all the Doctors, and villains and companions become Mr. and Misses characters as created by Adam's late Dad, Roger.

This is a wee adventure of Doctor Tenth with a Xmas flavour. As with the other books, it is short, aimed at both children and big children, but it keeps the right voice for the Doctor. An enjoyable little read. Best bought with the Collection!