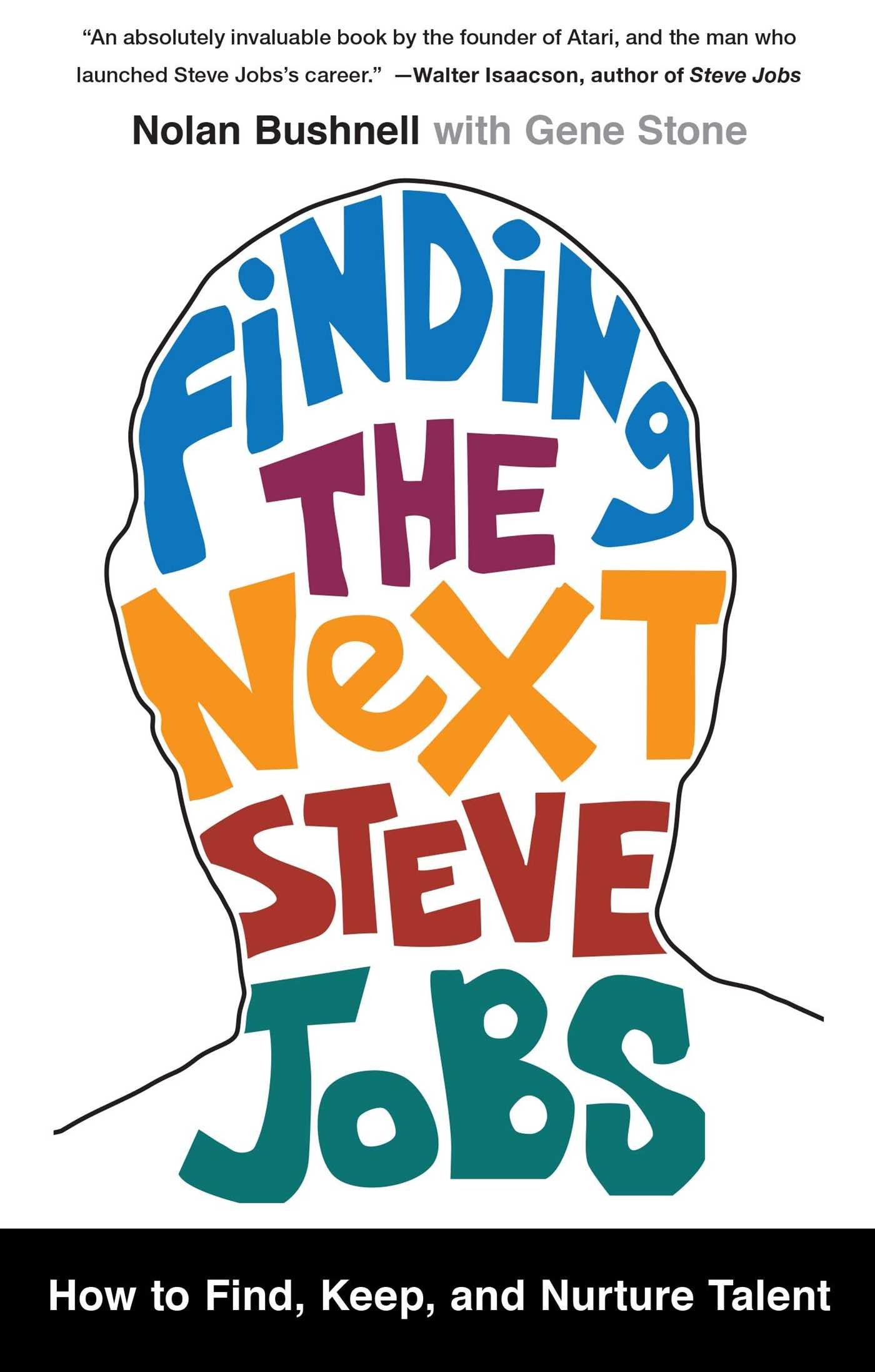 Finding the Next Steve Jobs: How to Find, Keep, and Nurture Talent

By: Nolan Bushnell and Gene Stone

From the legendary founder of Atari and Chuck E. Cheese’s and Steve Jobs’s first boss, the secrets to finding, hiring, keeping, and nurturing creative talent.

The business world is changing faster than ever, and every day your company faces new complications and difficulties. The only way to resolve these issues is to have a staff of wildly creative people who live as much in the future as the present, who thrive on being different, and whose ideas will guarantee that your company will prosper when other companies fail.

A celebrated visionary and iconoclast, Nolan Bushnell founded the groundbreaking gaming company Atari before he went on to found Chuck E. Cheese’s and two dozen other companies. He also happened to launch the career of the late Steve Jobs, along with those of many other bril­liant creatives over the course of his five decades in business.

With refreshing candor, keen psychological insight, and robust humor, Bushnell explains in Finding the Next Steve Jobs how to think boldly and differently about companies and organizations—and spe­cifically the people who work within them. For anyone trying to turn a company into the next Atari or Apple, build a more creative workforce, or fashion a career in a changing world, this book will enlighten, challenge, surprise, and amuse.
View on Amazon
I first bought this book because I thought to find more anecdotes about a young Steve Jobs as the title was suggesting.
In fact there some stories about Steve but nothing more then I already knew.

Then I start to find Bushnell "pongs", as he call the different sections of the book, quite interesting and under certainly point of view delightful. But honestly they are less then stories, really summarized, maybe the longest "pong" is 4 pages. If you take out of the book all the blank pages the book would be probably half of its actual size. It is not matter of waist of space on the book, which would have been better filled up with longer stories and more details, it is that it seems they wanted make the book look bigger then what it is in real.

Anyway I enjoy reading it and I could get to know better the genius of Bushnell.

This book was both inspirational and insightful to me, particularly since I had the pleasure of interviewing at the corporate office for Chuck E. Cheese's Pizza Time Theatre during the very early 80's. So many friends went on to work for Atari, Apple, etc... As a creative, the pleasure and excitement of both living and working in Silicon Valley has brought great joy and meaning to our lives. Nolan Bushnell & Gene Stone have both put into words how to find, hire, keep and nurture the unconventional minds it takes to make-up (in my opinion) what has become the "Florence" of our time. The most successful patrons are those willing to take chances on people who are not only passionate about everything they do in life, but also intrinsically motivated and possess the moxie to flourish in their own ways.

This is my favorite business book. Primarily because not only does it have incredible ideas and a great attitude, the ideas are direct and easy to execute. For example, living by dice:

Feeling overwhelmed with everything you need to do this year? Want to break old habits, get out of a rut, or change your daily routine? Live by dice! Here’s how:

I love this strategy praised by Atari founder Nolan Bushnell. He didn’t invent the strategy, but it’s the reason he wrote my favorite business book of all time, Finding The Next Steve Jobs.

I bought this book because, although am not in a tech industry, I do work in Silicon Valley. I am always looking for insights into the people I deal with. Many books ( with the exception of Steve Jobs biography) have been very boring.
Not so with Nolan Bushnell's book. FIVE STARS!
Mr. Bushnell has written a well crafted and fascinating look into a world few of us know. Each chapter is a "sound bite"...short (2-3 pages) but packed with interesting facts about companies we all are familiar with.
Not only that, the very subject of of creativity begs to be explored. And, apparently Mr.Bushnell, has dedicated much of his life to finding creative individuals, much like himself, and opening doors for them to explore their dreams and our present and future.
I bought this book for my three administrators.
I would hope anyone involved with creative people will pick up this book. We seem to have lost the deep and abiding respect, hope and faith in the creative individual.
It is so good to know that there are powerful people like Mr. Bushnell who are also ethical, empathetic, in touch with humanity and humorous!
Buy this book!

If you want to study accomplishment, someone once told me, don't look only at the creative individual's life and choices. Look at the person's parents' background, because those people likely established an environment that permitted (if not inspired) the freedom to think differently. (Which is not to say that parents get the credit, but rather that they enabled the creativity, intentionally or otherwise.) If that's so, then it also makes sense to look at the attitudes of creative people's mentors, too -- and top on the list has to be Nolan Bushnell.

I think Bushnell is less-well-known to younger techies and entrepreneurs, and that's a damned shame. He founded and/or ran several companies that blazed new paths and did the unexpected, most prominently Atari and Chuck E Cheese -- as well as quite a few that didn't succeed, about which he is more candid than most. That alone would make his business advice worth listening to.

In this context, however, Bushnell is the most interesting (or marketable?) because of his impact on the young Steve Jobs, when Jobs (and then Woz) came to work at Atari. Bushnell saw Jobs' skills (and his weaknesses, too) and took the kid under his wing, creating a lifelong relationship in which they clearly inspired one another. And, as Bushnell writes, "The truth is that very few companies would hire Steve, even today. Why? Because he was an outlier. To most potential employers, he'd just seem like a jerk in bad clothing. And yet a jerk in bad clothing can be exactly the right guy to give your company the highest market capitalization in the world."

In this book, therefore, Bushnell shares snippets of advice -- he calls them "pongs" -- that can help a business identify and foster the creative talent within the organization. Most are short chapters with both anecdotes and specific suggestions, making them easily consumable, a little at time, for people with busy lives (doing creative things, I assume). There's advice on everything from hiring interviews to finding creatives (via Twitter!) to "instituting a degree of anarchy" to requiring risk (and "rewarding turkeys").

So, for example, Bushnell suggests one way to make it harder for a company to say No is to make people responsible for their criticism, because those with the most authority in a go/no-go decision "tend to be the ones who can analyze it least intelligently." One way, he says, is to set a rule that objections must be written down. For one thing, it forces the critic to be specific: "If the worst part of an idea is its cost, writing down actual numbers forces people to be more precise," Bushnell says, and it lets the idea's creator rebut or investigate the options.

The pongs make for outstanding reading, but I reluctantly withhold a fifth star because I'm not completely sure who will read this book. Certainly it's not the people whom we would agree NEED to read it, such as all the "We've always done it this way" bean-counter-led organizations that... well, I'm sure you've worked for a few of them, too. If you're trapped in one of those businesses, trying to break out, I worry that you'll just get depressed. The book is great reading for businesspeople who already are thinking in terms of fostering creativity, but I wonder how much of the advice will be really NEW.

I absolutely enjoyed the book -- as much for the geeky nostalgia about what it took to create a gaming company in the 70s and 80s, when microcomputers were spawning a revolution. I think some of his ideas are great, and I hope your company adopts them. But even if it doesn't, you'll enjoy reading this.

Many books of this type can make for heavy reading but this title from Nolan Bushnell is an entertaining, inspirational and informative read.

Lots of anecdotes intermingled with some sound and down to earth advice and this isn't just a book for those wanting to hire the best talent. There is plenty here to inspire everyone from budding entrepreneurs to those that are wanting to get more fulfillment out of life.

Bushnell has always been a visionary and often decades ahead of his time. This book sheds some light on his often crazy but always exciting world. Anyone with a passing interest in Atari, Bushnell and his many other ventures will enjoy this too.

The book's split up into nice short chapters focussing on an aspect of a company, affirms what we all us bitter corporate drones suspected all along, and then throws in a few anecdotes.
Sorry, that sounds harsher than I meant. It's enjoyable bite-sized reading covering the thoughts of Nolan Bushnell - just doesn't have a lot to do with Steve Jobs. Thinking about it, I think I've pulled that fifth star off entirely on that basis - would have been improved if Nolan had just written his autobiography.

The language is easy and the book is short. Each page does not contain a lot of text. The book is filled with useful ideas and anecdotes, such as what to ask on interviews and what your company should be like to attract creative talents. I see a lot of companies apply the same ideas presented in the book when marketing itself to students in my university. I had the pleasure of meeting Nolan Bushnell recently. The guy is exactly as warm and relaxed as he appears in this book. Great but short read. Recommended for talents and recruiters.

Well written, interesting read. I didn't have any specific purpose for reading this book other than general interest. Would recommend anyone to read; even if they are not directly involved with the employment of others.

An excellenk book and shows the tricks of the trade on how to be a good manager and how to run a very sucessful business.

Highly recommend for anyone wanting to know more about the legend Steve Jobs but also what makes Nolan Bushnell tick as well. Has some great tips on not only how to employ creative people but also how to be more creative yourself.

That's all! Worth your time if you value creativity within your business. Incredible insight into a great leader managing the maverick Jobs. Inspirational!

I had the chance to listen to an Interview with Nolan Bushnell to learn that he was the father of video games.

So on the credibility level, hiring the young Steve Jobs, founding Atari and still being in business after all these years made me believe he may have something to teach about creativity.

The book is a good investment as long as you commit to act on something and this what Mr. Bushnell is proposing.

Never seen any text before with such variety of damn good advice in a way that makes acting in your business so intuitive and embarrassingly simple. Quite incredible.