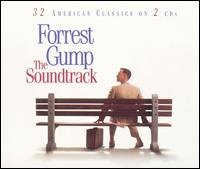 View on Amazon
I am 66 years old and this movie and this soundtrack is my life. You almost certainly have seen Forest Gump and are probably thinking about buying this album because, like me, you love the movie. Well, you won't be disappointed. The album begins with Elvis singing Hound Dog, and continues through some of the most memorable music of the 60s and 70s. I anticipate listening to this album again and again.

Bought this as a gift for my sister as a Christmas gift. I already knew what the album consisted of, as did she. She didn't own it yet, so I KNEW this would be the perfect gift! I'd buy a copy for myself just to jam out to! I think this review can be summed up shortly with the following: It contains classic rock from a few decades. CCR being my favorite! What can't you love?! I'd imagine that MOST people buying this album, or considering buying it, already know what to expect. My suggestion, if you DON'T know anything about this movie, and for some reason want the soundtrack before hand or at the same time, listen to this album in its entirety first! It pumps me up, hopefully it does the same for some of you!

60s music has always put me in a better mood (as does anything relating to the 60s). This album is jam-packed with tons of great classic songs from the 60s and 70s. I wish that they could have put The Doors and Jimi Hendrix songs that were actually featured in the movie on this soundtrack. I have bought so many copies of this record and really cherish it as my favorite soundtrack of all time. I leave it in my car to listen to when driving.

I love this so so much. I grew up in the 60's, and this makes me want to dance, or take a road trip. I can't say enough good things about this CD. I LOVED Forrest Gump, and Lt.Dan!

Product advertised as new, but no wrapper on the package. When opened, one of the CD’s was not attached. I haven’t listened yet.

Absolute most favorite movie sound track of all times. There are many movie soundtracks - but how many span 3 decades? This one does. Great for leaving in the car for long trips.

Even though I have some of these songs on CD or vinyl, it's nice to have them in one collection.
I think my favorites from this set would be "Raindrops Keep Falling On My Head," "What The World Needs Now" and "Let's Get Together."
As other reviewers have stated, it would be nice to have all the songs from the film included in this set. But, I suppose the owners of the publishing rights and or the performance rights wouldn't allow them to be included.
BTW, I've never cared much for the film, though the soundtrack is excellent.
When all is said and done this is a great set with very good sound quality, all at a fabulous Amazon price.

Good album, with some great songs. Originally I bought the CD in a charity shop, and have it in the car. Bought it for the tracks, not really on account of the film. Thought my Dad would like it, so bought this as a Birthday present. He really likes it.

Having caught Forrest Gump on telly recently, I loved hearing the music again and decided to buy the album.

There are some real classics from the 60s and 70s but I hadn't appreciated how many less well-known(and Iin my opinion 'less good') songs were on the album. I do find myself fast forwarding through certain songs if I'm honest.

A good buy overall but not the absolute classic I was expecting. Look at the song list carefully before deciding whether it's for you.

The best 60's music. Some great tracks from a brilliant film.

A fan will enjoy without doubt

What a fantastic soundtrack!! So many hits!! Timeless classic, i'm only young and in my mid 20's and I love nearly every track on this CD, its fantastic! and a really great homage to the movie!

Listened to this CD at a friend's house. Loved it so much I ordered a copy. Double CD, all my fav tracks. Great compilation.

Looked at the list of tunes played and as it was cheap bought the CD. All tracks are by American bands and I thought the first CD was better than the 2nd CD. It was a good price and well worth the money.

It's fine, but why oh why isn't All Along The Watchtower on it?