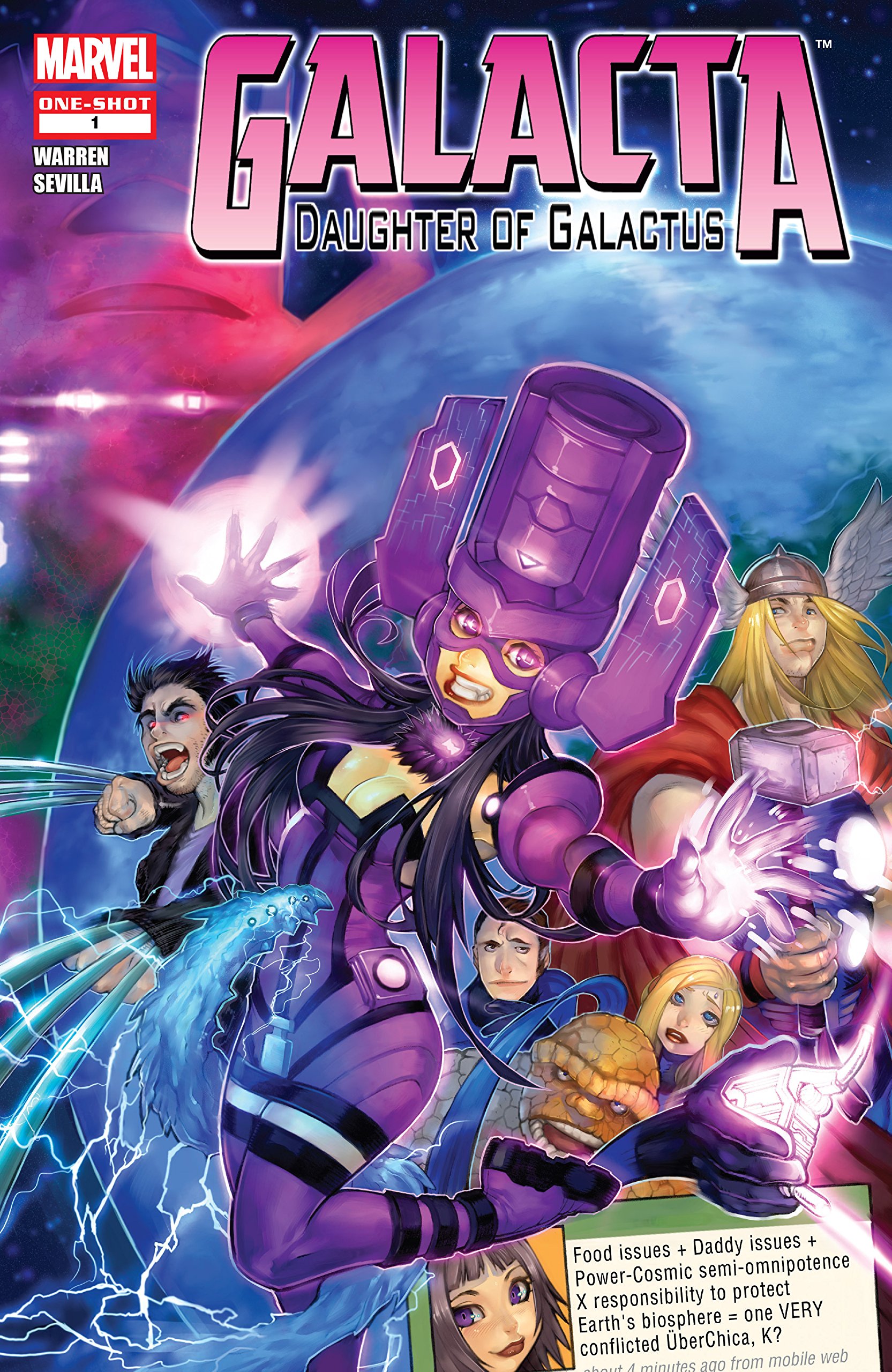 By: Adam Warren and Hector Sevilla

Galactus is the terror of the universe, devouring planets and destroying civilizations as he goes -- and a father to a growing daughter! Meet GALI, daughter of the infamous planet-eater GALACTUS! Unlike her father, Gali has formed an affection for the planet Earth, and does her best to subsist only on invasive alien life-forms...but when her cosmic hunger begins growing out of control, can she hold herself back from a deadly binge? Featuring WOLVERINE, THOR, and the FANTASTIC FOUR!
View on Amazon
If you are a gourmand with occasional gastric disagreements and a hunger for the metaphysical (like myself), you’ll find Galacta’s never ending quest to satisfy her appetite - along with the ethical treatment of lower life forms - absolutely entertaining!
Warning: A large, nay, brobdignagian vocabulary is required to follow our heroine’s internal dialogue, which for any regular devourer of typical Marvel Comics dialogue should be a snap! Galacta is sort of the Casper the Friendly Ghost of world devourers, trying not to follow in the footsteps of her amoral, indifferent old man and be a help to we denizens of the big, blue, biosphere when certain Weapon X-es, Nordic Deities, and Outstanding Quartets are otherwise occupied.
She’s the hero Earth deserves, but not what it needs right now. So we’ll be ignorant of her. Because she can take it, because she’s not a hero. She is a silent guardian, a watchful protector, a... uh, Garishly Purple Knight.
P.S. It has been brought to my attention that Galacta isn’t a part of “official” Marvel continuity, which is a shame, because I bet she would kick some serious ass in “Infinity War.”

This fantastic fantasy of Galacta, Goddess of Space, totally blows away everything "cosmic" we've seen in comics since Kirby. Indeed, Warren's use of The King's mythology proves to be as good as any issue of THE ETERNALS or FF from back in the day. I can't praise this comic enough, especially the innovative use of Twitter. awesome on every level.

I wish that there was definitely more to the story.
Love all of Adam Warren's work , but I think that some of the stories are tragically cut short. His voluptuous vocabulary and exquisite artwork always makes for a delightful read .

A fun read. I hope to see this character appear in more comics. Really beautiful art as well in this issue.