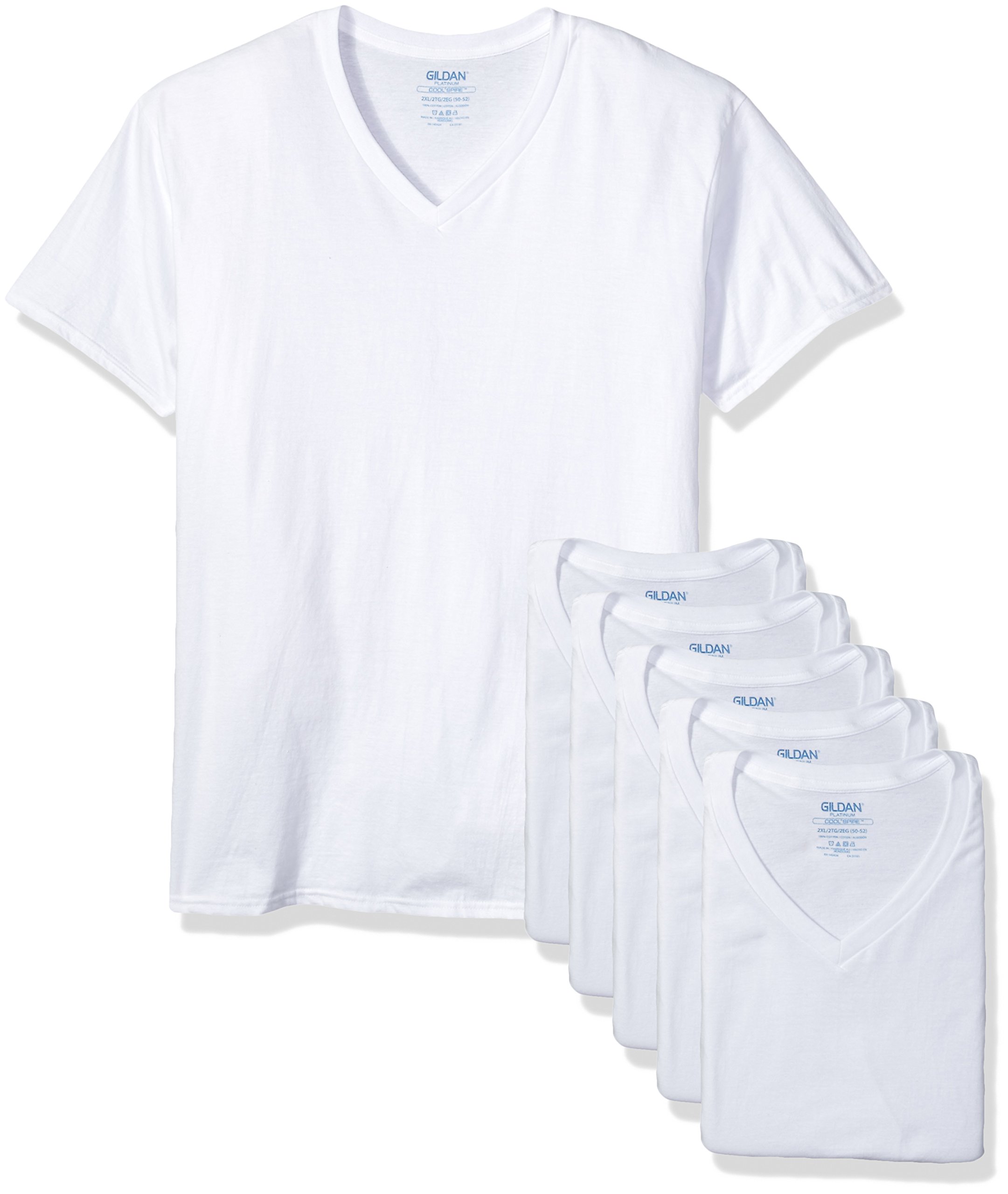 View on Amazon
Material is very nice. Good weight and feel. The stitching is better than a couple of other brands that I own. The length is what I like best. I wear t-shirts in the winter months and it feels comfortable to have my undershirt securely tucked. I could probably get by with the large size being a 44 regular but the extra room in the arm holes makes it easier to move around while sleeping. I bought a six pack and each has been through the wash twice and no changes in shape or feel has been noticed.

These particular shirts are made with the technology that keeps you cool. I wear white T-shirt’s like a uniform. Everyday. These shirts are nice thicker than the cheaper ones. The V-neck holds it shape.
The XL version has a 8” long short sleeve. This is great if you are a woman with flabby arms. I can not find Women’s T-shirt’s that look decent and have a longer than 2 inch cap sleeve.
I am a size 12 to 14. Smaller in the top than the bottom.

I was hesitant buying these do to the described shrinkage, but my normal size is between medium and large so I purchased large expecting some shrinkage. Sure enough they shrank after the first washing for a perfect fit.
Material is comfortable and cool. The V is reinforced and does not sag. The V is also the perfect depth, not up to the collar but not too deep.
A perfect top with a pair of shorts in the summer.

I love these Gildan t-shirts. I bought them to wear against my skin with layering to work outside. They wash up well and maintain their shape, perhaps shrinking a bit but still fitting well. The cotton is thicker and softer than your average t-shirt, they are tagless, which I love as tags make me itch! I wash them with a small amount of bleach to keep them bright white and clean, which I thought would degrade the cotton, but they are standing up to the bleach very well so far. Will definitely purchase again!

I bought these for myself since apparently it's impossible to find plain white cotton undershirts for women. I chose these since they have a v-neck and aren't super long. Some reviewers said these were on the thin side but that was what I was going for. I wanted something light to go under my sweaters. They did shrink a bit the first time I washed them, but I was expecting that. The neckline is a little 'close', if that makes sense, so it showed around my neck above the sweater more than I wanted, but it wasn't unattractive. I do wish the V was deeper on these though. I wear a women's size Large and ordered the mediums and they fit just right after washing. If these end up not lasting well I'll amend my review, but they seem fine for now.

I've been buying Gildan V Neck T shirts for years, usually a couple packages a year as they are a staple of my simple style. They used to be as good if not superior to all the other brands, minimal shrinkage, think v neck collar, and very reasonably priced. However the regular v necks had gone down in quality in the past year, and the necks began to bacon after a couple of washes. So i tried the Platinum series thinking maybe they'd be better, no luck they're actually worse! The material is softer, but the fabric is very thin and after 2-3 washes 3 of the 6 shirts have ripped collars so they are completely unwearable, unless you are going for the old Hulk Hogan dramatic rip them off your chest kinda vibe. Avoid all Gildan T shirts, the quality is better in a Gas Station bought T shirt!

No other shirt has stood up to my hubbys job for so long. He works road construction, construction, heavy lifting, emergency on call and I can rely on these shirts to do the job right by him.

These are my husband's favorite t-shirts. They fit accurate to size. When washed we don't dry them in the dryer. He's 5'7' and about 230 and we bought the XL and there is plenty of belly room :-) and length. He works outside every day in the summer and they are nice and cool without being see through. I don't ever see him tug or pull on them like other t's. He still uses a Gildan t we bought 8 years ago; so they last.