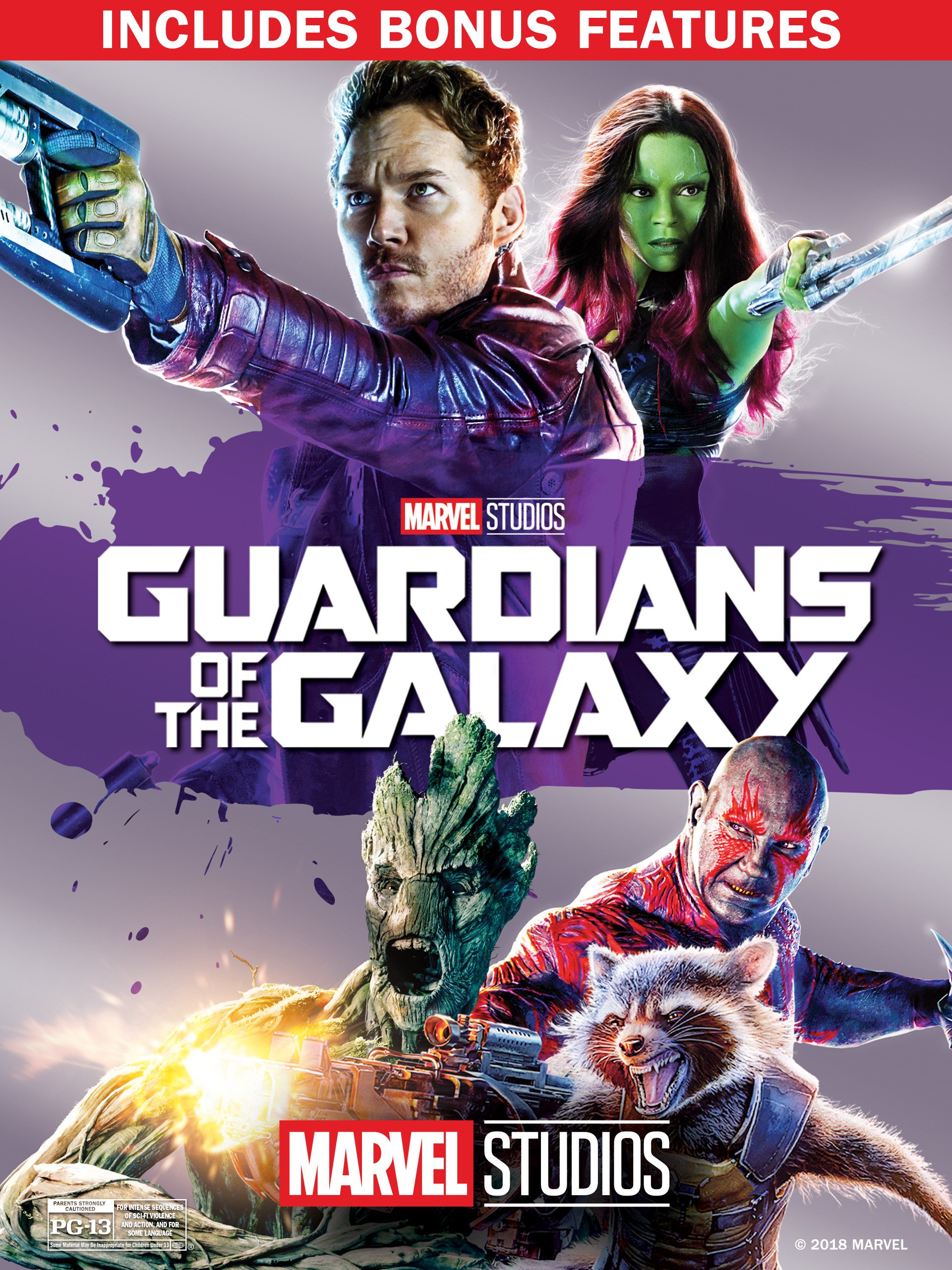 Guardians of the Galaxy (Plus Bonus Features) 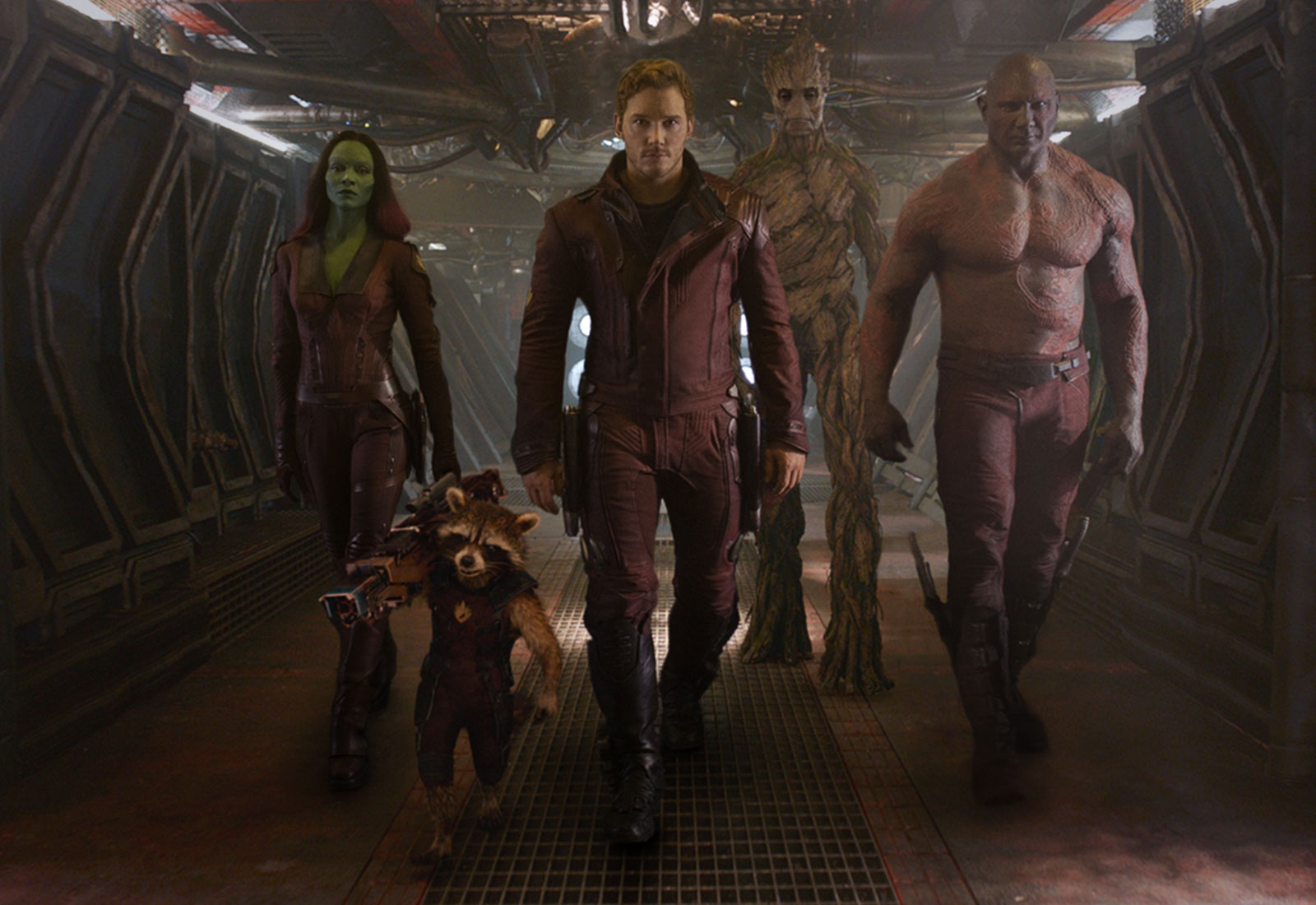 View on Amazon
This is a new set of Marvel heroes that I was not familiar with until my kids briefed me and bought me up to speed.

With so many different things happening at Marvel nowadays - it is hard to tell when (what year) things are happening. Take the new Marvel Avenger "Civil War" movie for example. In this very recent movie - Spider Man is a real young kid still in high school with pimples and awful costume.
What about all the previous (and terrific) Spider-Man Movies where he is in college? Who knows? Who cares? We're selling tickets here babe!

I believe "Guardians" is set in our time period, same as the Avengers (Why? because "Star Lord" is taken from Earth as a young child in our time period and is NOT delivered to his Dad as he was supposed to be), but now he is grown up and lives in a distant part of the galaxy. Great characters, great adventure, great directing, funny and serious all at one time. A great film with a lot of fun. Get snacks and a blanket and watch the whole thing! Crank up the sound, Great soundtrack. Highly recommended.

The Guardians of the Galaxy would be a first for the Marvel Cinematic Universe (MCU), it was an action comedy. This would later be taken up by the Ant Man series, but this was the first of its kind.

It also featured James Gunn as director and co-writer. That was an interesting choice because he’d mostly been known for horror movies like the fantastic Slither. He and Nicole Perlman, his writing partner created a great cast of characters and a story featuring the creation of the Guardians of the Galaxy, their nemesis Ronan the Accuser from the Kree world, and brought Thanos more into the MCU by introducing his two daughters Gamora and Nebula.

The movie would also be notable because it featured an amazing soundtrack of songs mostly from the 1970s. This was also a first. That was apparent right from the start when Peter Quill lands on the planet Morag to steal an Infinity Stone and starts singing along to Come and Get Your Love by Redbone. The song has an infectious beat and a singalong chorus that immediately caught the audience’s attention. That would be followed by hit after hit Like the Five Stairsteps’ O-o-h Child at the climax of the battle with Ronan.

Anyway, the story focuses upon Ronan working for Thanos to recover an Infinity Stone. That goes wrong right off the bat when Quill steals it. Thanos’ daughter Gamora is then sent to recover it. Quill is in trouble as well as he double crosses his own group the Reavers, which brings in Rocket and Groot who are bounty hunters. They all get thrown in prison where they meet Drax the Destroyer. Together they form the Guardians who want to thwart Ronan and Thanos’ plans for the Infinity Stone. They go from planet to planet introducing new characters like the Collector and new world’s such as Xandar the home of the Nova Corps, which are all famous from Marvel comics.

There’s plenty of action such as the huge battle at the end versus Ronan, as well as comedy. Quill and Rocket for instance are always at the center of jokes like when the former flips off the Nova Corps saying he was sorry he didn’t know how his finger worked. Drax plays the straight man but makes hilarious remarks as well such as when he says nothing goes over his head because his reflexes are so fast he would catch it. Groot who only says “I am Groot” also gets in on the laughs.

Overall, this was some rip roaring fun, and would set the stage for future Marvel movies with both the characters, and its use of comedy. Definitely at the top end of MCU releases.

I'm not normally a fan of superhero movies, but I love sci-fi so everyone kept recommending that I watch this movie...

The movie was not good. Literally the only good line in the movie is when the tree says "I am Groot". I am really struggling here to write a review though because there was not much from the movie that I found noteworthy to even comment on - good or bad.

I cannot remember when I loved a movie this much!!! The characters are all very different but relate well to each other, and it's just plain funny as hell. There is a little bit of romance, but not very much, and not in any great detail (no physical stuff you have to make the kids look away from). There are a bunch of battles, but nothing particularly gory or bloody. In fact, all of the battles are accompanied by great music, and not even battle-type music - just great music. (The whole soundtrack is great - lots of old songs brought back. I have no idea who chose all of these tracks, but they're none you'd expect and yet they just add SO much to the movie!!) A few curses (I think they said "sh_t" a couple of times?) but they DON'T drop the "F-bomb" and they even just say "A-holes" instead of "as_holes". We watched it with our 9-year-old, who really hates violence and can get freaked out by scary or creepy things (she didn't even like the bad guys in Pinocchio, although that was a few years ago), and she loved it!

With over 20 films now in the official Marvel Cinematic Universe story line, it is an impossible and pointless task to pick favorites, at least for me. Still, from the moment the original 'Guardians Of The Galaxy' hit the cinema it found a soft spot in my heart that I imagine it will occupy forever. I love everything about this film - the characters, the cast, the loving attention to the original comics, the sweet and subtle tributes to the olden days of Marvel, the humor, the action, and on and on and on. 'GOTG' is a perfect film that holds up no matter how many times I watch it, which already has been a whole bunch. The Blu-Ray release is nice too, with some cool extra features.

Although Guardians of the Galaxy (2014) has a few moments of corniness, generally speaking it's an hilarious, action-filled fantasy/sci-fi with convincing visual effects, whacky characters, and a great script. The cast is surprisingly star-studded with Chris Pratt in the leading role and arguably more well known stars taking back seats. For example, Glenn Close and Benicio Del Toro have minor roles. Nathan Fillion of Serenity-fame merely does the voice-over of a minor player, and Josh Brolin, as Thanos, is uncredited. Speaking of voice-overs, what a pity that only the voice of Vin Diesel, a favourite of mine, was used in this lively escapade. It seems such a waste and it surprised me that he wasn't cast in the role of hunky Drax (one of the good guys) which went to Dave Bautista, a WWE champion. Having said that, 6ft 4in Bautista, didn't disappoint. Quill is one of the few Earthlings in this 'out there' extravaganza, and the variety of aliens runs from a hard-nosed green woman (Zoe Saldana), to blue men (Michael Rooker), to a magical and daunting tree giant called Groot (voice of Vin Diesel) and an irascible raccoon-like invention called Rocket (voice of Bradley Cooper). My favourites in this movie though, and I expect they are the favourites of many, are the nutty duo: Groot and Rocket. They could have a show of their own. Groot can only say 'I Am Groot' which means that Vin Diesel wouldn't have needed to spend hours learning his lines. I wonder how much he got paid? Rocket was a psychiatrist's dream or nightmare, and the funniest of the lot. Talk about complex. Ronan kept reminding me of Tom Hiddleston's Loki, except that Ronan's lugging around a great big (Thor-like) hammer. And, if all that isn't enough, the Guardians of the Galaxy soundtrack is a treat.

So, what's not to like? Guardians of the Galaxy is such fun. I saw it some time ago and decided to buy the BluRay because I have just ordered the Guardians of the Galaxy II, and I wanted to watch the first one first, if you get my meaning. The video and audio of the BluRay are excellent. The movie has such vibrant colours with equally vibrant characters. The soundtrack is superb, especially if you enjoy the early 70s music, and I do, and it fits the tone of the movie perfectly. The character, Peter Quill, who likes to be called Star Lord (Chris Pratt) loves his ancient Sony Walkman and the cassette he plays upon it. He will burst into dance at the strangest of times. Don't we all???

The BluRay comes with the usual extra which shows us how the movie was made. I would suggest that anyone new to the movie should watch the extra afterwards as, for me, finding out how special effects are done can spoil a movie for me. Who wants to visualise wires or a blue screen while trying to be mentally transported in the movie's world?

If your spirits are low and you need a bit of a lift and your sense of humour remains intact, check it out. Oh, and it's not for young children.

Another entertaining, smart and slickly presented offering in the Marvel canon.

A relatively minor group of misfits (as opposed to better-known groups of misfits like the X-Men and Avengers) become the unlikely heroes in preventing a powerful artefact from falling into the hands of a seriously bad inter-galactic warlord; its all very tongue-in-cheek stuff with a wonderfully cheesy 80s pop music sound track and lots of CGI, but it is wildly entertaining. Karen Gillan (of Dr. Who) is unrecognisable as the sadistic Nebula.

Well worth checking out, this is a good couple of hours of escapist entertainment.
The DVD has no worthwhile extras beyond a deleted scene and some trailers, but there are subtitles and audio description.

This film was quite funny and violent at the same time, the casting of Vin diesel as Groot was weird to say the least, a question remained unanswered at the end of the film though in how does our hero become part alien in the first place? as this isn't revealed unless I missed it, but a great typical Marvel film and a promise of more to come of the Guardians I think the cameo appearances of Stan Lee in Marvel films is hilarious I cannot help but look for him, reminiscent of the Old Alfred Hitchcock films. I will not give the plot away in case it detracts others from watching it, you just have to see it to make up your own mind, but for what its worth it was a great film, the only reason I give it 4 stars is because I would have liked to know about the origins of our Hero before the film got underway in full swing and not leave any questions unanswered.