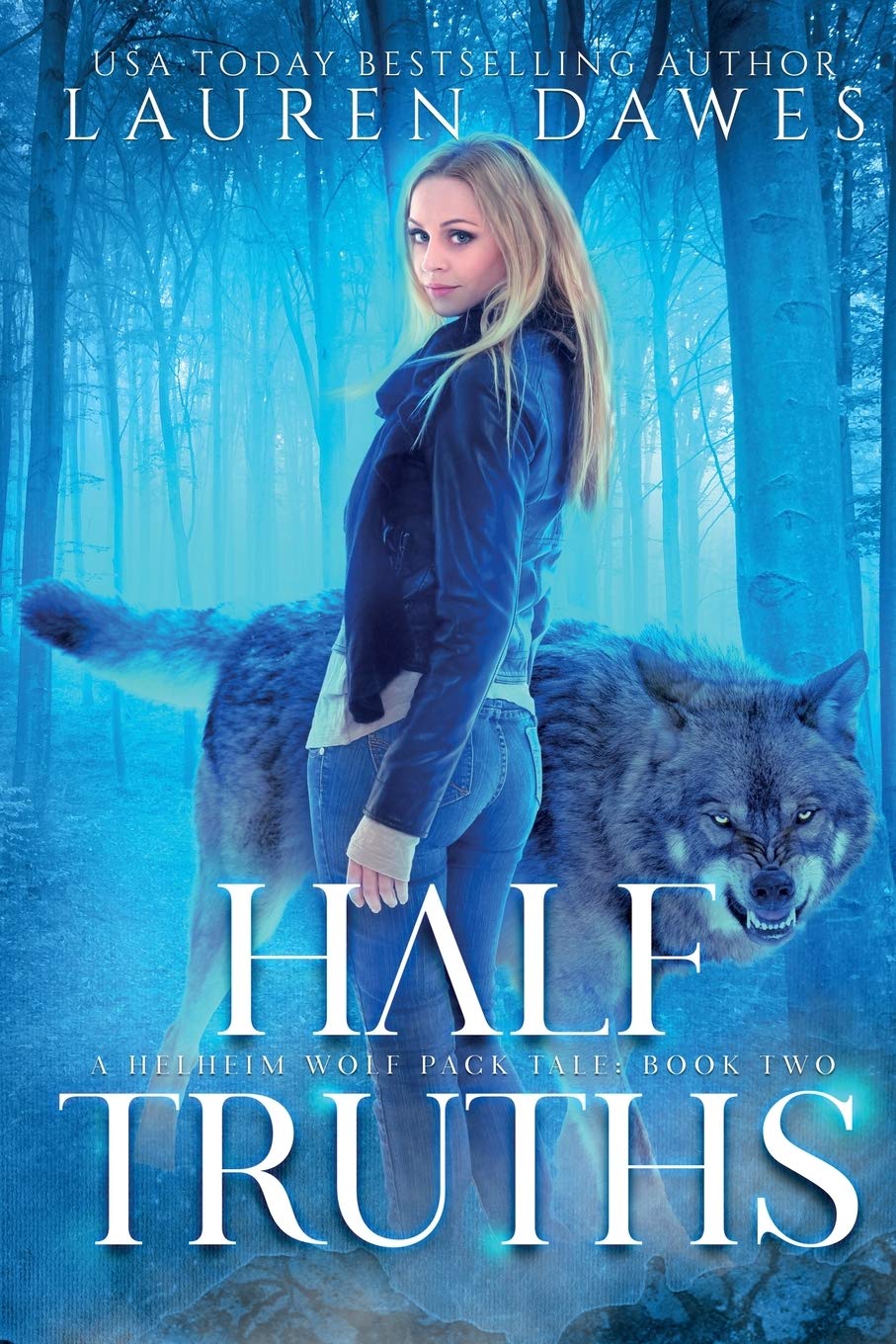 Half Truths: A Helheim Wolf Pack Tale (Half Blood Series)

HE NEEDS TO FIND THE KILLERThe Helheim pack is still reeling from the abduction of their alpha's mate. While Rhett begins the search to get her back, Vaile is distracted by a series of brutal murders at the local Goth club which have all the hallmarks of a vampire killer. Left to put the bloody pieces of the puzzle back together, he can’t help but think there is some sort of connection between the two occurrences...SHE DEMANDS TO KNOW HIS SECRETLarissa Grey has just been assigned to the service of Vaile Wolfe, an intimidating, dominating detective who scares people to get his way. When the case they're working starts getting strange, she demands answers from her partner but discovers only more questions. Will she be able to find the answers, or will Vaile prevent her from finding out the truth?
View on Amazon
'Half Truths' is the second book in Lauren Dawes 'Half Blood' series. I was a fan of book one 'Half Blood', so I immediately went and bought this one! I just had to find out what was going to happen with the Helheim pack. I'm so glad I did! Lauren can spin a wonderful tale full of drama and suspense! I don't know if the many points of views will throw people off, but it's actually one of my favorite kind of writing styles! (Yup, I've said this before haven't I?) I love to be in the heads of everyone! But no worries folks, Lauren knows how to weave the story so when you're all done reading her book it's complete! Minus the cliffhangers she tortures her readers with! *grins*

In 'Half Truths' we are thrown into brutal murder mysteries that keep happening at the local Goth club. With Vaile Wolfe trying to solve these homicides and feeling the pressures from the police force ON TOP of dealing with the pack and the abduction of the alpha's mate, it's no wonder he's strung so tight when the alluring Larissa Grey is around!!

Don't be fooled, among the murder mayhem, the reconnaissance of the abduction, Lauren manages to throw some romance in there! Will Vaile succumb to Larissa and allow himself to love? Will he remain in his secretive world where vampires and werewolves run wild? Will Larissa give up on questioning her partner Vaile? Will she accept his odd ways and short temper fuse? Or will she just throw all caution out the window for a chance at love? Find out! Pick up the beginning of this story with 'Half Blood' and then head over quick to answer all the questions above by reading 'Half Truths' OR take your chance at winning them below!! I, on the other hand can't wait to get my hands on 'Half Life' book 3!! I give this book my thumbs up!

An awesome story line, and another one of those books I just couldn't put down :-)
I little bit raunch like the grey books and a little twilighty. But all in all I loved it

Lauren Dawes delivers again! The Helheim Pack has enough to worry about right now with their Alpha’s mate has been kidnapped but on top of that there are murders happening and all signs indicate that the Vampires are causing them.
Werewolf and Detective Vaile is on the case with his new Partner Larissa Grey. Vaile isn’t an easy man to work with but there is chemistry between him and Larissa. And she’s not intimidated by him. Attracted to… Yes, Intimidated… No. Will they find the killer before time runs out?
With a Werewolf war on the horizon for the last Half Blood who can help the Packs with more female births what will happen? Will the Helheim Pack be able to save the Alpha’s Mate? Will they keep the Half Blood in their pack? To find out you’ll have to read this wonderful book!

"Half Truths" picks up where "Half Blood" leaves off and is just as amazing. This book will not disappoint. Indi now realizing who and what she is has accepted it, but just because she has accepted it doesn't mean it's meant to be. Rhett is fighting to save Indi's life but it seems like the one thing she needs is the thing that's putting her life in danger. Will Rhett and the help of the pack be able to save Indi's life before it is too late?
Indi's life isn't the only life that is in jeopardy, the pack must also figure out a way to save Eaton, the mate of Antain, the leader of the pack who was kidnapped in exchange for Indi. Will the pack be able to rescue Eaton with giving Indi up to Marcus who plans to use her until she dies? The question becomes are they really willing to sacrifice Indi to save Eaton, and what happens if Indi dies before the exchange can or will be made? Will the pack be able to keep Indi alive, rescue Eaton and find out who is killing humans and sending a message?
Will they be able to keep everything from the seer who will willingly give Indi to Marcus if it seems like the pack in unable to protect her? As a plan is set in motion to rescue Eaton from Marcus and unexpected visitor is willing to give them the answers they are seeking but nothing comes free. Will the trust of the stranger lead to betrayal? Relationships will form, loyalties will be tested, bonds will be broken and what started out as a rescue mission will lead to a full blown war? The question is who will be on whose side and who will be standing when the war is over?

i had the first book as a freebie and enjoyed it so bought the next one. Its a good mix of characters we can empathise with - they are "real" people not flat one dimensional as so often in books. they have faults and problems and their actions are shaped by what has happened in the past. I was glad to see so much of Vaile in this one - he's a brooding charcter in book one but lightens up in this and we see another side to him. Rhett - its clear from book one how he feels about Indi and he's so careful with her as she's such a vulnerable person due to her past. Its lovely to see their romance gradually unfold.
there are some good "nasty" characters here too - all books need a counterpart to the heros...some of the actions of the "nasties" are a bit stomach churing but fit with the characters portrayed so its not just gratuitous violence. the sex scenes are well done too - not too icky and twee, not overdone and in your face but just good honest hot sex. I'd be happy to re read and to read more from these characters

Half Truths picks up were Half Blood finishes. Another great read, loved it. I think its worth mentioning the plot is quiet dark, and some readers might find parts of the book disturbing. Can't wait to read the final part,

I got Half Blood as a free Kindle download and read it in a few days. I was left wanting more so purchased Half Truths which continues the story of the Helheim Wolf Pack. I can't wait for the next instalment! The story is gripping and I couldn't get enough of it.