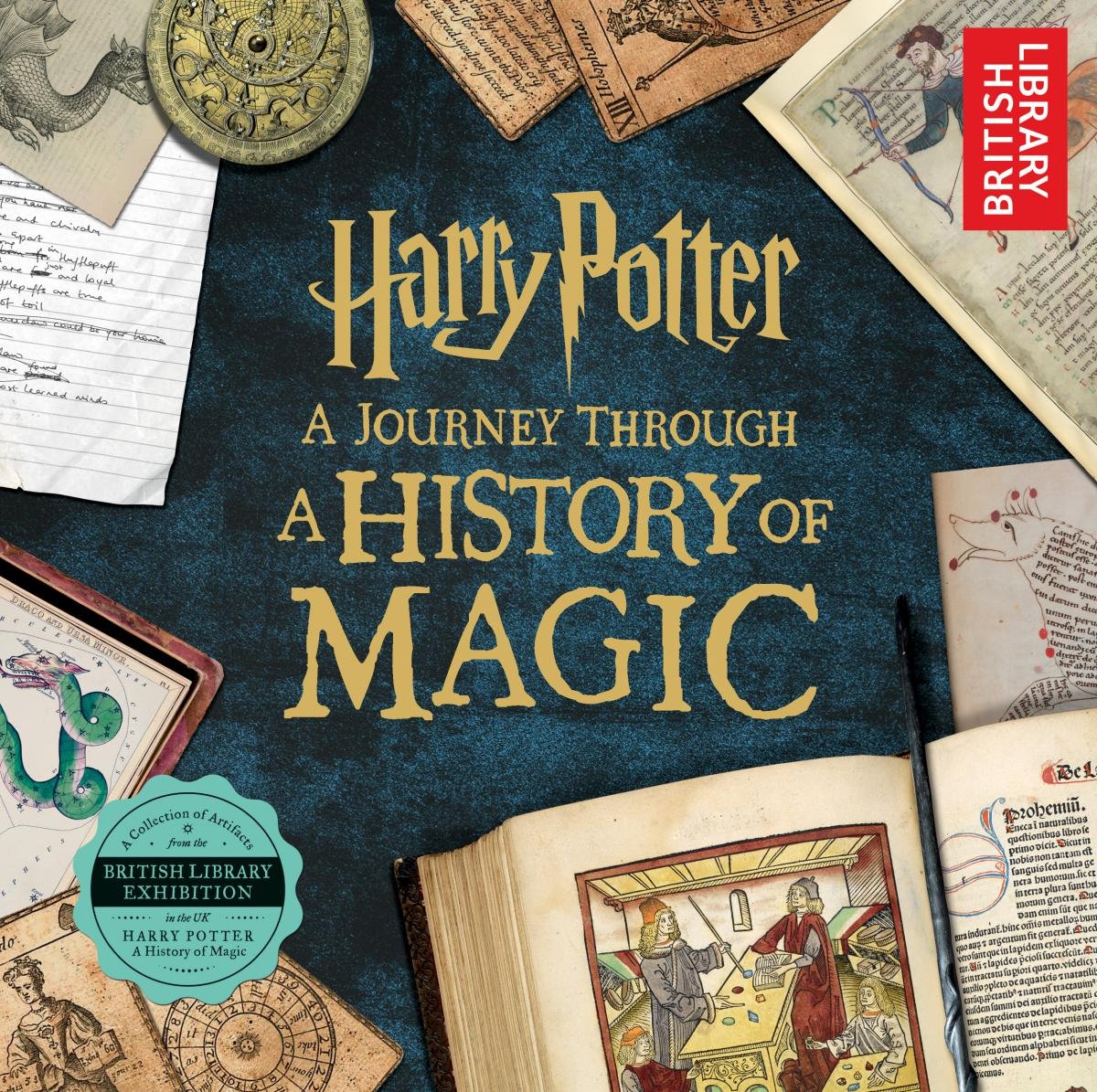 Harry Potter: A Journey Through a History of Magic

As the British Library unveils a very special new exhibition in the UK, Harry Potter: A History of Magic, readers everywhere are invited on an enchanting journey through the Hogwarts curriculum, from Care of Magical Creatures and Herbology to Defense Against the Dark Arts, Astronomy, and more in this book uncovering thousands of years of magical history. Prepare to be amazed by artifacts released from the archives of the British Library, unseen sketches and manuscript pages from J.K. Rowling, and incredible illustrations from artist Jim Kay. Discover the truth behind the origins of the Philosopher’s Stone, monstrous dragons, and troublesome trolls; examine real-life wands and find out what actually makes a mandrake scream; pore over remarkable pages from da Vinci’s notebook; and discover the oldest atlas of the night sky. Carefully curated by the British Library and full of extraordinary treasures from all over the world, this is an unforgettable journey exploring the history of the magic at the heart of the Harry Potter stories.
View on Amazon
I love everything about the world of Harry Potter! I have hardbacks of each of the original series (some also in Spanish!), have each of the standalone "text books" originally released, the play script and screenplay and have purchased all of the illustrated editions as they have been released and have started reading them to my 2-year old. Suffice it to say... I'm a huge fan and not afraid to spend some money to own more stuff from this world.

That being said, I will admit that when I first saw this... I hesitated buying a copy. For starters, it's listed as "paperback" and I questioned the quality/durability. Also, I really wasn't sure what to expect as this is a collection of stuff, but not really anything NEW by Rowling.

**But when I saw this in a local store, I was impressed by the THICK CARDSTOCK cover and decided that I really DID want to have it added to my collection. It's much more durable than a "paperback" book and is more on par with the quality of a "coffee table" book, so don't be turned off by this detail!***

I was not disappointed! It's colorful, it has both familiar stuff (artwork from the illustrated editions) plus brand new things (handwritten notes, sketches and many other things from Rowling). I've re-read through all of the original stuff some many times (and still love it every time) but it was to have something "new" to enjoy for the first time again.

Nice! This book is similar to the other History of Magic book, but it's more fun and visual so probably intended for a younger, more Harry Potter-focused fan and less on the adult museum goer. But I have both and I like them both; there's plenty of separate information. This book focuses more on the curriculum at Hogwarts, how JK Rowling created it, and various aspects of real life that can be found in it. It's really fun and interesting!

You can see my review for the "adult" History of Magic exhibit companion book here: https://www.amazon.com/review/R3LWC0UZD37I1R/ref=cm_cr_srp_d_rdp_perm?ie=UTF8

I don’t care who you are or what degrees you have, I promise this book will tell you something you didn’t know about the subjects taught at Hogwarts!

I gave this book to my 7 year old grandson just before he left for NY for Christmas. He spent the afternoon I gave it to him reading it, even when we went out to lunch, reading it in the car and at the restaurant. He even took it to NY with him. It is a beautifully made book, full of fascinating information. You don't have to be a Harry Potter nerd to appreciate it. I like it so much I'm ordering another one for myself.

It's a really cool activity book for kids who love the books and movies. I didn't know it was a juvenile version of the UK hardback edition however. It is missing essays, lot's of information, and artifacts when you compare this to the Bloomsbury hardback edition (I purchased it after getting this copy in the mail). Moral of the story, it's a great book for kids, but not adults.

I fond this book interesting, thought it is not what I expected. I expected something along the lines of fun "textbooks" like "Fantastic Beasts and Where to Find Them" or "Quidditch through the Ages". Instead, this is a somewhat more serious, academic by the British Library that looks at the Harry Potter books and inspiration for various ideas and characters. The book includes examples of Rowling's first drafts of different books, background on "magical herbs" and background on historic "witches and wizards" etc. Some of the discussion and short essays goes back into the origins of various "magical elements" into the 15 and 1600s. There is also some original artwork of the various characters.

As an avid Harry Potter fan, I continue to be impressed by J.K. Rowling's created world. This book gives readers a deeper understanding of the magic involved in the story. The book is filled with illustrations by Jim Kay and J.K. Rowling as well as unseen excerpts from Rowling's manuscripts.
This book explores how the Series got its start, the core subjects required of Hogwarts students, character profiles, a history of Hogwarts, and so much more!
A must read for all Harry Potter fans!

I was quite fascinated with this book and was enlightened with everything that bad to do with magic. I enjoyed very much reading about the beginnings of such a wonderful book of Harry Potter. There may actually be some (very few) who didn't like the books.
WHO?? Since the first book came out, I have been grabbing anything that has do with the books & the magic. I haven't been bored.
The research Rowling must of bad to go through to write such a wonderful & enjoyable series... It definitely opened my mind and
what a great way of learning..which I hope will never stop. I hope this beautiful author never stops writing...

Amazing gift for the younger, older and wizard members of the family. Richly illustrated and filled to the breaking point with facts - from both the wizard and muggle world alike. Highly recommended!

This is such a fantastic book, the perfect accompaniment to the tv documentary shown before Christmas, my ten year old Harry Potter mad daughter loved the programme and then studied this book night after night. A few weeks on and she still keeps going back to it. The pictures and illustrations included are incredible, jk rowlings initial sketch of hogwarts she sent to her publishers; hand written pages from her original manuscript, just wonderful. We are now planning a trip to the British Library to see the exhibition.

This is a curious book, as everything about Harry Potter is curious. But it is a very good and much appreciated book as well. It takes you through the history of magic. In that sense it is actually a great reference for those interested in historical topics and myths. The book makes an ideal great gift for muggles and budding wizards alike that want to solidify their base knowledge about magic. The 144 page book is filled with colourful illustrations and art. So it is all very nicely presented. This makes it a great addition to our daughter’s growing Harry potter collection and book shelf in particular.

The book addresses ancients myths and mythical creatures, astronomers, mermaids, unicorns, medieval witchcraft and alchemy - all of course tying into to Harry’s world of magic. There is a whole background story about dragons and brooms. Then there are detailed explanations about Hogwarts classes like the Defence Against the Dark Arts, Divination and Herbs. Furthermore there are sketches and manuscripts from the grand wizard herself; J.K Rowling as well. So it is really a very rich, complete book.

The book includes interactive instruction to create your own ‘magical ‘ potion like invisible ink as well. My Potter-crazed daughter wrote me a letter with this and I can confirm the text was absolutely invisible, as the included picture demonstrates.

Note that it it was produced along with the British Library to support the exhibition Harry Potter: A History of Magic, we sadly missed that. However there was also a tv documentary that can be found online.