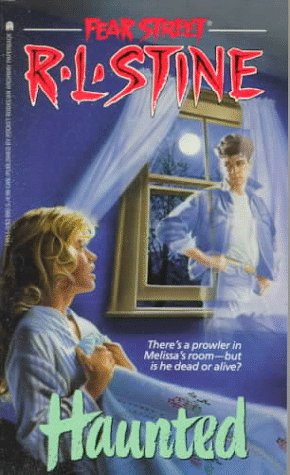 Following a terrifying visit to her bedroom window by the Fear Street prowler, Melissa discovers that she is being victimized by an unseen spirit that wants to cause her harm
View on Amazon
This has always been one of my favorite books. Quick read and fun.

My favorite! And her father has carry a gun in the drawer! :)

I grow up reading R.L. Stine books. Even though I am 20yrs old, I still read his books. Haunted is my favorite. It is my favorite because it is a sad and romantic story. This book has excitement, love, death, fear all in one. I have read this book 4 times and I plan on reading it again.

R.L Stine typically doesn't write many books on ghosts in the Fear Street series so this was unique among these novels. It kept me intrigued the whole book.

Melissa is being haunted by ghost who claims she killed him. But surely this is something she would remember, right? First the Fear Street Prowler breaking into houses on Fear Street to steal stuff, and now this? Poor Melissa.

I really loved the premise of this book! I was just as confused as Melissa throughout the whole thing! I could not figure out why Paul, the ghost, was claiming the Melissa killed him when she did not remember. Amnesia, maybe? Nope!

And while researching the dead ghost boy and deaths in Shadyside, Melissa actually finds nothing. No dead teenagers, not a single one. In Shadyside. I was like, “Umm excuse me but this is book 7 in the Fear Street series, there have definitely been deaths!” Especially those of teenagers! Lol. So yeah, this mystery was just bananas! But I liked it!

Oh, one part towards the beginning of the book, Melissa’s car was being controlled by, well, not her. It was very Cataluna Chronicles , which I’ve been dying to read lately! And if you don’t understand that reference, Christine, basically. Lol. It was pretty cool. I also love the movie Christine, but that’s beside the point.

Anyway, overall, I really loved this one! First of all I loved that there was an actual ghost on Fear Street! Second, the mystery surrounding Paul’s death and why he was haunting Melissa... so much YES! The plot twist was insane and I loved it! This is why I love this series!

---
"Fear Street is by far the most interesting street in Shadyside, she thought."
---

That’s one way of putting it. Lol.