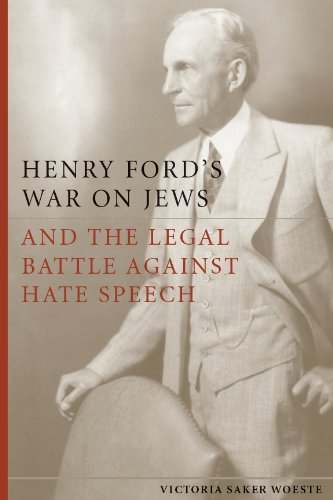 Henry Ford is remembered in American lore as the ultimate entrepreneur—the man who invented assembly-line manufacturing and made automobiles affordable. Largely forgotten is his side career as a publisher of antisemitic propaganda. This is the story of Ford's ownership of the Dearborn Independent, his involvement in the defamatory articles it ran, and the two Jewish lawyers, Aaron Sapiro and Louis Marshall, who each tried to stop Ford's war.
In 1927, the case of Sapiro v. Ford transfixed the nation. In order to end the embarrassing litigation, Ford apologized for the one thing he would never have lost on in court: the offense of hate speech.
Using never-before-discovered evidence from archives and private family collections, this study reveals the depth of Ford's involvement in every aspect of this case and explains why Jewish civil rights lawyers and religious leaders were deeply divided over how to handle Ford.
View on Amazon
A good review of legal issues and developments regarding personal and class libels. The author balanced pretty well the legal-technical issues with the societal issues related to Henry Ford and his misinformed prejudices, as well as his outright lies about his moral and legal responsibilities for the misguided and untrue anti-Semitic rants

This book is a well written and important reminder that racial and religious bigotry and hatred in the US has long and often obscure roots. And because the Ford media machine has endeavored to excuse Henry Ford's simple minded antisemitism, it is doubly important that books of this kind find as wide an audience as possible. There are efforts to produce a film that captures keeps this story alive but, not surprisingly, it is being met with resistance.

Excellent book reviewing the history of Henry Ford's anti-Semitism, his publication of the Dearborn Independent, and the resulting trial and its aftermath. Authoritatively researched and published by the American Bar Association.

When is Victoria Saker Woeste and Stanford University Press going to turn their concern with "hate speech" on some lesser cartoon cut-out than the long-dead Henry Ford? What about the contemporary rhetorical war on goyim, in which Woeste and fellow thought cops invest exactly zero interest and concern? Take for example the Lakewood, New Jersey yeshiva volume, "Romemut Yisrael Ufarashat Hagalut" ("Jewish Superiority and the Question of Exile"). Quoting from its contents: "The Jew by his source and in his very essence is entirely good. The goy, by his source and in his very essence, is completely evil. This is not simply a matter of religious distinction, but rather of two completely different species." Does anti-goyimite racism qualify as hate speech that must be interdicted?

Let us consider another charming book that has had a considerable influence over the Israeli army, "Torat Hamelech: Dinei Nefashot Bein Yisrael Le'Amim" ("The King's Torah: Laws of Life and Death between Jews and the Nations"). This book contains 230 pages on the halachic perspective on the killing of gentiles. The authors assert that "The prohibition `Thou Shalt Not Murder' applies only `to a Jew who kills a Jew." Torat Hamelech was published by the Od Yosef Chai yeshiva. It has received wide dissemination and the enthusiastic endorsements of prominent rabbis. At the entrance to Moriah, a large Israeli bookstore just yards from the Western Wall, copies of "Torat Hamelech" were displayed with children's books and halachic commentaries. The store manager, who identified himself only as Motti, said the tome has sold "excellently." Other Israeli stores carrying the book include Robinson Books, a well-known, mostly secular bookshop in a hip Tel Aviv shopping district; Pomeranz Bookseller, a major Judaic book emporium near the Ben Yehuda mall in downtown Jerusalem, and Felhendler, a religious store on the main artery of secular Rehovot, home of the Weizmann Institute. Prominent religious figures wrote letters of endorsement that preface the book. This is happening now. It is not a relic of the Great Depression era, like Ford's material.

Here is another quote from "Torat Hamelech": "In any situation in which a non-Jew's presence endangers Jewish lives, the non-Jew may be killed even if he is a righteous Gentile and not at all guilty for the situation that has been created," the authors state. Other books of this tenor include the Lubavitcher-sponsored "Baruch Hagever," which praises the mass murderer who slaughtered 40 Palestinians in Hebron in 1994, and Kahane's "They Must Go," which describes the entire Arab population as "malignant." We could go on, citing, in context (as Woeste does with Ford), quotes from such hallowed texts as the Talmud Bavli, Mishneh Torah, Tanya, and Kitzur Shulchan Aruch. Hopefully, what we have furnished herein will suffice.

When will see a book about the "Rabbis' War on Goyim and the Battle Against Hate Speech"? We could not find "Torat Hamelech" or "Romemut Yisrael Ufarashat Hagalut" in your book decrying hate speech. Why? You seem to be branding a prominent goy (Ford) with the Mark of Cain, while turning a blind eye to the hate speech of Right wing Orthodox rabbis who have signficant influence over the Israeli occupation troops who hold the lives of Palestinians in their hands, at the present time. When will we witness righteous outrage concerning the on-going hate speech associated with the War on Goyim?

[Hoffman is the author of "Judaism Discovered."]