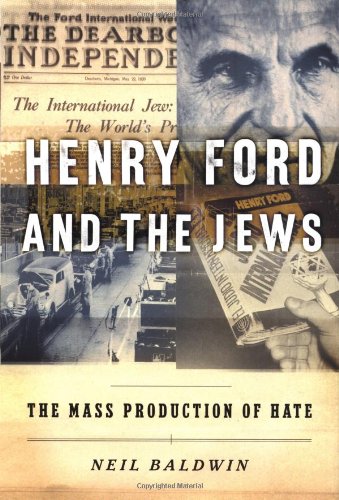 Henry Ford and the Jews: The Mass Production of Hate

Describes how Henry Ford promoted his anti-Semitic views in "The Dearborn Independent" and other publications and examines the response of the Jewish community in America as well as Ford's impact on the spread of anti-Semitism in Europe before World War II.
View on Amazon
I’m sick of a lifetime of hearing what a great American hero Henry Ford was supposed to be. He was a fanatical hater of Jews and he spread anti-Semitic propaganda with the same zealousness of Joseph Goebbels.

Neil Baldwin wrote about Thomas Edison, and in the process came upon conversations he had had with Ford during the 19-teens, during which Ford would go on random rants more characteristic of an older man and a man with much less stature, rants that relied on invisible characterizations of “Jews” being referred to as the singular. Edison for his part was not concerned with Ford’s comments or the Jews.
Central to Ford’s lifelong battles of words against the conspiratorial lenders of money and creators of war was his elementary education textbook, McGuffey’s Reader. As Lincoln had never met a black person until he was an adult, and then only a few until his move to Washington, the country around Detroit did not furnish Ford with any Jews until he was established by the mass production of his cars. Instead, the “country” instilled Ford with an agrarian pride that linked him to farmers and farm equipment, and against bankers. Baldwin points to Ford’s ancestry and childhood as an ideological foundation from which with all his success, at one point the richest man in the world, he never strayed. He never grew out of the textbook teachings of the usurer Shylock. The Dearborn Independent was the voice of his scapegoating, although only rarely did Ford even have personal reason to cry foul. Unlike Gerald L.K. Smith and Father Coughlin and William Dudley Pelley, his anti-Semitism was not politically motivated and not sensationalism. The Protocols of the Elders of Zion seemed to him more like a hobby born out of a child’s boredom.
Rabbi Leo Franklin had a tumultuous but long relationship with Ford. Rosika Schwimmer’s Peace Mission is a side note of history that displays the complexity of pacifism when it allies enemies. At least to Ford, she was an enemy and barely worth condescending. Albert Kahn was a good token Jew for Ford, a close associate and talented architect he could always point to when attacked by the likes of Aaron Sapiro, who took Ford to court and ultimately forced the “Henry Ford” image to retract the Independent as much as possible. Baldwin considers the words signed by Ford to be written by public relations handlers. Leading up to and during World War II, the real Ford was making the same grumbling pronouncements as he had in the company of Edison. Like Charles Lindbergh, Ford also accepted, while in Germany after the most obvious attacks on German Jews, the Grand Cross of the German Eagle. On page 285 it is noted that Thomas J. Watson of IBM “returned [his metal] in 1940” while Lindbergh received his as a total surprise only a few months later.
There is some information on the Bund, not enough to connect Ford as the Father of German-American activism, but there are more heroes involved: Julius Rosenwald, Herman Bernstein, Sapiro, Schwimmer, Judah Magnes, Jacob Schiff and Louis Marshall.

As advertised, thank you!

a lot of things i did not know well done

This book by Baldwin gave a searing history of automobile icon
Henry Ford.Baldwin very capably shows one of the pioneers of
American industry to be devoutly anti-semite.Ford himself was the
financier behind a anti-Jewish newspaper that was published in
Michigan.Ford was a fan of Adolph Hitler. Hitler had a portrait of Ford on thew wall in his office.Henry Ford received an award
from Hitler and showed up in person to receive it bringing with him many guests.Charles Linberg and Thomas Watson of IBM declined
the same award.Ford was also able to sell Ford products to the
Nazis receiving a monopoly on the Nazi vehicle market in the military.This book is packed with documented of Henry Ford's
anti-semite activities.Read this you will become better informed.
This is a good book. Buy it.

Coming from the UK it took me awhile to get into this book as I was unfamiliar with many of the characters.However once I got to around page 80 I was totally engrossed by this portrayal of a man who was the essence of evil.Being a very rich man he was able to inflict his racist views on the public and then deny them when it suited his purpose.No wonder Hitler gave him a medal.From one monster to another.