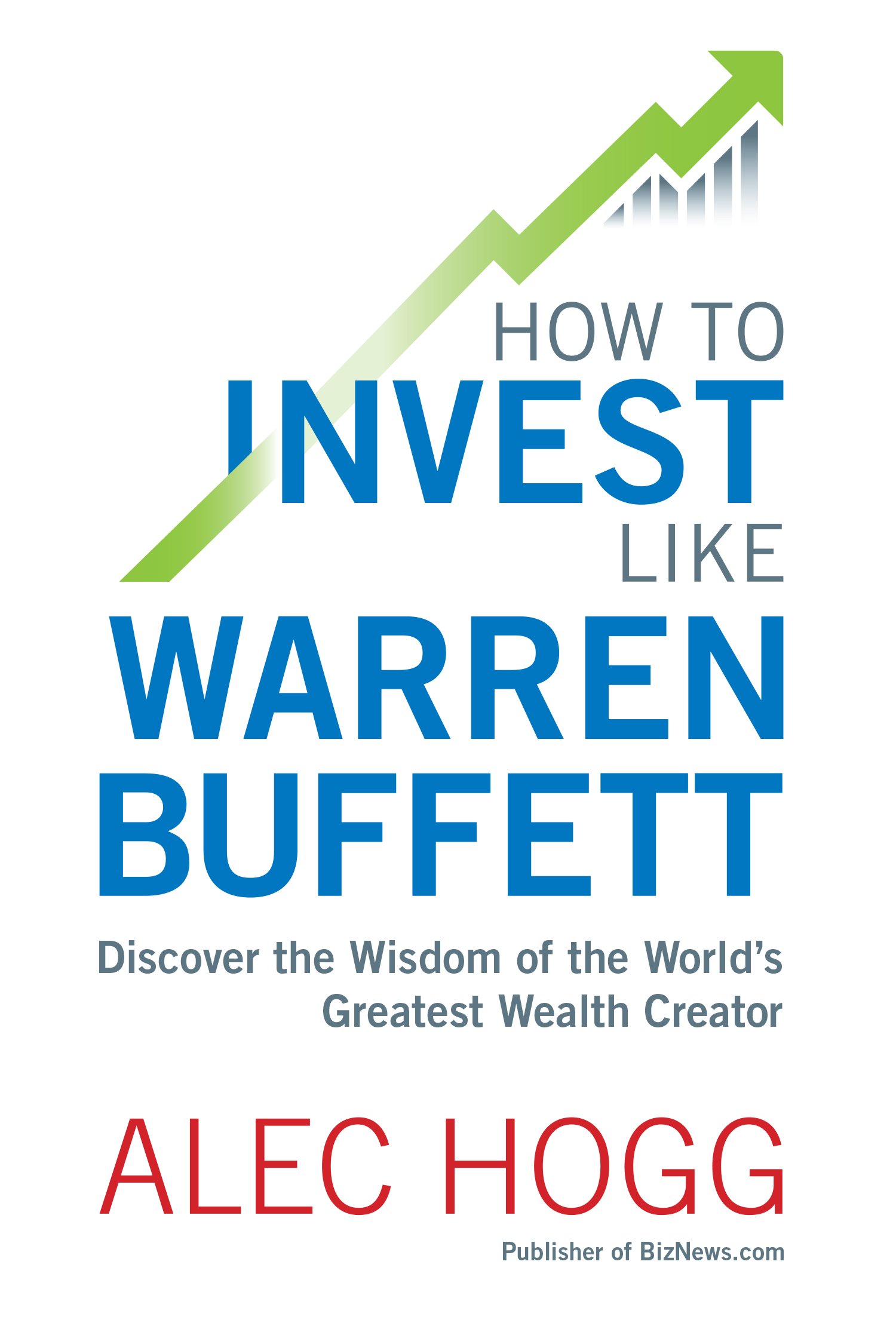 How To Invest Like Warren Buffett: Discover the Wisdom of the World's Greatest Wealth Creator

The 2016 Global Edition of "How To Invest Like Warren Buffett" is now available on Amazon Kindle. Discover the wisdom of Warren Buffett, the world's greatest wealth creator.

"We don’t play trends - they just don’t mean that much. There is too much money to be made year to year rather than waiting for the big trends to impose themselves." Warren Buffett.

Alec Hogg is a veteran financial journalist and publisher of BizNews.com. He is seasoned pilgrim to Warren Buffett's annual Berkshire Hathaway Annual General Meeting, and an expert on the investment philosophy of Warren Buffett.

What's Inside This Book

Learn about the young Buffett and what shaped him into an investment master.

2. Benjamin Graham – and the Book that Changed Buffett’s Life

What 'cigar-butt' investing is all about and how Graham, and subsequently Buffett applied it to investments.

4. The Margin of Safety

Buffett believes that the margin of safety is the "the central concept of investment". What is it and how it works.

By letting Mr Market influence decisions, you are allowing yourself to be affected by what Buffett describes as ‘other peoples’ errors of judgment’.

How Buffett turned a poor investment in textile company Berkshire Hathaway into an investment house that is now the fifth most valuable company in the world.

There are two amazing businesses that, together with the insurance operations, have been the backbone of the Berkshire business over many years. One is a chocolates-in-the-box operation called See’s Candy, which Buffett calls "a prototype of a dream business", the other is motor insurance business GEICO.

Buffett’s "Big Four" stocks account for 60 per cent of the value of the company’s $117-billion share portfolio. Read about each of the "Big Four".

Buffett’s belief is that private investors have an advantage over professionals – as long as they do their homework. Found out why.

Many of Buffett’s principles are common sense. Provided you follow his investment guidelines, anyone with even a sliver of life experience will be able to avoid many of the share market pitfalls.

Buffett refuses to call markets. Well, most of the time. The exceptions are so rare they’re worth revisiting.

13. Katharine Graham and the Media Business

Buffett's thoughts, insights and wisdom about the Media Business.

For many, the real appeal of Warren Buffett stretches far beyond his sensible, wealth-creating investment advice. Buffett’s accessibility, humility and old-fashioned Midwest values make him a role model for millions of people around the world.

Buffett’s views on a range of subjects, from derivatives to acquisitions.
View on Amazon
A pretty comprehensive introduction to the way Warren Buffet invests. Reading good books on investing is one of the best ways to learn the craft and in this book Alec recommends a couple of them

Enjoyed this easy but insightful read!

An easy to read, excellent book. I have now invested in the stock market via a broker. Very excited.

A good read with lots of practical, common sense advice on investing in the stock market.

Do not be frightened off by the title. This is not yet another “How to become as rich as Buffett by following his investment secrets.”
This is a mature and thought-provoking book that highlights some important practices of the best investor on planet earth. These are practices that can be easily followed by any investor and that will at best improve your returns, and at least highlight the difference between being a speculator and an investor.
The book opens with a description of Buffett’s early life, education and career, as well as his capitalist tendencies that started at age six.
The impression many have of Buffett as a great stock-picker overlooks the fact that his wealth is not based on stock-picking, and that he doesn’t spend his days watching the boards to see movements from which he can take a quick advantage. His is the “get rich slow” scheme, which requires work – Buffett works seven days a week.
Early in his career Buffett learned a powerful, clarifying insight from his mentor, Benjamin Graham, that of the erratic Mr Market. The stock market is like a manic-depressive partner who will offer to buy your 50% share of the business for more than it is worth when he is manic, and sell his 50% for less than it is worth when he is depressed. Buffett’s method is to ignore Mr Market and focus only on the business itself.
No business gets percentage points better in a day or percentage points worse in a day. Those are the ravings of the manic-depressive, Mr Market.
A well run business with its solid business model and high quality management, will go through rough periods, but those will pass and not affect the value the business will achieve – over time. “Over time” is five years, anything less is not investing, it is speculating.
Buffett works hard at finding out how good a company really is, and flees from companies that mask their problems or mislead their shareholders. Recently he dumped his holdings in Tesco, the British supermarket chain, when it was revealed the management had lied about their financial state. Buffett lost $440m, but would not leave his money with a company that cannot be trusted to tell the truth to their shareholders.
Buffett reads company reports insatiably, and places great value on those that have a Chairman’s report written by the Chairman himself, and not the PR department. However, Buffett also listens to “the Scuttlebut” – the bucket on the old sailing ship that the sailors would gather around to drink water and gossip, much like the modern coffee machine. What are the people in the company saying about the company and the management? What are the competitors and customers saying about the company?
Buffett has a share portfolio of $117bn, (larger than the National Budget of South Africa), but just four listed companies make up 60% of that value. They are Wells Fargo, Coca Cola, American Express and IBM. The rest of his portfolio are unlisted companies, eight of which are big enough to qualify for the Fortune 500.
Many talk of “diversification” of a portfolio, and their rationale is that where some companies fail to perform, the others will compensate. Buffett’s view is to “put all your eggs in one basket, but watch that basket very carefully, and know what it is that you are buying.”
In this short and very readable book, the trusted Alec Hogg has pulled together some of the most important lessons that can be gleaned from Warren Buffett. Hogg has followed Buffett for years and has had personal exposure to the great man. Complemented by Hogg’s knowledge of the South African context he has produced a ‘must read’ - whether you invest directly in the market, or through advisors.
Readability Light +---- Serious
Insights High -+--- Low
Practical High -+--- Low

*Ian Mann of Gateways consults internationally on leadership and strategy and is the author of Strategy that Works.