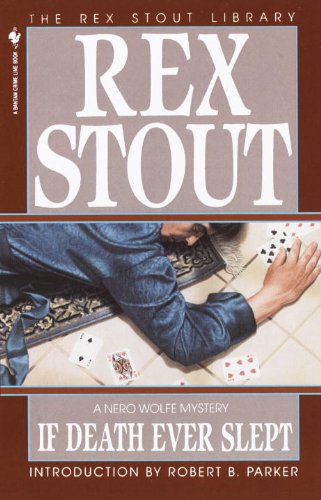 If Death Ever Slept (A Nero Wolfe Mystery Book 29)

Murder lurks in the wings of the sprawling Fifth Avenue penthouse of multimillionaire Otis Jarrell, who has just retained the incomparable Nero Wolfe on a case of the utmost confidentiality. But even the master detective cannot prevent tragedy when it inevitably arrives wielding Jarrell’s missing revolver. Soon a second victim meets his maker, and Wolfe must piece together the truth behind Jarrell’s scandalously ill-behaved family. And for one member of that charmed circle—a two-time killer sleeping the fitful sleep of the guilty—it could prove a deadly awakening.

Introduction by Robert B. Parker

“It is always a treat to read a Nero Wolfe mystery. The man has entered our folklore.”—The New York Times Book Review

A grand master of the form, Rex Stout is one of America’s greatest mystery writers, and his literary creation Nero Wolfe is one of the greatest fictional detectives of all time. Together, Stout and Wolfe have entertained—and puzzled—millions of mystery fans around the world. Now, with his perambulatory man-about-town, Archie Goodwin, the arrogant, gourmandizing, sedentary sleuth is back in the original seventy-three cases of crime and detection written by the inimitable master himself, Rex Stout.
View on Amazon
"If Death Ever Slept" (1957) begins with a standoff between Archie and his large, stubborn, brilliant boss, Nero Wolfe:

"It would not be strictly true to say that Wolfe and I were not speaking that Monday morning in May."

Archie knows Wolfe hates cases involving marital squabbles, but his unpredictable boss accepts a $10,000 retainer from millionaire, Otis Jared, who wants Wolfe to dig up some dirt on his daughter-in-law. Archie is packed off to the millionaire's luxurious condo to pose as his new secretary. The former secretary was fired when Otis Jared suspected him of passing business secrets to his daughter-in-law, 'The Snake.' Archie settles down in the midst of the Jareds, their spouses, and various employees. Nothing much is detected until a couple of murders later. Then Wolfe kicks into full gear, returns Otis Jared's retainer, and sends his full crew out onto the hunt.

I never would have guessed I'd be reading mysteries starring two male chauvinist detectives, one pompous, the other cocky. However, I love these Nero Wolfe mysteries by Rex Stout and have read all of them at least twice. "If Death Ever Slept" is not my favorite because of its large and sometimes confusing cast of characters, and but Nero and Archie and their bête noire, Inspector Cramer are all in top form.

There is a interesting article by Rex Stout at book's end, taken from the 4/19/1963 edition of 'Life' magazine, entitled "Why Nero Wolfe Likes Orchids."

I feel like an absolute crumb, finding any fault at all with a Rex Stout original Nero Wolfe novel. Like an elementary school art teacher blasting a Rembrandt. Or maybe a commercial jingle composer criticizing Beethoven. But while this book carried along from the beginning like any of the previous Stout Wolfe tomes I'd read, the build up to the grand finale having gotten you prepared for another grand slam of ratiocinationary brilliance on the part of our intrepid detective, the actual popping of the cork produced all the effect of a ten -day -opened two litre bottle of Diet Coke. With Wolfe's office packed by one of the largest cast of characters that I can remember for a final reveal you knew that this was going to be a real barn-burner of an ending. And then, pfui! I knew two paragraphs into Wolfe's closing monologue who the killer was and I could not have been more disappointed. I won't spoil things by saying anything more, I simply wonder if anyone else sees things like I do, that the climax left them feeling rather deflated. I'd still recommend it to anyone who enjoys the rapport between Nero, Archie, Cramer and the usual suspects. If the journey is more important than the destination, I would have given five stars. I don't think that is true, especially in a mystery novel.

A classic Wolfe and Archie setup with a wealthy, belligerent client who already thinks he knows the culprit behind recent leaks of information from his company. We have all the usual characters, including Orrie, Saul and Fred and the ever-annoyed inspector Cramer. The sparring between Cramer and Wolfe is as enjoyable as ever. This is a great series and I highly recommend it to anyone who enjoys a good mystery. Sherlock and Watson with a heap of humor.

Archie doesn’t like Otis Jarrell, whose business methods are dubious and who makes unreasonable demands. But Jarrell is worth $30 million, so Archie tricks Wolfe into accepting the man’s $10,000 retainer.

Wolfe calls the Jarrell household “a hive of predators and parasites,” and that about sums it up. Archie goes undercover there without much success. Two murders later, it takes Wolfe’s brain, and all his operatives, to track down the murderer.

The solution of the crimes is a surprise but the real charm of these books is the predictability of the recurrent characters. We can count on Wolfe to tend his orchids four hours a day, and safeguard his mealtimes against interruptions, and put off work as long as possible. We can count on Archie’s irrepressible wisecracks and comically caustic observations. Fritz’s menus are always mouth-watering. Inspector Cramer is inevitably red faced and suppressing fury at Wolfe while chewing aggressively on an unlit cigar.

This Bantam Books edition has a nice introduction and Includes a fun article by Rex Stout on why Nero Wolfe likes orchids.

I gave this 3-stars because it is a Rex Stout/Nero Wolfe, which means good writing and witty dialogue. But this particular story/mystery was a huge disappointment, from slow beginning to obvious and anti-climatic ending.

Have Archie to pretend to be a secretary was a very strange. I couldn't really see him in that role. Everything was a odds to a normal Nero Wolfe. Still I love reading Nero Wolfe. . Recommended.

“If Death Ever Slept” is an amusing, ambient 1950’s mystery with an average plot. Alan Greene’s interactions with the Wolfe and the oval-faced snake make it worthwhile, but it isn’t Stout at his best.

Reading a Nero Wolfe mystery is like visiting with old and dear friends. The detective pair are, in my view, truly endearing people, who also happen to be excellent detectives. The pairing of the over-sensitive, over-intellectual Nero Wolfe with the good-looking, smart-talking, gun-wielding Archie Goodwin is pure genius. Some say that they remain the same throughout the entire series, and to some extent that is true, but their relationship shifts and changes, the bond between them growing ever deeper and stronger, until you can see a Damon-and-Pythias kind of friendship hiding beneath the continual friction. By the time this book takes place, that friendship is very well established, and there is therefore less tension in the book than in earlier stories in the series. As for the plot, Rex Stout's plots are always original and intriguing, well thought out, with no loose ends at the finish. I always enjoy the way he hides clues in plain sight. I relish Stout's mastery of the English language, as well. It is rare to find an author so well at home in his native tongue. If you have never read a Nero Wolfe book, I would recommend that you start earlier in the series, simply because it's such fun to watch those relationships developing over time. But, hey, start anywhere, and if you like classic mysteries, you will like Nero Wolfe.