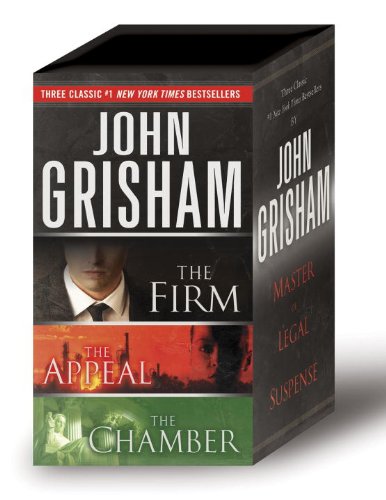 The #1 New York Times bestselling master of legal suspense, John Grisham has electrified readers with his white-knuckle narratives for more than two decades. In this boxed set are three of his classic thrillers: The Firm, the runaway hit that ignited his writing career, The Appeal, and The Chamber. These edge-of-your-seat novels show why John Grisham is—beyond a reasonable doubt—one of the most beloved authors of all time.

When Mitch McDeere signed on with Bendini, Lambert & Locke of Memphis, he thought that he and his beautiful wife, Abby, were on their way. The firm leased him a BMW, paid off his school loans, arranged a mortgage, and hired the McDeeres a decorator. Mitch should have remembered what his brother Ray—doing fifteen years in a Tennessee jail—already knew: You never get nothing for nothing. Now the FBI has the lowdown on Mitch’s firm and needs his help. Mitch is caught between a rock and a hard place, with no choice—if he wants to live.

In a crowded courtroom in Mississippi, a jury returns a shocking verdict against a chemical company accused of dumping toxic waste into a small town’s water supply, causing the worst “cancer cluster” in history. The company appeals to the Mississippi Supreme Court, whose nine justices will one day either approve the verdict—or reverse it. The chemical company is owned by a Wall Street predator named Carl Trudeau, and Mr. Trudeau is convinced the Court is not friendly enough to his interests. With judicial elections looming, he decides to try to purchase himself a seat on the Court. The cost is a few million dollars, a drop in the bucket for a billionaire like Mr. Trudeau. Through an intricate web of conspiracy and deceit, his political operatives recruit a young, unsuspecting candidate. They finance him, manipulate him, market him, and mold him into a potential Supreme Court justice. Their Supreme Court justice.

In Chicago’s top law firm, a young lawyer stands on the brink of a brilliant career. Now twenty-six-year-old Adam Hall is risking it all for a death-row killer and an impossible case: Sam Cayhall is a former Klansman and unrepentant racist facing the death penalty for a fatal bombing in 1967. Cayhall has run out of chances—except for one: a determined lawyer who just happens to be his grandson. While the executioners prepare the gas chamber, while the protesters gather, and while the TV cameras wait, Adam has only days, hours, minutes to save his client. For between the two men is a chasm of shame, family lies, and secrets—including the one secret that could save Sam Cayhall’s life . . . or cost Adam his.
View on Amazon