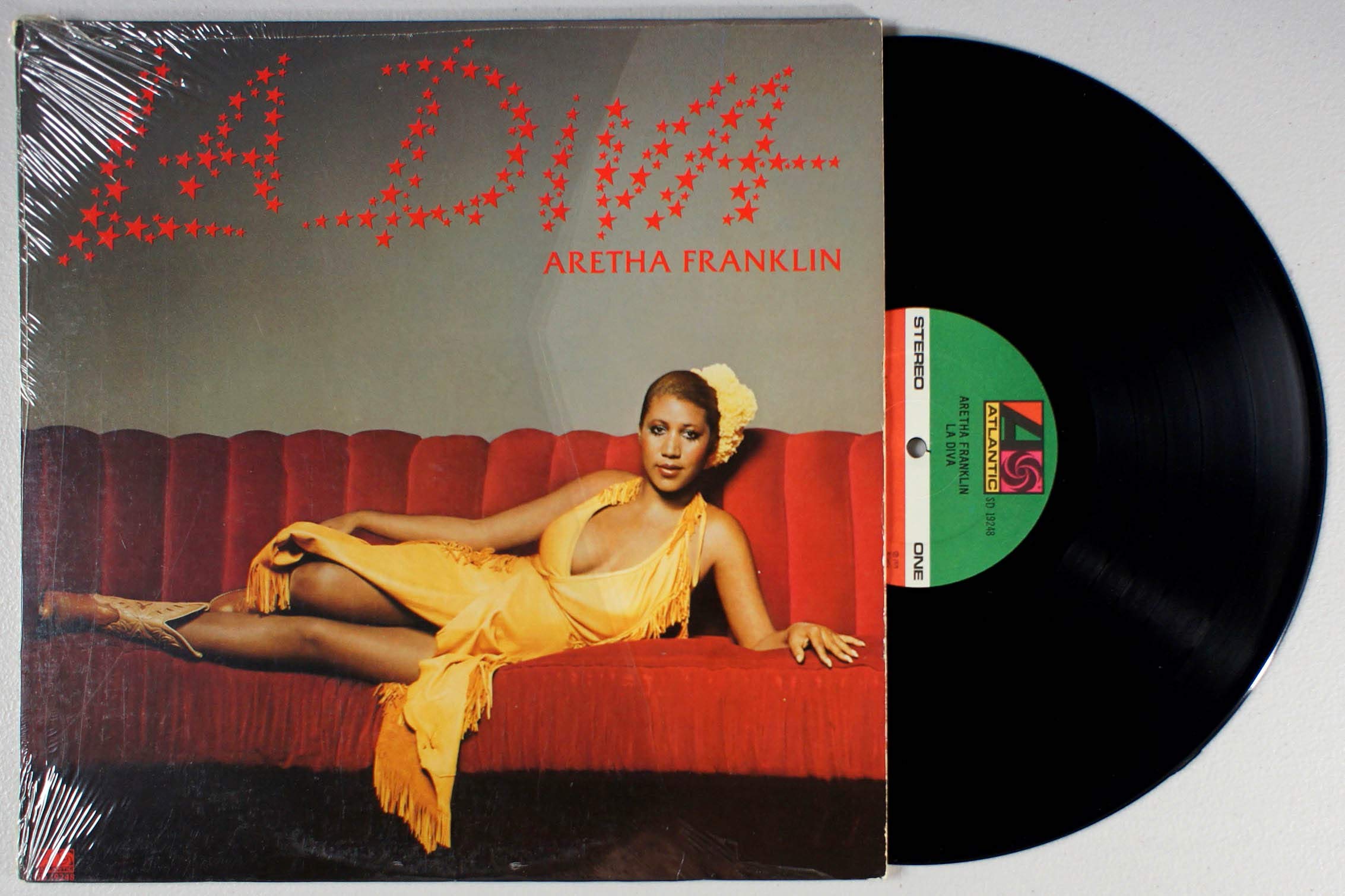 View on Amazon
This Aretha Franklin album was what my wife and I listened for the the best part of the first five years of our marriage. She owned it on an 8 track tape, and we even knew when the tracks would change. We LOVED that album. Our favorites were "What if I should ever need You?", "Half a Love", and "You brought me back to life again". It was especially played a lot around Christmas. We both had been through bad marriages, and it seemed like Aretha was talking right to us. I have a cassette of this album that I made from the 8 track, and have been diligently searching for the CD, which I just found out on your site does not exist. Oh well. I guess I'll just have to buy a used vinyl album and then get one of those album to CD converter units. By far, the best Aretha Franklin album EVER!

Aretha late 70''s at the top of her game in the recording studio yet not having commercial success during 70's disco era decided to mix current trend with a funky mix of what she does best, soaring up and down through a super-fine mix of varied songs a number being self-penned but all tracks completely brilliant, great album has something for everybody and being a life-long Aretha fan somehow this one got away from me until now, loving it completely and blown away by the magnificence of it all, music legend Van McCoy contributed greatly to artistic mastery of a collection any lover of Lady Soul will be enraptured and captivated by...Bonus tracks more greatness from a legend we sadly never will see the likes of again making this rarity a real keeper!
Review of BMG Import from Estonia 2008
HIGHLY RECOMMENDED

LA DIVA (Billboard #146 Albums Chart and #25 R&B Albums Chart) has been frequently maligned by the critics and and even more sadly, was her least commercially successful release on Atlantic Records. In a major cover story, Interview Magazine noted, in the discograpy following Aretha's interview, that 1979's LA DIVA was the "nadir" of her entire career. It may not be Aretha's finest hour but she has never been in better voice. Her instrument was at its absolute glorious peak during that 4yr period from 1975-79. For Arethaphiles, that alone, is cause for celebration, but there's a lot more going on here than just the VOICE. In full disclosure I must confess that I played certain tracks from this album almost daily, for several years and that I adore the front cover photo. You may be too young to remember, but when this album was released the the word "diva" was very rarely used in everyday speech, nothing like it is today. As always Aretha was setting the stage for things to come.

Van McCoy's syrupy strings and the Ray Coniff Singers type back-up vocal arangements nearly overwhelm the two torch songs, "What If I Should Ever Need You" and McCoy's own "You Brought Me Back to Life"; yet the melodies and lyrics are touching, and Aretha's vocals convey such a heartbroken though restrained mania that both tracks end up being unforgettable. I'd love to hear her sing these songs w/ only piano acccompaniment.
Her son Clarence joins her on his own compostion, the lovely aching ballad, "You Were Made for Me." It's about as close to a Marvin Gaye (think a teen-aged Marivn)/Re duet that were ever gonna get.

It was the disco era and on her final Atlantic effort Lady Soul took the full plunge. Her self-penned "Ladies Only" (#33 Billboard R&B Singles Chart), released the same week as the much more successful dance song, with a similar title, Kool and the Gang's "Ladies Night, was the lp's first single. While well sung, it's corny and lacking in her trademark Re-funk. She also wrote "Only Star" which is pure Devine Diva Drag-Queen Disco, completely irresistable. Though not a huge disco fan I'll take Re's few attempts over the typical Donna Summer fair any day. The album's worst song, another disco entry, "The Feeling", (a rip-off of the Melba Moore dance hit "This Is It") frantically goes nowhere with Re's vocals buried way too deep in the mix.

Though this album is remembered as her failed attempt at disco, most fans don't realize that Re also tackled some rocking R&B numbers with a vengeance: the Emotions "Reasons Why", Zulema's "Half a Love" and what maybe the album's most inspired 5 minutes and 20 seconds, Lalome Washburn's "It's Gonna a Get a Bit Better". On that track Aretha sings, screams, shrieks, moans and hollers the same line over and over-about a million times, on top of a throbbing bass, but... never repeats the same phrasing once. Gospel fervor marries funk ballet.
Finally in response to Natalie Cole's pushing her off the sales charts by employing Aretha's own style, her Majesty delivers the self-penned, "Honey I Need Your Love", a recording that is absolutely perfect in every way. It should have been the first single even if it wasn't a disco song. She shows Natalie how to rock, shout and swing it right on this one (just as she had equisitely demonstrated to Natalie, on a previous lp's title song, "You", how one should nail a soul ballad.) Don't mess with the Queen. "Honey I Need Your Love" is essential for any Aretha career anthology, yet it has criminally never been available on any Aretha cd, ever. Call the Cops! There are over a 100 cds out there with the same 50 Aretha hits but there's never been a single one with any of the magical cuts from the following albums: LA DIVA, YOU, SWEET PASSION, WITH EVERYTHING I FEEL IN ME or ALMIGHTY FIRE! These dismissed, overlooked and forgotten albums represent the era when The Queen's voice was at it's most volcanically flawless, powerful, sweet and high!
ATTN RHINO: GET ON THE STICK!

This is my favorite Aretha Franklin recording. It is a shame it is not available in CD fromat. My all time favorite track is, "What If I Should Ever Need You". The song was also recorded by Gladys Knight and the Pips, but, as much as I love Gladys, Aretha's version is classic. Even the album is hard to find. Reviews of Aretha's music mention that the album did not sell very well. I think it is one of Aretha's best and it is my favorite.

As with most things disco, it took everything I had not to pound rail spikes into my ears after listening to this when I picked it up for $1 at Salvation Army. No wonder it was never released again! I lived through the 70s, and frankly the hard drugs and over-the-top sex meant that we weren't exactly challenging musicians to crank out their best work. Now, don't get me wrong: R&B, rock, etc. had their moments, but disco? Burn your nylon shirt and polyester pants, Herb. You're embarrassing yourself.

I wish Amazon or whoever is responsible for CD's would make: You, With Everything I Feel In Me, Sweet Passion, The Almighty Fire, La Diva by Aretha Franklin into a CD.
Amazon.com should pressure Atlantic Records or whoever owns the music into CD's! I guarantee you it would sell like hot cakes! I have purchased all of Aretha's
CD"s when they were available through this site and will continue to do so! The reviews are what helps me to buy CD's that are hard to find!