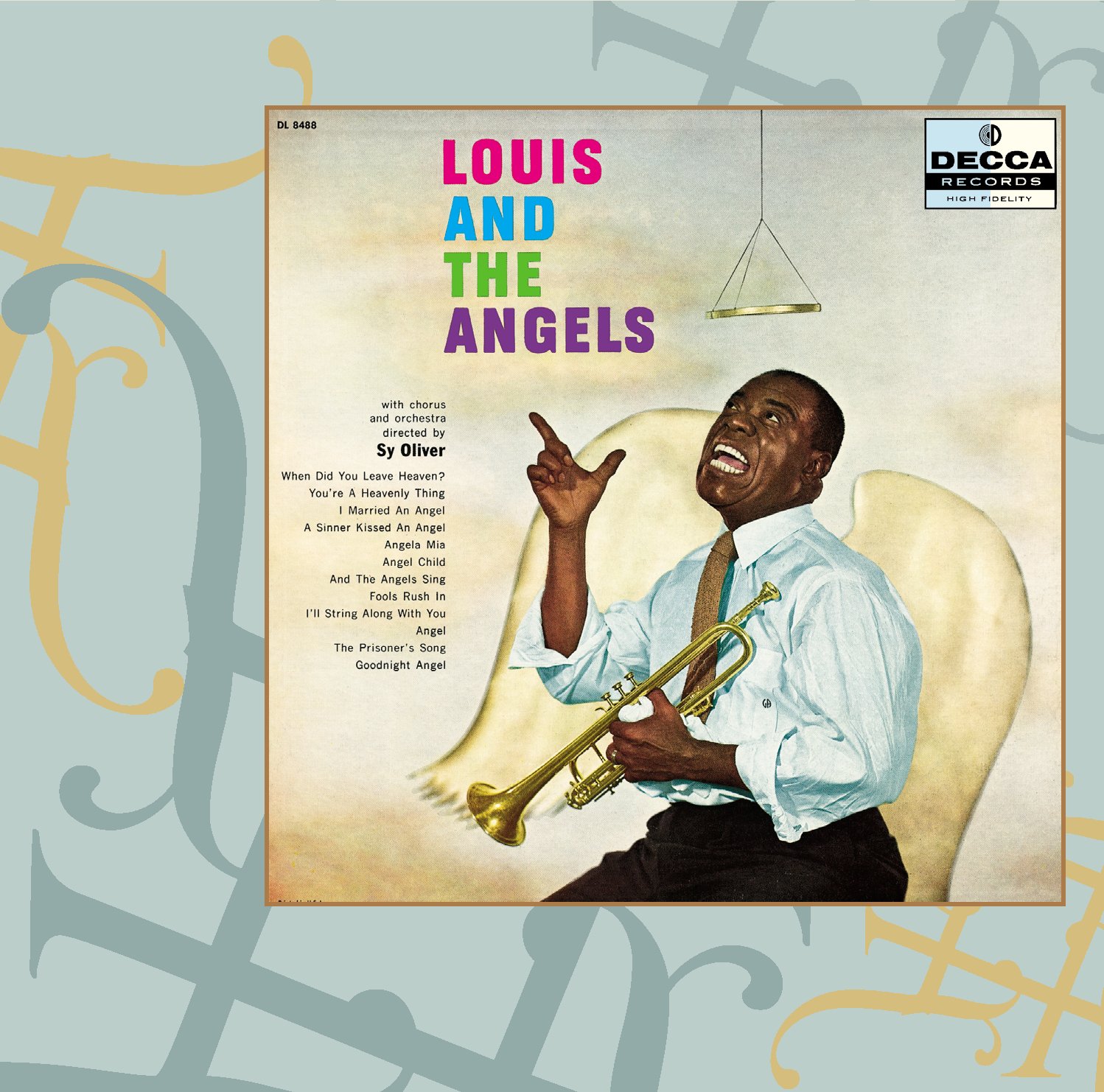 Louis and the Angels

View on Amazon
After his brief stay with Columbia Records in the mid-1950's, Louis Armstrong
made his return to Decca Records in 1957 where he recorded this special album
that found him in a heavenly position with just results. It was on January of 1957
that Armstrong ascended heavenward and produced, in just two days of session
work, one of his most unified concept albums as Louis And The Angels demons-
rated that a great artist could cross over and make a pop album, playing his own
trumpet and singing at the same time. With an enlightened track set that begins
the opening track When Did You Leave Heaven? (which was also a big band hit
for Guy Lombardo in 1936), it's well-proceded with other marvelous songs, like I
Married An Angel, Angela Mia, And The Angels Sing, Fools Rush In, The Priso-
ner's Song and Goodnight, Angel. The angelic Armstrong was divinely assisted
by the great arranger Sy Oliver, whose jazz pedigree didn't keep him from prov-
ing himself on the pop mainstream, while the line-up include pianist Billy Kyle, a
longtime member of Louis' All-Stars. In contrast of the all-spiritual presentation
Louis And The Good Book from 1958, Louis And The Angels contains only pop
songs and--in Armstrong's hands--proves that not only angels can sing but they
can also swing.

Maybe you don't need this concept album in your collection.The problem with LOUIS is that his discography is so full of treasures,that one is almost forced to settle for those budget priced packages that often mix everything.By buying those,you are bound to reduce a musical genius to bits.Let me try to sell this one for you by saying that the concept of angels is very tastefully done,even if the songs are not all great.The choir adds to the fun,and during THE PRISONER'S SONG,LOUIS actually ask someone why this particular song got there.Remember this,there was only one SATCHMO and there are still out there tons of imitators.If LOUIS had actually married an angel,think of what the world had missed.

On "Louis And The Angels" (1957) he is accompanied by the Sy Oliver Orchestra and Choir who lean on the pop side, but in this case it works just fine. Billy Kyle, an All-Star staple, is on piano. You still have Louis' fantastic vocal delivery and trumpet flourishes as well. The choir of course adds an angelic quality that puts these songs in a different light than Louis' straight "good ol' good ones" jazz recordings. There's romance here too, with "You're A Heavenly Thing", "When Did You Leave Heaven" and "I Married An Angel". Louis is right at home with these tunes. Another fine Verve reissue. Be sure and check out the companion re-issue, "Louis & The Good Book".