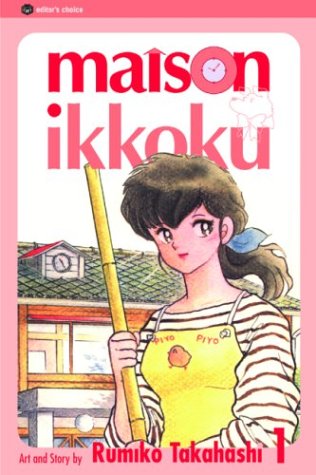 Follows the tenants of Japan's nuttiest apartment house where Kyoko, the manager, Yusaku, the college student, Mrs. Ichinose, the drunken gossip, Akemi, the boozy bar hostess, and Mr. Yostuya, the mooching peeper, reside.
View on Amazon
This rom-com of a manga is dangerously addictive. It's very funny and very sweet, all of the tenants of Maison Ikkoku are hilarious and have drinking problems. This series is really only available used or very exorbitantly priced but is well worth it.

This is my 7,5/10 mangaupdates review:
Rumiko can draw, design and is famous for starting strong but then never really closing a series after spinning wheels for volumes on end. This early work though has a very decent start, a somewhat dead middle with too much repetitive nonsense and a highly drawn out and predictable love polygon but i will admit that the series finishes strong. The narrative further has a bit of a problem with tone and the original pitch for the manga sounds better as Rumiko wanted to move on the other couples after resolving the main romance in a timely fashion. Mitaka's romance is further way more engaging and Godai is a pretty boring protagonist but beggars can't be choosers. I honestly can't recommend any of her other works due to the reasons stated above and her next best pieces, namely One-pound Gospel and Mermaid Saga, are only a 6/10 as they also deteriorate over time.
Read them if you must but check out Living Game (8,5/10) first as that early 90s apartment romance never overstayed its welcome and actually bothered to explore a relationship over time and the best 80s romance manga is the 10/10 Please Save My Earth.

It is a bit unfortunate that outside Japan the name of manga creator Rumiko Takahashi is often associated with the long-running series "Inuyasha." Don't get me wrong. "Inuyasha" is good; it is just overlong. Rumiko Takahashi's best work is, and will be, "Maison Ikkoku," a romantic comedy with a lot of crazy and adorable characters.

[STORY of VOLUME 1] Yusaku Godai cannot take it anymore. He is a high school graduate preparing for the upcoming university entrance examination, but he is living in the worst apartment, where eccentric residents never stop annoying him. Yusaku decides to leave the place immediately when a new manager of this old, rundown apartment arrives. Her name is Kyoko Otonashi and she is a beautiful, mild-mannered young woman. Yusaku, naturally, changes his mind. But there is one secret that Yusaku doesn't know about her.

Through the following episodes we are introduced to the characters surrounding Yusaku and Kyoko, and most of them are quite unique and some very weird, for example, Mr. Yotsuya, strange "gentleman" who likes on his neighbors more than anything; incredibly officious middle-aged woman Ichinose-san; and ever-drunken bar hostess, scantily clad Akemi-san.

Originally serialized in weekly comic magazine "Big Comic Spirits" from 1980-87, "Maison Ikkoku" is Rumiko Takahashi at her best. The artwork may look old-fashioned for younger readers, but this is a comic some generation in Japan including me grew up with. As the story goes on, these characters, for all (and because of) their flaws, become more and more endearing, and the romantic relation between Yusaku and Kyoko becomes engrossing.

[TRANSLATION] Viz Media edition's translation itself is not bad, but as another reviewer has pointed out, some words are misleading. Yusaku Godai, a high school graduate, is not a college student yet when he first appears, but he is often called "Mr. Flunk-out" ("ronin san" in Japanese original") which may sound strange to some readers. (A "ronin" in fact means someone who graduated from high school, but failed to pass the entrance exam of college.)

Some jokes are changed or removed. The little boy Kentaro's line "You can go!" on p. 54 is a good example. Actually Kentaro says literally, "(Girls) like a big...." and later adds "house." The terribly embarrassed faces of other guests including Yusaku and Kyoko cannot be understood without this sexual nuance.

[TRIVIA] The comic's story is set in somewhere around Tokyo and it is said the station in the comic is based on Higashi-Kurume Station of Seibu Railway, in the city of Higashi-Kurume where Rumiko Takahashi once lived.

The comic series has 15 volumes in all. The characters will grow up as the story continues, until the finale that is moving. Don't miss it.

There are generally romantic plots in Rumiko Takahashi's works, but never more so than in "Maison Ikkoku." More sedate than "Ranma 1/2," less fantastical than "Inu-Yasha," this is a straightforward romantic comedy with a hysterical cast.
Yusaku is a struggling young student in a shabby apartment, with possibly the worst neighbors in the world (a pervert, a hard-drinking gossip, and a sexy waittress). Nobody takes him seriously; his nickname is "flunk-out." He's about to storm out, claiming that nobody could study in Maison Ikkoku, when the beautiful Kyoko walks in the door, announcing that she's the new manager. Yusaku immediately is smitten with her.
Unfortunately their relationship gets off to a rough start, though Kyoko is kind and supportive of him. First his neighbor claims he's peeking into her room. Then Yusaku accidently gets into a few compromising situations with Kyoko -- and suspects that she has a boyfriend named Soichiro (which is also her dog's name). When the landlord comes to visit, Yusaku finds out who Kyoko's mystery man is, and why she still thinks about him.
Takahashi's artwork is a little rougher and smudgier here than in her later series, but closer to how people actually look. And, in keeping with that, they act very much like real people. Some of the supporting characters, in the first volume, border on caricature, but the primary people are 3-D. And while there's plenty of humor, Takahashi tugs at the heartstrings in all the right places (such as Yusaku wondering how he can ace his test without Kyoko encouraging him, or Kyoko thinking that Yusaku didn't mean it when he said he loved her).
Without Chinese curses or rampaging demons to deal with, the inhabitants of Maison Ikkoku can themselves be formidable problems. Misunderstandings, teen crushes, drunken proclaimations of love in the streets, domineering relatives and lost "perfect" spouses make it a lot harder to fall in love. You know what's got to happen, but somehow the Real World always intrudes.
Yusaku is a lovable naif. The poor guy wants desperately to tell Kyoko how he feels, but there's always something in his way -- especially his own financial shortcomings. Kyoko is a fantastic portrait of a woman who, while determined to stay faithful to her dead husband, is starting to appreciate her hapless tenant.
Those who enjoy a funny, sad, almost-squeaky-clean almost-romance (like most of Takahashi's other works) will definitely like "Maison Ikkoku." Move in and join the ruckus.

This is the first in a delightful series by Rumiko Takahashi, writer/artist of the highly recommended Ranma 1/2 graphic novels. This is a romantic comedy set in a small apartment house populated by eccentrics who do their best to thwart the budding romance between a naive and inexperienced university student and the, only slightly older, widowed manager. This series is quite simply delightful and charming and can not be recommended too highly.
Except for one teensy weensy problem.
The publishers, Viz, have decided to reprint the series in the Japanese format. That is by reading right to left. Their argument is that this recreates the Japanese experience which is, frankly, bollocks. My opinion is that they produce the books in this manner to save on costs. While you can get used to reading the opposite way from 'normal'. it isn't easy. This is a shame because it inserts a barrier to the enjoyment of an otherwise excellent series.