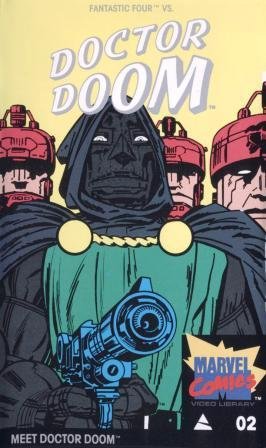 View on Amazon
I love these videos and have been collecting them since I was in grade school. Each video contains at least two episodes and for the most part they are centered around the character on the cover. The first episode involves The Fantastic Four and the first time they encountered Dr. Doom. Unfortunately this is not the Hanna Barbera cartoon series from the 60's but the DePatie/Frieling cartoon from 1978. But it is one of the better cartoons from that series (its not a bad series I just like the 60's one better) and is followed up by an episode from the 1981 Spider-Man cartoon entitled "Canon of Doom." Now don't be fooled this is not the immortal classic series "Spider-Man and His Amazing Friends" but the cartoon before it.
These large clamshell cases with their beautiful artwork look great on the shelf and hopefully you can find one that has been taken care of and a VCR to watch it on, then you could have a wonderful evening. Oh and each one comes with the signature of Marvel Comics Great, Stan Lee! Excelsior!