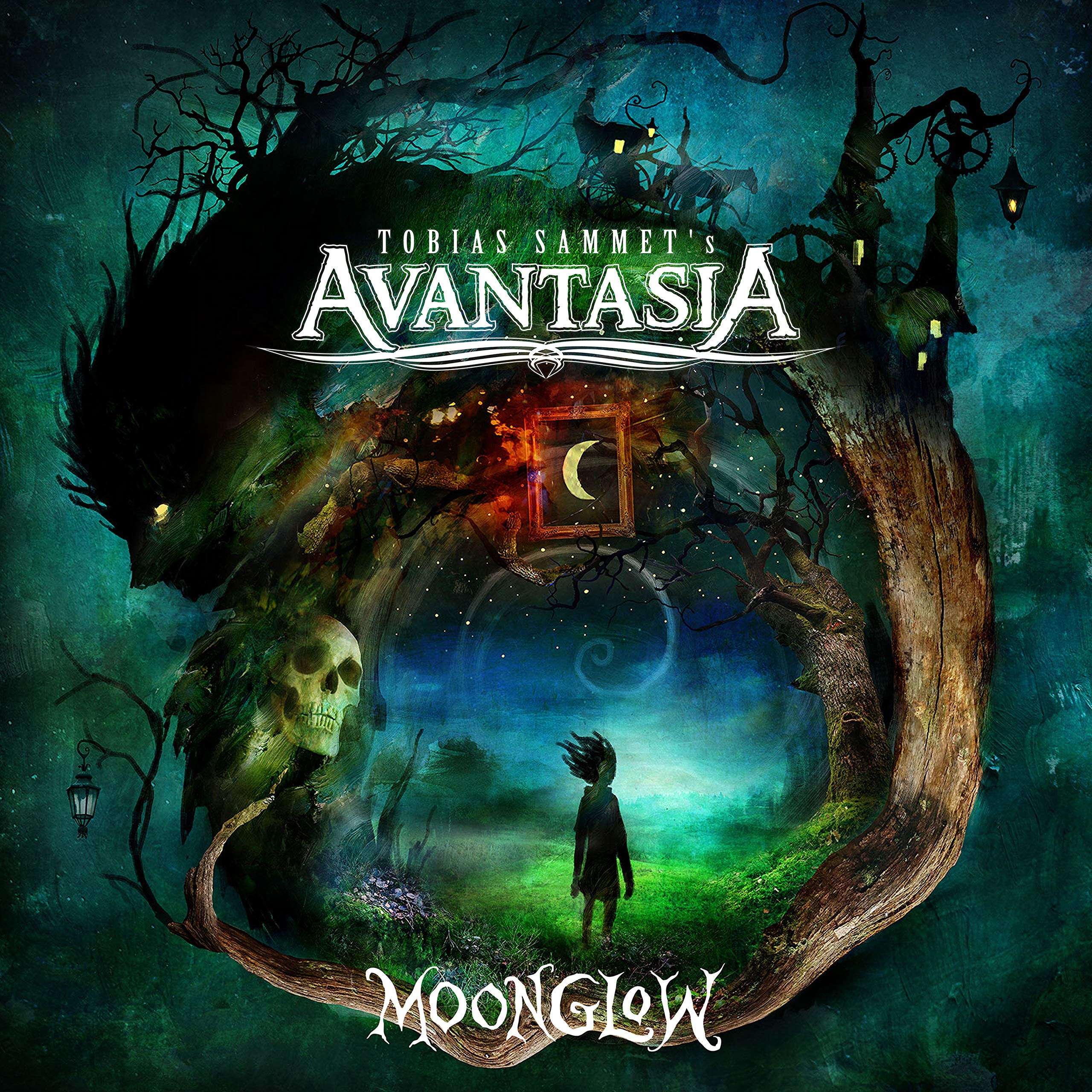 Posted by patachoup | Published 4 months ago

Productos que has visto recientemente y recomendaciones destacadas
›
Ver o modificar historial de navegación
Después de ver las páginas de detalles de productos, consulta esta sección para encontrar una manera sencilla de navegar a las páginas de tu interés.
View on Amazon
For long time fans who have missed the heavy power metal Avantasia from the The Metal Opera and Scarecrow/Wicked Symphony days, Moonglow will be like the return of a welcome friend. 2016’s Ghostlights hinted at this – somewhat of a comeback album in my reckoning. But that album still possessed some diversity and a steady rock rhythm throughout. Moonglow, on the other hand, reminds me of a combination of The Metal Opera and The Wicked Symphony. This should not be surprising when the vocal talents employed this time around include Hansi Kursch (Blind Guardian), Jorn Lande (Masterplan) and Michael Kiske (Helloween). There are some great guests this time for sure (as always), but Tobias really makes a huge vocal impact on these songs. His presence really anchors the core Avantasia sound.

One listen to the opening 9.5 minute opus and you will be hooked. Tobias doesn’t share the limelight on this piano driven rocker which features a more laid back approach with plenty of dynamic contrast. It serves as a very engaging warm up to the fast-paced “Book of Shallows” where Kursch, Lande and Sammet collaborate in a smoking-hot trip into the dreamworld. The ethereal title track follows – the only female-featured duet on the album. Candice Night (Blackmore’s Night) sounds incredible here – “the road aflame – fooling gravity – you follow the light.” Perhaps the most breathtaking song, though, would be the symphonic 11 minute “The Raven Child,” a song that really captures the essence of Avantasia both musically and lyrically as Lande, Kursch and Sammet once again combine forces.

Geoff Tate was briefly featured on the last album – his performance there one of his best in years. Fortunately, his role here has been expanded and so the tandem of “Invincible” and “Alchemy” marks the highpoint of the release. This is the best he has sounded for a long time – much better than on his own Operation: Mindcrime material – and is reminiscent of some of the Queensryche performances. As I stated in my review of Ghostlights, Tate can still bring it as these Avantasia sessions prove, but production issues on the OM material make him sound much less potent. Bob Catley contributes nicely on “Lavender,” and then the closer track (of original material) “Requiem For A Dream” featuring the powerful Kiske just simply shreds. I have to say it is surprising to hear Sammet cover Michael Sembello, but this metal version of the pop-synth “Maniac” from 1983’s Footloose sounds great.

Keep it metal. Thanks to Sammet and Paeth for making this album sound great.

Tobias is a genius. While not as catchy or memorable as Ghostlights, the musicanship/craftmanship on display is superb, with tons of big, bombastic songs. Also Jorn. Jorn is back. Jorn is awesome. I really love the narrative here, and while I wish the booklet gave a bit more hints at what is going on, I'm also having a blast trying to piece it all together. There's an allure to this album than Ghostlights doesn't have, and man, I've really been finding it hard to put this down.

solid musically in the vein of a kind of dance heavy rock & metal opera w/Steve Perry, David Coverdale style singing that's "dramatic" & theatrical. i never liked the song "maniac" & a metal version doesn't help, but other than that the rest of the song lyrics are thought provoking. Even though it's not my favorite style of rock I imagine It would be a blast to see this live.

The first half of this disc is pretty awesome. The back half gets a little repetitive and doesn't sound quite as inspired, though. Still, even at its weakest it's still a pleasant enough listen.

(Also, Hansi's guest vocals on The Raven Child is one of my favorite performances from him ever. It's a different kind of energy than he usually contributes and his voice just sounds so fantastic.)

I listened once and eh.... I listened twice and still eh.... I listened a half dozen times and then OMG this sucker is awesome!! I don't know why it took so long but, especially ALCHEMY has got me by the stones and I cannot stop listening to it!! Toby and everyone contributing to Avantasia, you've done it again!!

Assembling a slew of talented musicians seems to be a gift Tobias has, he is a master showman and a true musician. I can't gush enough about how much his devotion to making quality progressive/power metal music has made such an impact upon me. Other great vocalists have joined with him to form an army of unstoppable rock and roll. The stage show lasted almost 4 hours. Catch it if you can, you will be better for it. Otherwise, just "settle" for this album LOL!

This album is my new favorite Avantasia album. There are a ton of awesome epic tracks in this with great buildups and rockin' finales. The Raven Child, Ghost In the Moon, Moonglow, The Piper at the Gates of Dawn and Requiem for a Dream are super infectious and will have you replaying them over and over. This album rocks!

I like Tobias Sammett's voice, so thats why I bought this album once I realized he was the lead singer. I LOVE him as the front man for Edguy, so thought I would give his other band a chance. This band has more of a folk rock opera vibe to it, so again not for everybody. However, there are some good tracks but Edguy is far better.

The new Avantasia album is an entertaining release with some solid songs but it unfortunately ends up being one of the weakest albums in the project's discography. While there is plenty of variety covering symphonic rock, pop rock, power metal, heavy metal, AOR and ballads, the songwriting is not as captivating as it was in the past.

“Book of Shallows” is the heaviest song on offer and one of the best ones as well. It is fast paced and includes some powerful and heavy guitar riffs, a catchy chorus and nice vocal transitions between Hansi Kürsch, Ronnie Atkins, Jorn Lande and Mille Petrozza.

“Alchemy” probably contains the best chorus on the album and is another highlight. It is an atmospheric mid tempo melodic metal song with a darker atmosphere and some welcome heavier riffs. Geoff Tate blends well with Tobias Sammet and offers some nice vocal work that harkens back to Queensryche.

“Requiem for a Dream” is a fast power metal song with a soaring chorus and a major highlight. This is the only song to feature Michael Kiske on vocals and as usual he provides a stunning performance showing off his power and upper range. Although it is a signature Avantasia song it just works great and provides a twist with its atmospheric church chant intro and the inclusion of a bass solo.

“The Piper at the Gates of Dawn” is not perfect but generally works well and is another standout song. It is one of the longest tracks and the only to feature that many singers sharing vocals. The song includes some irritating modern keyboards and its chorus is similar to the Avantasia song Another Angel Down, but it is bombastic, catchy and features one of the best guitar solos on the album. In addition, guest vocalists Atkins, Lande, Martin, Catley and Tate do an admirable job and make the track a little more memorable.

Moonglow’s biggest flaw is the absence of catchy choruses on several tracks and the feeling of déjà vu in several song passages. The epic “The Raven Child” is the perfect example as it includes a Blind Guardian inspired intro, Iron Maiden and Savatage influences, an ending section that is identical to the Avantasia song The Scarecrow and a rather unmemorable chorus. Despite some great vocal work by Jorn Lande the whole thing ends up sounding unoriginal, boring and long. Another drawback is the general absence of guitar solos in the album. The last negative aspect of Moonglow is the fact that Tobias Sammet sings on all songs and doesn’t leave much room for the guest vocalists to fully unveil their talents.

Moonglow is definitely weaker when compared to the previous album Ghostlights. It is not a bad album as it is inspired, bombastic and offers some memorable moments, but it is not great either. It will probably sound good and interesting for someone not familiar with Avantasia, but for older fans it has unfortunately little to offer.

I have all Avantasia and Edguy stuff and I think Tobias is a musical genius in his style, able to come up with great songs, melodies, powerful anthems, even nice and gripping lyrics and stories, and to surround himself with luminaries in this Avantasia band. I totally disagree with the reviewers writing this is not as good as before. What??? what is missing? once again plenty of good stuff and i never want to push "skip". All the ingredients are still there, I love this album. Period. My opinion. Definitely not below standard. I would rate it as high as the 2 or 3 previous ones, which were damn perfect too.

I got into Avantasia in the summer of 2005 when I bought a copy of the phenomenal Metal Opera Part 2 and have been following them ever since. I remember all of their subsequent albums being released, and I can honestly say that this one probably tops them all. I was incredibly impressed with Ghostlights after being a little disappointed with the Mystery of Time and really didn't know what to expect from this release. I decided to pre order anyway, and am very glad I did! As soon as we hit that first incredible chorus from "Ghost in the Moon" I knew this album was going to be something else. It really is a masterpiece from beginning to end (with the possible exception of the maniac cover - Firewind already did the definitive metal cover of that one! And it feels a bit out of place and unnecessary) but yes, all in all a brilliant album that I would highly recommend to anybody. Certainly metal album of the year so far for me - it'd take something pretty incredible to beat this!