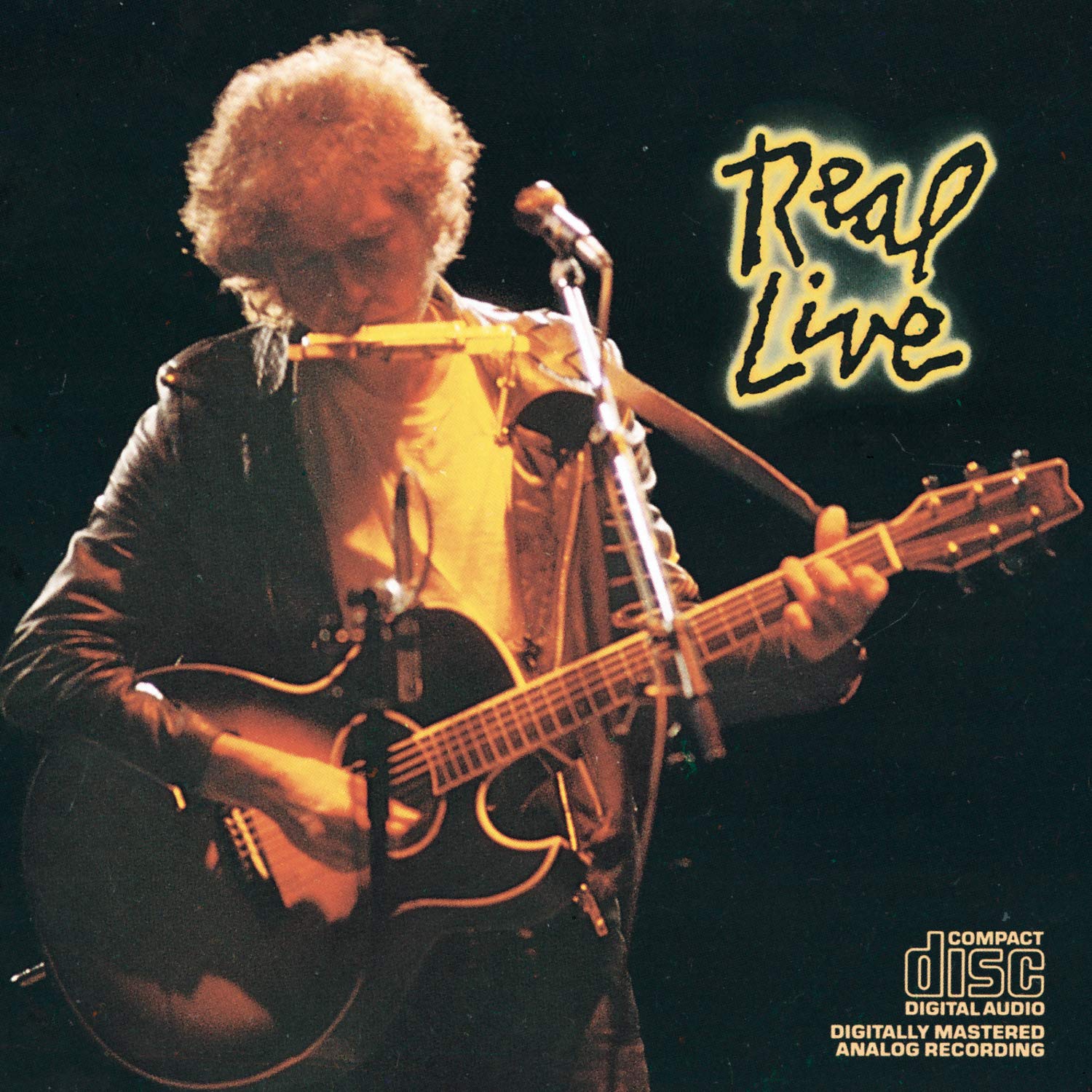 View on Amazon
love this CD because its a mix of acoustic and rocking versions of some of Bobs classic songs and songs off Infidels. Backed by a small but excellent band that features former rolling stones guitarist Mick Taylor, blues breaker drummer Colin Allen on drums ex-Faces' keyboard player Ian McLagan and bassist Greg Sutton, Real Live kicks some rocking life into some Dylan tunes.
"Real Live" was the 1984 european tour that ended with a huge concert of 75,000 at wembley in the UK. ( You can see on utube videos of the wembley shows as well as others in germany and spain.)
It starts off with Highway 61 is played as a chuck berry style rocker and moves along nicely compared some of the plainer versions i've heard .
Maggies Farm starts of with great energetic shuffle drum riff and Taylor on slide guitar . This is is my favorite version ever of this song because Dylans vocals are great here and Taylor slide guitar riffs and fills are just So good ! Great energy.
"I and I" is haunting with the band playing in a more minor key, compared to the infidels which featured more of Knoflpers style guitar style. Boths versions are great though.
"Licence to kill" is done in a powerful dark mood with Taylor doing some beautifully dark extended solo's. Dylans voice is great here and Ian McLagan on keyboards give a bit of a reggae feel.
"It Ain't me Babe", has just Dylan on acoustic and you can heard by the crowd, its an audience favorite. His harmonica solo is not as good as earlier versions though and is a bit repetative.
Next is a great version of "Tangled up in blue" , Dylans vocals and guitar are very good. He changes the words a bit, but compared to other versions, this one is more energetic.
"Masters of War" is one of my favorites with its dark mood and Taylor's very melodic lead guitar. Its much better than the Infidels version.
"Ballad of a thin man" .. i usually skip this one..
"Girl from the North Country" is excellent. Just Dylan on acoustic. The live ambience make you think you are actually up in the north country.
"Tombstone Blues" was always the finally jam song on this tour where they brought Carlos Santana on stage to play with the band. (since he was the opening act). Its a great rocking version.
Of all the live concerts form 1980 on, this captures Bob with more of a rocking sound that any other i've heard since. I love this CD.

Great guitar work and song selection make this one of Dylan’s best live releases and essential for his legion despite somewhat worn vocals. Highly recommended! Masters of War is special but there are no duds. Band and sound quality are superior to Hard Rain imho..

Right after Budokan, the best "regular" release live album he's done. Don't have it in front of me right now, but includes a couple of songs from this era that are pretty good, mixed in with the old stuff. And, of course, from an era where he still seemed to care about people recognizing the songs and the lyrics. One to get.

Dylan's albums were remastered in the 2000's. The release date when I purchased the cd implied it was a remastered cd. For Dylan's lesser albums (and I consider this one of them) I burned the album onto cd. With the release date and price I thought I'd upgrade for the better sound. The cd I received was from the 1980's and it looks like it was repackaged. If you are looking to upgrade from original vinyl you will be wasting your money. If you are trying to complete your Dylan collection and don't have this album then it might be worth your while.

I expected better considering who produced the album. I like that it mixes acoustic and full band performances but the performances seem to coast along with no real drive or excitement. Dylan is a man of mystery and this one I scratch my head on. Good sound quality. Average performance.

I ordered this album because it is one Dylan effort I did not own. So, I played it and was, frankly, lukewarm to it. But, knowing that most of Mr. D's stuff generally needs to grow on me, I waited and replayed it several more times. Each play managed to increase my appreciation, to the point that now I absolutely love this thing! I love every song version on this album, except for "Tangled Up In Blue", which I merely like. If only I could give it more stars!

This album is just one of those great but mediocre albums that came out in the 80s,i already had it in audio tape.Together with still life a live album by the Rolling Stones,John Lennon live in NYC and Hall and Oates live at the apollo,this album is a rare gem,it's like listening to a bootleg hard to find cd.This could have been greater if they release a special edition of this with bonus tracks such as All along the watchtower or either of the two between Mr. Tambourine man or Knock Knocki'n on heaven's door or Blowin'in thre wind or house of the rising sun.Still it worth a single penny for your listening pleasures.

If you want to hear one of this country's musical legend's, Bob Dylan, you would be wise to listen to this CD. The voice may not be the greatest, but the music and lyrics are toe-tapping, get down music.

Real Live is often talked about as a stop gap album. No. Real Live came out from the Dylan's re-emergence after the interesting Infidels resurrection. Although the material is familiar 'back catalogue', Dylan was actually reacquainting himself with these pieces. He'd been on the Slow-Train-Saved thing since the early 80's, a place that had no room for the Tombstone Blues. The European 1984 tour with English guys like Mick Taylor (the Stones), Ian McLagen (Faces) and Colin Allen (Bluesbreakers) made up the majority in the band and gave him a big distance from any certain salvation. Taylor might not make shapes but his guitar is a sophisticated poke in the ear. This is a band that can produce blood. The version of Masters Of War is unlike any other. Hard and weighted. The two Infidels tracks (I And I, License To Kill) are stripped down and seriously sung. The acoustic re-written version of Tangled Up In Blue is worth the price of the whole album. How to reclaim your own past. There's a lot more that could be said. I'm glad its back in my collection. Real Live, the real deal. And yes, you got it to me on time at a good price. We've all got to pay our way haven't we?

Unfairly dismissed live album. Much better than dylan and the dead for example.

I suspect this is going to take a few more listenings, but my initial response is that it's good and at times very good. Great musicianship but not always Bob's best live vocals.

Although this in-concert recording originates from the 1980s - when frankly, few of Dylan's contemporaries were making great records, 'Real Live' is nonetheless an excellent live album, in which an enthusiatic Dylan, fronting a band featuring former Rolling Stone Mick Taylor and ex-Faces keyboard player Ian McLagan, runs through some spirited performances from his mighty catalogue. The playing is fiery, but tasteful, and though the performances aren;t definitive, they're still nonethless worhwhile. A better than average live album.

bob dylan with mick taylor , could not be better thank you

your collection with Amazon's pick list of old titles, you can't go wrong, they seem to work fine as far as I know but as we now have so many they don't get played that often!