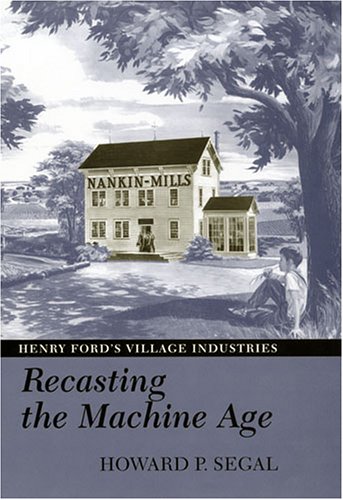 Recasting the Machine Age recounts the history of Henry Ford's efforts to shift the production of Ford cars and trucks from the large-scale factories he had pioneered in the Detroit area to nineteen decentralized, small-scale plants within sixty miles of Ford headquarters in Dearborn. The visionary who had become famous in the early twentieth century for his huge and technologically advanced Highland Park and River Rouge complexes gradually changed his focus beginning in the teens and continuing until his death in 1947.

Ford may well have been motivated to spend great sums on the village industries in part to prevent the unionization of his company. But these industrial experiments represented much more than "union busting." They were significant examples of profound social, cultural, and ideological shifts in America between the World Wars as reflected in the thought and practice of one notable industrialist.

Howard P. Segal recounts the development of the plants, their fate after Ford's death, their recent revival as part of Michigan's renewed appreciation of its industrial heritage, and their connections to contemporary efforts to decentralize high-tech working and living arrangements.

View on Amazon
This book has a detailed history of an amazing time in the history of Southeast Michigan.

Henry Ford is famous for setting up the basic concepts of mass production. And some of his factories Highland Park, River Rouge and Willow Run to name three were truly huge facilities producing huge numbers of vehicles, even aircraft. Yet at the same time he was concerned about the social aspects of the businesses.

In the early 1920's he was instrumental in Ford setting up nineteen smaller 'village industries.' Each of these industries were set up to provide some kind of easily specified component that would be used in Ford vehicles or manufacturing. These included things like voltage regulators, twist drills, manufacturing test equipment, etc.

After his death, in the late 1940's and early 1950's these nineteen was shut down, usually merged into a large factory in the newly formed parts division. This effort cannot be considered a failure. All in all, the nineteen plants were too small, too hard to manage.

Now similar outside suppliers provide such sub component manufacturing, but they are larger, and independently owned. This same concept is also followed closely in Japan where smaller independent suppliers make components for automobiles and other products.

This is the best kind of academic writing: direct, technically accurate and concise, yet intriguing, lively and informative. Segal clearly has affection for his subject, yet does not hedge on Ford's notoriously disagreeable qualities. A clear-eyed look at a complex man and his ideals.

This book is fabulous! It captures this topic better than any I've ever read. It's very interesting to me, and I'm not in the least way associated with Ford. Great book and enjoyable read!!