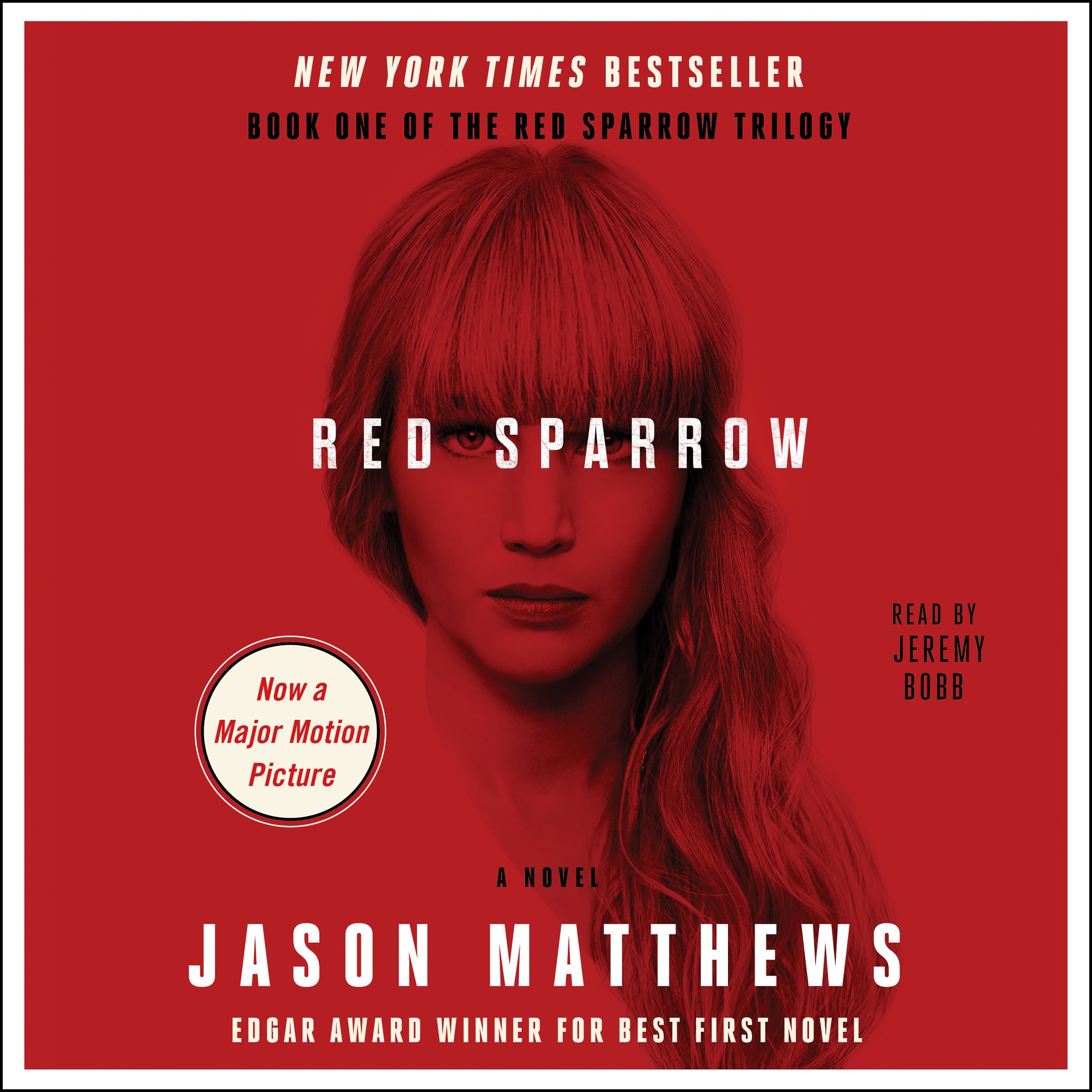 The start of a major career! A gripping, highly commercial espionage thriller written with the delicious insider detail and up-to-the-minute insight only known to a veteran CIA spook.

In today's Russia, dominated by Prime Minister Vladimir Putin, state intelligence officer Dominika Egorova struggles to survive in the cast-iron bureaucracy of post-Soviet intelligence. Drafted against her will to become a "Sparrow" - a trained seductress in the service, Dominika is assigned to operate against Nathaniel Nash, a first-tour CIA officer who handles the CIA's most sensitive penetration of Russian intelligence. The two young intelligence officers, trained in their respective spy schools, collide in a charged atmosphere of tradecraft, deception, and inevitably, a forbidden spiral of carnal attraction that threatens their careers and the security of America's valuable mole in Moscow.

Seeking revenge against her soulless masters, Dominika begins a fatal double life, recruited by the CIA to ferret out a high-level traitor in Washington - hunt down a Russian illegal buried deep in the U.S. military and, against all odds, to return to Moscow as the new-generation penetration of Putin's intelligence service. Dominika and Nathaniel's impossible love affair and twisted spy game come to a deadly conclusion in the shocking climax of this electrifying, up-to-the minute spy thriller.

w
View on Amazon
As I draft this review of Jason Matthews' novel, Red Sparrow, a film based on the book is showing in theaters nationwide. I've decided not to view the movie. I can't imagine that any screen adaptation, however skillful, could possibly do justice to this extraordinary tale of espionage.

Authentic detail of espionage
Red Sparrow is not a conventional spy story. True enough, it's well-written, ingeniously plotted, and endlessly suspenseful. On that account alone, fans of John le Carré, Joseph Kanon, or Alan Furst should appreciate it. But the book rises above the level of the genre because the author has infused it with detailed, intimate knowledge of authentic espionage tradecraft employed both by the CIA and by Russia's Foreign Intelligence Service, the SVR. Red Sparrow also reveals a great deal about the SVR's structure and practices. I was so taken aback by the level of detail that I checked a number of details at random; they all proved accurate. I can easily imagine this novel being passed around at the CIA training center known as the Farm as a fictionalized (if no doubt exaggerated) account of what an officer might encounter in the field.

Two central characters in a cat-and-cat game
The Red Sparrow of the title is Dominika Egorova, a niece of the First Deputy Director of the SVR. When an injury ends her promising career in the ballet, her uncle presses her into the intelligence service, sending her first to the standard officer training and then to "Sparrow School," where she is taught seduce enemy agents. Her assignment is to entrap and recruit Nathaniel Nash, the young CIA officer who is known to be the handler of MARBLE, a high-level mole in the SVR. "Nate was one of a small group of CIA 'internal ops' officers trained to operate under surveillance on the opposition's home ground." His assignment is to recruit her once she has managed to enter his life. The result can't be described as a cat-and-mouse game. It's a cat-and-cat game, and it's fascinating.

The supporting cast on the American side includes a pair of veteran CIA officers who assist and guide Nate as he maneuvers through his relationship with Dominika. There are also a sociopathic US Senator and a number of FBI agents who wander in and out of the background, all of them coming across as incompetent. (This no doubt reflects the ages-old suspicion between the CIA and the FBI.) On the Russian side, the leading characters include Dominika's uncle and several members of his staff at the SVR. One key figure there is a "poisonous dwarf" who serves as his counterintelligence chief. (He appears to be modeled on the five-foot-tall Nikolai Yezhov, a sadistic murderer who served for a year as head of Stalin's secret police. He was known as "The Poison Dwarf.") Vladimir Putin himself makes several cameo appearances.

About the author
Author Jason Matthews' official bio on his publisher's web site is worth quoting at length: "Jason Matthews is a retired officer of the CIA’s Operations Directorate. Over a thirty-three-year career he served in multiple overseas locations and engaged in clandestine collection of national security intelli­gence, specializing in denied-area operations. Matthews conducted recruitment operations against Soviet–East European, East Asian, Middle Eastern, and Caribbean targets. As Chief in various CIA Stations, he collaborated with foreign partners in counterproliferation and counterterrorism operations." In other words, it should be no surprise that Jason Matthews could write a book that exhibits authentic espionage tradecraft. Red Sparrow is the first novel in a trilogy of the same name.

This is one of the best books I’ve ever read. Why?

Matthews’ facility with language is amazing and precise. His writing paints images rich in color and emotion. The world-building is excellent.

The humor. Hero Nate Nash has two bosses, Marty Gable and Tom Forsythe. Gable’s sarcastic remarks, belied by his supportive actions, are truly funny. Heroine Dominika Egarova also thinks of her cruel superiors in hilariously rude terms. And the Sparrow School of seductive spycraft they blackmail her into attending (“training for ‘prostitutkas’, not staff officers,” she protests) teaches a list of techniques expressed in amusing metaphorical terms.

The characters are extremely well developed. There are many, but I never got confused because each has a distinct personality.

Complex plotting. Matthews skillfully conveys the conflict that arises when those who give orders have different priorities than those who put their lives on the line. The intriguing plot includes plenty of violence, tricky spycraft, and suspense.

I felt neutral about:
Nate and Dominika’s relationship. As they are mostly separated by thousands of miles, disparate governments, and secrecy, it’s minor.
The short recipes at chapter ends. I skipped over them.
While not exactly abrupt, the ending is an obvious segue into the second novel, but getting there was such a pleasure, I wasn’t upset.

Things I liked about Red Sparrow:
-The numerous acronyms, historical references, and details of spy tradecraft gave one the impression that this was an authentic insider account of espionage.
-The inclusion of many Russian words and phrases in contexts that were understandable, enabled me to add on to my meagre Russian vocabulary.
-The occasional appearance of Putin in the narrative provided a chilling reminder of what lays behind many current events.
-The tension in the spy world between using individuals merely as means to an end versus caring for them as human beings seems to a certain degree well illustrated by this book.

Things I initially like but grew tiresome:
-The inclusion of a recipe at the end of each chapter. Initially, this seemed to add a sensual flavor to the events described, but after a while it seemed the author had to struggle to find some means of including a munching event in every chapter. About midway through I began to skip these as it became too much like reading a cook book.

Things I disliked:
-Synesthesia, the ability to “see” sounds as colors, is in no way connected with the supposed ability to see auras, though the author seems to conflate the two.
-Dominika often seemed to me to be like a Barbie doll, an imaginary female that the author was merely playing with. She appeared to lack any genuine human characteristics or flaws (her temper tantrums were merely part of her “cuteness”). Similarly, Nate, despite originally portrayed as a highly skilled and intelligent spy handler, in Dominika’s presence becomes Ken-like, a puppy dog accoutrement to Barbie.
-Perhaps in the effort to make this a page-turner, the world of espionage is made to appear glamorous with visits to world class cities and numerous adrenaline pumping adventures, while in fact it most likely is filled with tedium and boredom, as more accurately portrayed in the novels by John le Carre.
-You can always tell the bad guys in this book. They all have some physical defect. This seems a huge slight to the many people who are handicapped in some way. Because one appears abnormal does not make them evil.
-Nearly all the men seemed to delight in “locker room” banter. This did not make them endearing to me as it appeared the author intended. It gave me new understandings of why some male dominated cultures are hostile and often abusive to women employees.

This book would be more aptly titled "Red Herring".
Factually inaccurate on so many levels, without any sign of coherent writing flow.
pg15...."and Vanya went back to Yasneneco first as Third Deputy Director, then second, until last year, when he moved into the First Deputy Director's office, across the carpeted hallway from the Director's office..."

...what...? If this was an isolated paragraph I'd be happy enough. But the whole book seems to be written in this lumpy and confused narrative, who's meaning and context can only be fully absorbed after 3 or 4 readings of the same paragraph. I paid for entertainment. I got the exact opposite. Chore-some at best.

I managed just 25 pages of this drivel, before throwing it in the garden. Sorely disappointed.
How this could even be considered on the same comparison scale to a Le Carre is beyond belief.

So good! The best book I've read in a long time.

I was captivated and enthralled by this book, and impressed by the author's evident, in-depth knowledge of the intelligence services and their methods. The product description on Amazon summarises just how great this book is, so I do not need to add to this other than to mention the wonderfully descriptive, original metaphors that had me reading many of them more than once, just to savour them.

I have learned only recently that this book will soon be released as a film. I think the plot and the action should translate very well, and Jennifer Lawrence is ideally suited to the role of Dominika. However, I doubt that cinematography and acting skills can entirely replace the eloquence of the book. Nevertheless, I look forward to seeing the film.

I have already added the next book in the Red Sparrow trilogy to my Kindle.

I loved this book. It is peppered with Russian words and phrases, which took a bit of getting used to and slowed up my reading to a certain extent, but the twists and turns in the plot were great. It was an added interest to know that the author had actually been a part of that clandestine world. I particularly appreciated the recipes at the end of each chapter, relating to something the characters had just been eating in whichever country they happened to be operating at the time. This was a novel addition and greatly added to my enjoyment. I will definitely be reading the rest in the series.