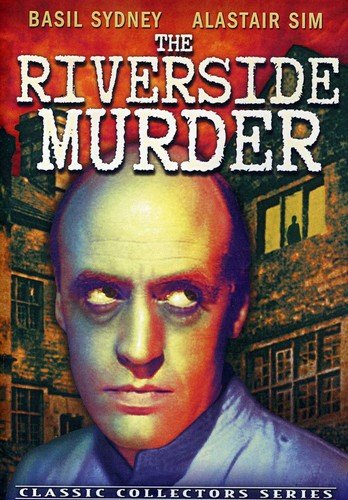 View on Amazon
Gotta love these old black & white murder mysteries. This one has exceptional plot, pacing, the unexpected, with a bit of humor & romance thrown in. It had its moments of humor such has "the body's gone & so is the rug." And it was great to see Reginald Owen, aka "Scrooge," at a younger time. This story was better than today's murder mysteries with blood & gore--just a clean murder mystery with the happily solved & ever afters in the end.

THE RIVERSIDE MURDER (1935) opens w/ the murder of Mr. Norman by an unknown assailant. He's been shot dead in his study. It's time to call Inspector Philip Winton (Basil Sydney). Quick as a flash, he and Sgt. Mac McKay (Alastair Sim) are on the case, questioning witnesses and running down clues. Of course, an ambitious reporter named Claire Haines (Judy Gunn) is interested in getting the scoop. Winton discovers a growing list of suspects, all having to do w/ possible financial gain from the late Mr. Norman. Then, someone else is shot, in the very same study, but the body vanishes! A third is gunned down, through a mail slot! Winton only has until midnight to solve the murders. Can he figure out this mystery, before everyone is dead? This is a very enjoyable crime yarn...

A neat little murder mystery. Certainly not Hitchcock but well directed, good plot, good script and good acting. Of course when you watch these one-hour depression era movies you have to know what your getting yourself in for but if you like good 'ol murder mysteries with the good guy wins and gets the girl, this is one of the better ones I've seen.

Good story line, and fun characters! There's nothing like the good 1930's mystery movies! Worth watching and worth watching again!

This was a good, short little British "whodunit." The Brits always seemed to know how to do a mystery with a bit of dry humor. And, of course, this era film always adds a touch of love at first sight romance. Light and enjoyable mystery.

Lots of murders for a short movie. Of course there is not the blood and gore like today's films, but who needs that. The two leads are just great. Good interaction and a nice romance too. As the corpses pile up, it becomes apparent that a money must be the motive. How does the murderer come and go so quickly and who will benefit in the end. The Brits can do murder so well and with charm. Sit back and enjoy a cup of tea as the story unfolds.

A very familiar plot, five men have a pact wherein they group-share a sum of money…if they live to share it. And then they start to die in the same house, the number dwindling down to two. To complicate matters there’s a faux journalist who won’t stay out of the way. And the Inspector meant to solve the case doesn’t seem all that confident.

However obvious the plot, it’s done at a quick pace with plenty of humor and features Alastair Sim (Scrooge by any name) in his film debut as Sergeant McKay.

I was preparing for a low-key quiet British drawing-room mystery, and instead was treated to this terrific high-energy gem from the 1930s. It features excellent subtle acting by the entire quick-talking cast, and fast-paced but followable plot line which is logical, and well-developed, and puts all the pieces together at the end, with barely a word wasted. I found the all characters compelling, credible, and interesting, and played with energy. One of my favorite lines, which has to be seen in context: "Oh, what a cad. You give a girl a bracelet and then refuse to take her out." All in all, a great relief from most modern movie-fare.

Although I love Alistair Simms, this film is dire! ... Must have been one of his first films

The movie may be excellent but the quality of the video is poor. Disappointing

The DVD didn't play well: kept pausing. I gave up in the end and watched it on YouTube